Israeli soldiers wounded more than 900 peaceful Palestinian protesters on the Gaza border for the third Friday in a row, while the Donald Trump administration prevents any action by the United Nations - Ben Norton reports

Israeli soldiers wounded more than 900 peaceful Palestinian protesters on the Gaza border for the third Friday in a row, while the Donald Trump administration prevents any action by the United Nations - Ben Norton reports 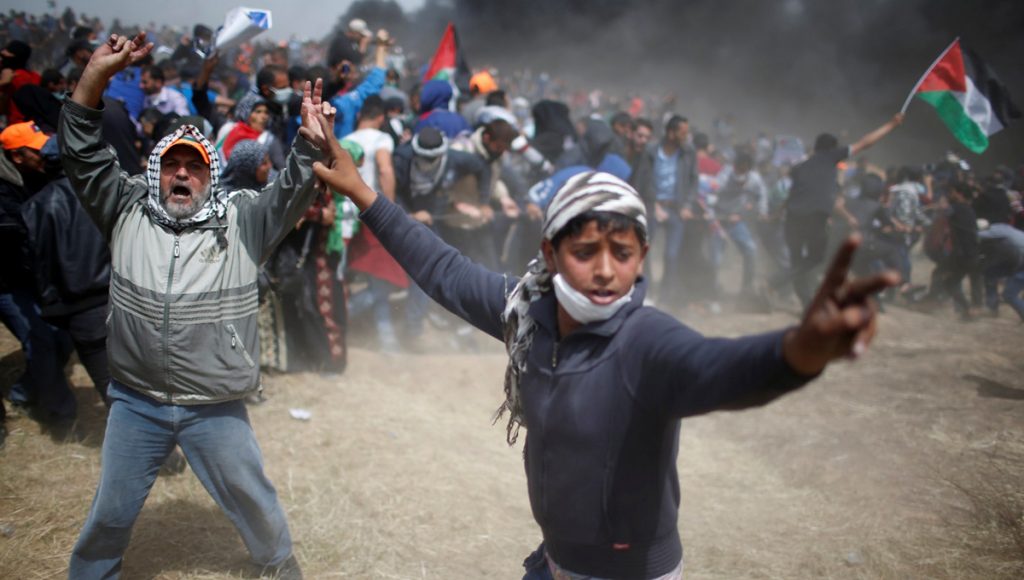 On Friday, April 13, an estimated 10,000 unarmed Palestinian protesters convened as part of the Great March of Return, demanding the right Palestinian refugees have under international law to return to their homeland and protesting a suffocating Israeli blockade that even Conservative former British Prime Minister David Cameron described as a “prison camp.”

More than 900 Palestinian protesters were wounded in the violent Israeli crackdown, according to Gaza health officials. At least one Palestinian was killed.

Thus far, dozens of Palestinians have been killed in the three weeks of Israeli attacks. Thousands of Gazans have been injured.

During the April 13 protest, the violence was once again clearly premeditated. Media reports noted that, in advance of the peaceful demonstration, the Israeli military had deployed tanks, drones, and snipers to the border.

Israel has claimed that the peaceful protests, which are known as the Great March of Return, are being used to cover up so-called terrorism. However there is no independent evidence that Palestinian demonstrators have used the demonstrations to launch any attacks. The most they have done is burned tires — and the Palestinian protesters are burning tires in order to fill the air with smoke and make it difficult for Israeli snipers to shoot them.

For more than a decade, Israel has maintained a crippling blockade on Gaza, which United Nations officials have said is illegal and must be lifted. The Israeli government tightly controls everything that enters the densely populated strip, and has in the past imposed a restriction on the number of food calories that can be supplied to the 1.8 million Palestinian residents.

The United States government, which provides Israel with $3.8 billion in annual military assistance, has shielded Israel at the United Nations and guaranteed impunity by blocking any action in the Security Council.

Human rights activists Medea Benjamin and Ariel Gold, from the peace group CODEPINK, confronted U.S. Ambassador to the U.N. Nikki Haley and asked her why the Donald Trump administration is blocking any kind of international investigation.

MEDEA BENJAMIN: We wonder why you’re blocking an investigation into the Israeli use of excessive force in Gaza. The international community would like that investigation to go forward. Israel deserves to be held accountable, just like every other country.

ARIEL GOLD: The killing of peaceful protesters, including a journalist wearing a PRESS vest in Gaza. And the UN is being blocked from investigation.

BEN NORTON: The United Kingdom has remained similarly quiet. However, after Israeli soldiers massacred unarmed Palestinian protesters the Friday before, on April 6, the head of the opposition to the British government, Jeremy Corbyn, condemned what he called Israel’s “illegal and inhumane” actions. When Israeli soldiers shot six journalists, killing a 30-year-old Palestinian reporter, the leftist Labour Party leader called the violent repression an “outrage.”

American politicians have largely been silent, with prominent members of both the Republican and Democratic parties refusing to speak out against Israel’s slaughter of unarmed Palestinians.

But five members of the House of Representatives from the Congressional Progressive Caucus released a statement saying that they “are deeply disturbed by the tragic loss of life.” The five progressive Democrats added that they “strongly reject the dangerous contention made on April 8 by Israeli Defense Minister Avigdor Lieberman that ‘there are no innocent people in the Gaza Strip.'”