Part 1 of Paul Jay and Aaron Mate’s interactive discussion with viewers about the real reasons Trump should be considered a traitor by the American people – From a live recording on August 2nd, 2018

Part 1 of Paul Jay and Aaron Mate’s interactive discussion with viewers about the real reasons Trump should be considered a traitor by the American people – From a live recording on August 2nd, 2018 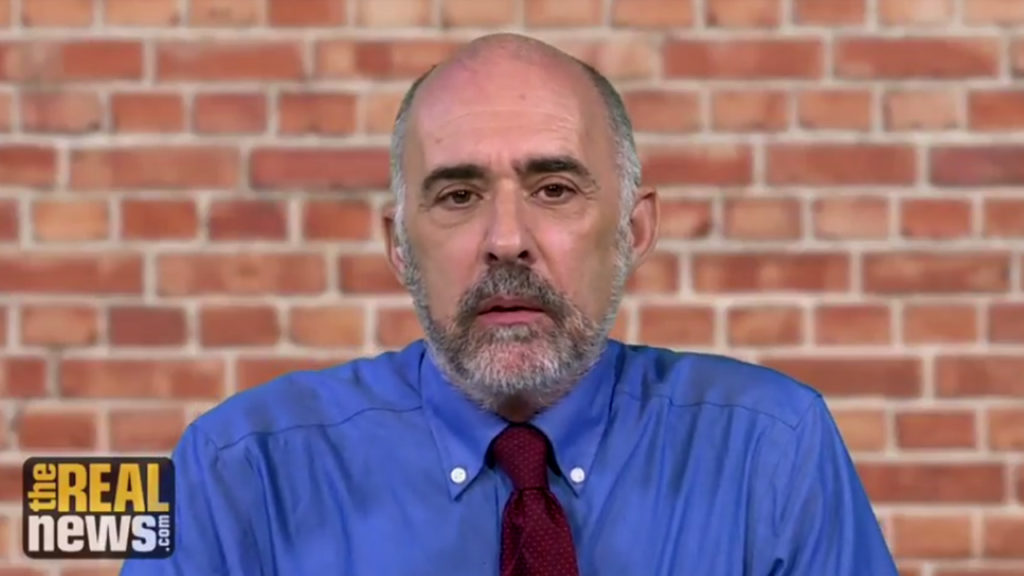 AARON MATE: It’s The Real News. I’m Aaron Mate. And we are doing a live Q&A with The Real News Senior Editor Paul Jay. He’ll be taking your questions throughout this hour, so if you have them, put them in the chat below wherever you’re watching, or send them to us on Twitter.

Welcome, Paul. Your thoughts on this question that we’ve been hearing about in the aftermath of the Helsinki summit, of Trump’s betrayal of the American people. Do you think that Russia should be the area of focus for this question?

PAUL JAY: Well, it’s hard to argue with anyone that says that Trump has betrayed the American people. And I’m sure he has, and will do so many, many more times. But simply meeting with Putin is not a betrayal of the American people. Now, we don’t know what was really said between Trump and Putin. I am not one that thinks there was some lovely conversations about arms reduction. Nor do I think that one should hope for such things out of a meeting between Trump and Putin. I don’t think either of them are peaceniks. But of course, Trump represents the most aggressive power in human history, I guess you could say. So they’re certainly in the same league as being dangerous characters. Trump and the American oligarchy have committed great crimes against humanity. That being said, I don’t trust any conversation between Trump and Putin. And not because either of them is the devil or are demons. Because both of them represent very reactionary states, and represent states that are essentially controlled by oligarchies, whether it’s the Russian or the American.

So yeah, I’m always wary of when two leaders like that get together. But to be wary of these negotiations or discussions, one should not feed the most reactionary fears and stoke the paranoia that harkens up all the ghosts and demons of the Cold War. One should have a sober appraisal of when a big imperial power meets a mid-level power, and look at what the consequences might be for the peoples of the United States, the people of Russia, peoples of the world.

And there’s a lot of reasons to think that Trump is betraying the American people, but not because he met with Putin. And I, you know, while I have many points of agreement with Bernie Sanders, I think it’s honestly- I don’t know. I guess outrageous. Bernie Sanders should not jump on this bandwagon. And it doesn’t, it says something- one should be careful of about Bernie Sanders’ vision of foreign policy, that he does jump on this bandwagon. Because the real reasons to fear this meeting between Trump and Putin and the real reasons for betrayal, well, first and foremost, this is the meeting of two climate science deniers. The most serious existential threat of our time and no one’s talking about that. And that’s a betrayal of the of the human species. And so we should be focused on that. We should be very concerned about that.

There was a letter going around a lot of progressive people signed, saying we shouldn’t critique this meeting because it’s a good thing when two nuclear powers meet. And of course, in principle it is. But John Bolton just appointed to the National Security Council as an adviser, I think is the position, a guy named Tim Morrison. Tim Morrison was against the START Nuclear, the treaty, Russian-American treaty. He’s against New START. He was one of the key guys pressuring Obama and lobbying for Obama to put a big investment into nuclear weapons, which he did. Apparently there’s under Obama, and continued under Trump, a trillion dollars over 10 years into developing new nuclear weapons. I mean, that’s a betrayal of the American people, both by Obama and now by Trump. We should condemn that.

And to think that, that Trump, who appoints John Bolton, who appoints a Tim Morrison- and of course Bolton and Morrison are on the same page- who are against any kind of nuclear restrictions on the American military and thus against any kind of arms treaty with anyone that might restrict Americans’ might, to think that is going to be the conversation between Trump and Putin, we should call that out. We shouldn’t be Pollyanna and create illusions that Trump is somehow going to be a peacenik with Putin. And we should try to think through what might- what those discussions might really have been. And yes, condemn them, because we condemn the oligarchies of both countries. But we don’t do it by jumping in the boat of this kind of American exceptionalism, American nationalism, rabid nationalism, where we are all of a sudden praising the CIA. And now we’re cheering on the FBI. Like, the organs of repression in the United States, who have systematically destroyed progressive political forces in this country for decades and spied on people. All of a sudden we’re rooting them on?

What’s going on in much of the liberal and much of the left in the United States is atrocious, and it’s- whatever the Russians did in terms of the 2016 elections is so insignificant compared to wrapping up this vile, rabid, chauvinistic language. And I’m really sorry to see Bernie jumping and using the same kind of words. We need to talk about the whole truth here, and not create the grounds for the kind of militaristic policies that we know Trump’s coming down the pike with, and I suspect is the real conversation between Trump and Putin, which is Iran. And what’s happening with Iran- you have Netanyahu threatening Israeli military action. The you have all kinds of back and forth rhetoric. The Iranians are now threatening they might block the Straits of Hormuz if the Americans start blocking Iranian oil exports.

We know John Bolton and Trump, not just Bolton, that the objective is regime change in Iran. And Iran’s going to be in a position with increasing economic pressure, that they’re going to need Russia and China in far more significant ways to buy Iranian oil and break the American sanctions. And that’s, in all likelihood, what Trump is really talking to Putin about. And I wasn’t in the meeting, and I guess other than a couple of translators nobody was. But if I’m looking at this situation, Trump is saying to Putin, we don’t want you to bail out the Iranian economy, and we don’t want you to bail out the Iranian government the way you did Assad in Syria. You know, we’re living with you saving Assad in Syria. But when we’re coming after destabilization of Iran, we don’t want you playing that role. And I have no idea what Putin responded with. But you know, Trump came out of those meetings smiling.

So yeah, do I think Trump has betrayed the American people? Sure. But for none of the reasons that corporate media and the whole Democratic Party establishment mostly are talking about.