Is Participatory Democracy the Solution to Venezuela’s Crisis?

Atenea Jimenez, speaker of a Network of Communes in Venezuela, says that grassroots, collective decision-making is the key to solving Venezuela's crisis

Atenea Jimenez, speaker of a Network of Communes in Venezuela, says that grassroots, collective decision-making is the key to solving Venezuela's crisis 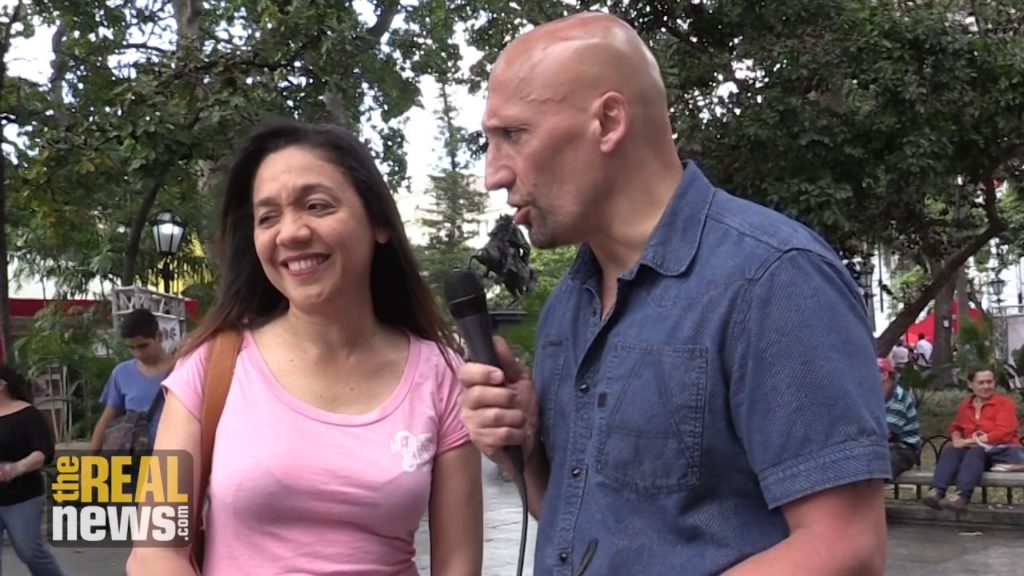 Dimitri Lascaris: This is Dimitri Lascaris reporting for The Real News Network from Caracas, Venezuela. Behind us is Bolivar Square, where the government of Nicolas Maduro has asked citizens to come forward and sign a petition expressing support for the government and its opposition to efforts by foreign powers to remove the government from power and replace it with Juan Guaido.

I’m here today with Atenea Jimenez. She’s a speaker for a network of communes. And I’d like to thank you for joining us today.

Dimitri Lascaris: Could you please tell us a little bit about what you do, and the communes, what their function is, and how they’re coping with the current crisis?

Atenea Jimenez: Basically, the work [we do] is to strive for the common good, collectively organizing and building from the bottom up a participative democracy. Trying to create socially owned business with direct social imput. To produce, distribute, and organize the consumption, distribution and usage of food and services.

We are also working on the subject of constructing a direct democracy.

Dimitri Lascaris: And if you were receiving the necessary, sufficient degree of support, do you think that your form of dealing with the crisis would be effective to greatly alleviate the suffering of the Venezuelan people in the current crisis?

Atenea Jimenez: On 2015 we proposed a Grand Communal Company of Production and Distribution of Food, where the farmer and the final consumer are set up through a system which would allow for reduced prices, discourage stock hoarding, and it’ll allow you to plan from production to consumption.

Atenea Jimenez: There is a cultural component to it, since in Venezuela we are used to importing all basic supplies, and in that context the international blockade was introduced. It affected us, causing a general economic downturn.

Now there are several movements, not only ours, which are proposing that the people take over production, distribution, and consumption. It’ll have to be well planned. But until now it has not been possible because there are forces trying to prevent this from happening.

Dimitri Lascaris: If Mr. Guaido were to actually take power from the Maduro government, do you think that this would be positive for the ordinary people, the working class, and the poor of Venezuela? Or do you think that that would be a negative development, and if so, why?

Atenea Jimenez: Our position, now, before he even assumes the presidency. There are already happening very dangerous things for the spokesmen, men and women for popular power. In the neighborhoods we’ve already had confrontations between opposition members and CLAPand Communal Council representatives.

We’ve had to evacuate our fellows because their lives were in danger.

We are not talking about the future. Right now we already have conflicts in the communities, as you can imagine, the Commune is made of smaller communities, where there is opposition to us, there are all kinds of political stances.

At the moment of Guaido’s self proclamation, there was a moment of victory for the opposition, which generates more confrontation within the people’s ranks. We are worried about this, because no one is paying attention or doing anything about it, amid the current larger political crisis, between the government and the opposition.

Our people, the Communas’s spokespeople, have been confronted in the neighborhoods, and even in rural areas. They have been threatened. It needs to be recognized the fact that there are communal lands which are still in dispute, farmers’s lands that are in dispute. And the larger contradictions and crisis have intensified such disputes.

And no one is attending to that, because there is a terrible ungovernability because of issues with police and district attorneys’ offices and institutionality in general. So as of now our people are more vulnerable than ever.

The biggest fear of all is that a self-proclamation of a president nobody voted for is legitimized.

If these kinds of things are happening now it is a risky situation in which, as Communa spokespeople, we all fear that Guaido gets confirmed as president because there would be a lack of guarantees for us to do our political job.

But in the context of the political dispute, the government has not assumed the defense of representatives, like those of CLAP and Network of Communers, in the field, where an oppositor may unleash on them their hatred against Maduro.

Those are the risks that as defenders of the people we run into every day.

Dimitri Lascaris: The narrative that we hear in the West, particularly in the United States, but also in other Western countries, like Canada, from political leaders on the right and also from the corporate media is that fundamentally, Venezuela’s problems stem from the fact that it is a socialist system, and it’s governed by a brutal dictator. Is that—is there any truth to that narrative, in your view? And if not, what do you think that Canadians and Americans and Europeans need to understand about what is really happening here?

Atenea Jimenez: The first thing is that in Venezuela there is no socialism. We have been constructing a social state of justice and equality. We have been building it, despite an international blockade, and despite the will of the great imperialistic powers trying to enter Venezuela for 20 years now. We have a democracy that mixes representative democracy with participative democracy.

But a capitalist and dependent system remains. We depend on minerals, oil, and lately gold extraction. We can’t say we are in a socialist dictatorship because it is simply not true.

Popular councils and communes are an example of direct and popular power, of exercising popular power where the population decides its priorities and its projects.

Before Chavez that was just not possible. You elected a congressman or representative and he got to decide which projects were the priorities of that community. But now people can decide for themselves in popular assemblies. This obviously is in permanent construction.

So what has failed is the capitalist dependent system, which we all have the responsibility to break. That is what we as popular power have been proposing for a while now; how to organize our people, our productive working people, our indigenous and farmers organized to rule themselves.