Is ICE Trying to Intimidate Anti-Trump and Anti-ICE Protest?

An investigation published in The Nation discovered that ICE has been tracking anti-Trump and anti-ICE protests in New York City. Activists find this especially disturbing in light of ICE's effort to deport immigration rights activist Ravi Ragbir

An investigation published in The Nation discovered that ICE has been tracking anti-Trump and anti-ICE protests in New York City. Activists find this especially disturbing in light of ICE's effort to deport immigration rights activist Ravi Ragbir 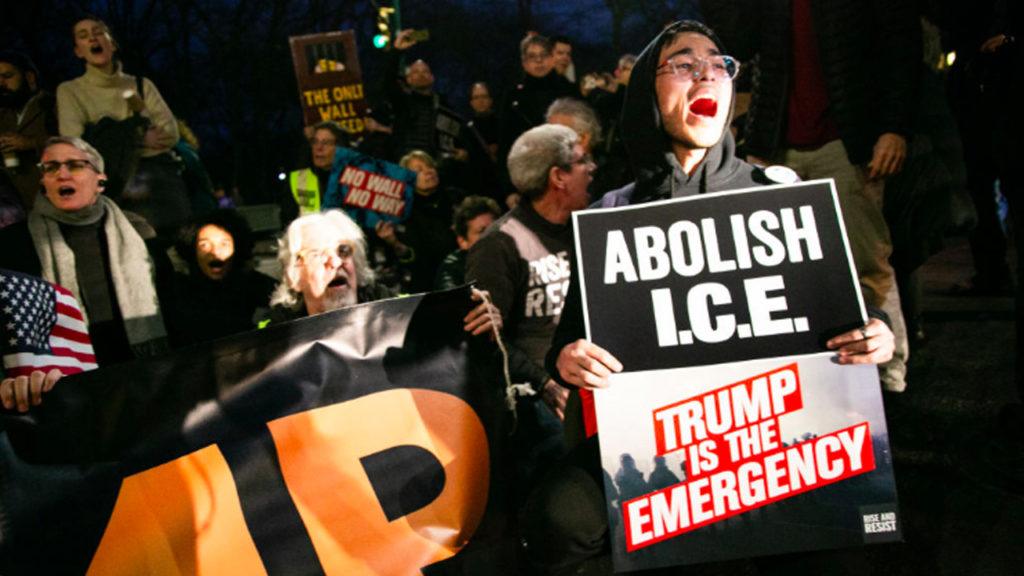 The Immigration and Customs Enforcement Agency, also known as ICE, compiled a list of anti-Trump and anti-ICE protests taking place in New York City during the summer of 2018. This is according to an investigation that was published in the magazine the Nation last week. The investigation, which is based on Freedom of Information Act requests, found that the information that ICE compiled included sponsoring organizations and the number of people who had said that they would attend, according to the Facebook announcement for the protest.

Joining me now to discuss the ISIS spying activity on New York City protests is the author of the investigation, Jimmy Tobias. Jimmy is a contributor to the Guardian, the Pacific Standard magazine, and the Nation, where he writes for the Cities Rising series. Thanks for joining us today, Tobias.

JIMMY TOBIAS: Thanks for having me.

GREG WILPERT: So exactly what kind of information did ICE collect on these protests, and how many of the protests? What did you find, basically?

JIMMY TOBIAS: Basically what we’ve found through a Freedom of Information Act request is that Homeland Security Investigations, which is an arm of ICE, collected information on a dozen protests in New York from late July 2018 to about August 2018. And it compiled information on a spreadsheet. Basically, the agency sent out an email to numerous officials, although they didn’t disclose how many, with a spreadsheet titled ‘Anti-Trump Protests in New York.’ And the spreadsheet contained information about a dozen groups and the protests they were planning in the city, including the date, time, location of the protest they planned, as well as the number of Facebook respondents, as you said.

And ICE sent this out–the reason it sent it out, it said was for situational awareness, to make officials aware of what was coming up in the city. But it was very striking, you know, that the spreadsheet that it collected, the spreadsheet that it sent out, was titled ‘Anti-Trump Protests.’ And most of the protests that were on this spreadsheet were specifically about immigration rights issues. You know, they were protests that immigrant rights groups were planning in the city. But a couple of the protests were not related to immigrant rights at all. One of the protests on the spreadsheet was a march against the NRA that the group Gays Against Guns had organized. And another one of the protests that was on this list was a protest organized by a sitting congressman, Representative Adriano Espaillat, who represents parts of northern Manhattan and the Bronx. And last summer he had organized a protest against a white supremacist group that had come to New York. And his anti-white supremacy protest was also included on ICE’s list of “anti-Trump protests.”

GREG WILPERT: Now, did you request the ICE data only for New York City? Or is that the only data that was released to you? And also, what prompted you to request this information in the first place?

JIMMY TOBIAS: I file a lot of FOIA requests with a bunch of different agencies sort of, you know, based on what I’m seeing in the news. And so I filed a request a year ago with the New York office of ICE, specifically asking for email communications among top officials, regarding certain prominent immigrant rights activists in the city, including Ravi Ragbir, who is the director the head of the New Sanctuary Coalition here in New York, which is a prominent immigrant rights group.

And so finally after a year I got this information back, and it contained–to my surprise, honestly, it contained this spreadsheet. I was pretty surprised they released this.

JIMMY TOBIAS: I mean, ICE officials basically just said that they collected this for, quote unquote, situational awareness, to make their officials aware of protests going on in the city.

And you know, I’ll point out that Homeland Security Investigations, which is the arm of ICE that sent this out, their broad mission is to investigate cross-border criminal activity. And you know, sending out a list of left-wing protests in New York really has nothing to do with that mission. So you know, there are a lot of questions still to be answered about why they have this list; whether it’s one of a kind, or whether, you know, this is some sort of ongoing effort by the agency to compile information about protests in New York. There’s just a lot of questions left to answer.

GREG WILPERT: So aside from the motivation, there’s also, of course the effect that it has on organizing the protest. Now, you spoke to some of the groups and lawyers that were involved. What did they say what the effect is? And also, tell us in this connection about the case of Ravi Ragbir, an organizer whom ICE has targeted for deportation.

JIMMY TOBIAS: That’s right. Ravi Ragbir is a prominent immigrant rights activist in New York who leads the New Sanctuary Coalition. And ICE has been trying to deport him for some time. And Ravi and the New Sanctuary Coalition and other immigrants rights groups in the city and around the country actually filed a First Amendment lawsuit in federal court against ICE, saying that ICE is specifically targeting prominent immigrant rights activists for deportation. And so Ravi and his attorneys and allies, you know, they basically told me that this document is further evidence that ICE is keenly attuned to left-wing protests and protesters. And they believe it’s further evidence that ICE is actually targeting some of those protesters for deportation.

And you know, I would also say that First Amendment experts I talked to for this story said that both social science research and common sense tell us that, you know, having your name on a government list creates a chilling effect. It frightens people. And so, you know, no matter what ICE was trying to do with this document, just the fact that it exists, you know, creates a chilling effect. And I’ve had numerous immigrants rights groups and activists reach out to me in the last few days expressing really deep concern about this, asking if their members were on this list, if their name was on this list, if their group was on this list; worried about, you know, members in their organizations that might be undocumented who attend some of these rallies and protests. And so it definitely is frightening for people.

GREG WILPERT: I can imagine, especially if they’re undocumented, of course. Well, we’ll continuing to look at this. I was speaking to Jimmy Tobias, contributor to the Nation. Thanks again, Jimmy, for having joined us today.

JIMMY TOBIAS: Thank you for having me.