After the International Court of Justice ruled in Iran's favor on U.S. sanctions, the Trump administration pulled out of a 1955 treaty and announced a review of its relationship to the court. Trita Parsi, author and founder of the National Iranian American Council, says that when it comes to Iran, the U.S. is acting like a rogue state

After the International Court of Justice ruled in Iran's favor on U.S. sanctions, the Trump administration pulled out of a 1955 treaty and announced a review of its relationship to the court. Trita Parsi, author and founder of the National Iranian American Council, says that when it comes to Iran, the U.S. is acting like a rogue state 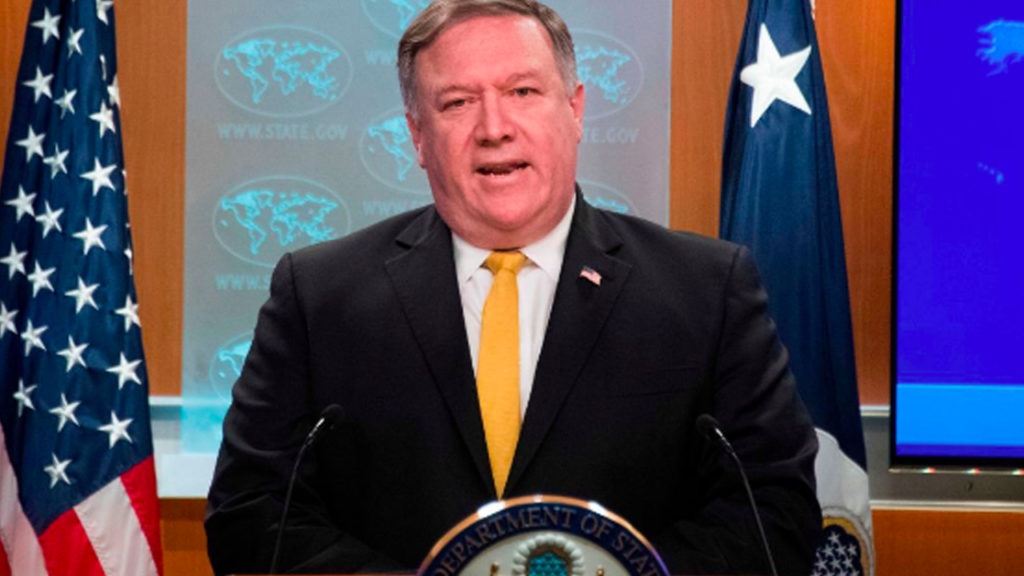 In its campaign against Iran, the Trump administration is not just targeting the Iranian government and its people with harsh sanctions and hostile behavior. It is also lashing out against anything it perceives to stand in the way, including treaties and international institutions that enforce them. This phase came this week after the International Court of Justice ruled in Iran’s favor. The court found that the U.S. is violating the 1955 bilateral Treaty of Amity, and ordered the U.S. to ensure that its sanctions do not harm humanitarian aid and aviation safety. In response, Secretary of State Mike Pompeo said the U.S. will pull out of the treaty.

MIKE POMPEO: I’m announcing that the United States is terminating the 1955 Treaty of Amity with Iran. This is a decision, frankly, that is 39 years overdue. In July, Iran brought a meritless case in the International Court of Justice alleging violations of the Treaty of Amity. Iran seeks to challenge the United States’ decision to cease participation in the Iran nuclear deal and to reimpose the sanctions that were lifted as part of that deal. Iran is attempting to interfere with the sovereign rights of the United States to take lawful actions, if necessary, to protect our national security.

AARON MATE: The White House was not done. National Security Advisor John Bolton said the U.S. will no longer respect an optional provision to the Vienna Convention on Diplomatic Relations for adjudicating disputes. Bolton tied that to a separate case involving what he called the so-called state of Palestine. Bolton also said the U.S. will now review all treaties that subject the U.S. to cases before the International Court.

JOHN BOLTON: They’re disappointed that the ICJ failed to recognize that it has no jurisdiction to issue any order with respect to sanctions the United States imposes to protect its own essential security under the treaty. Instead, the court allowed Iran to use it as a forum for propaganda. The Iranian regime has systematically pursued a policy of hostility toward the United States that defames the central premise of the Treaty of Amity. The regime cannot practice animosity in its conduct and then ask for amity under international law. Given this history and Iran’s abuse of the ICJ, we will commence a review of all international agreements that may still expose the United States to purported binding jurisdiction dispute resolution in the International Court of Justice. The United States will not sit idly by as baseless politicized claims are brought against us.

AARON MATE: In his remarks, Bolton called Iran a ‘rogue regime.’ But at least when it comes to this world court ruling, it is Bolton’s White House that has earned that distinction. Joining me Trita Parsi. He is founder of the National Iranian American Council. His latest book is Losing an Enemy: Obama, Iran, and the Triumph of Diplomacy. Welcome, Trita. What did you make of these moves by the Trump administration this week?

TRITA PARSI: I think it’s first of all quite fascinating to see how Iran and the United States are playing musical chairs here, because it wasn’t long ago that it was actually the Iranians that were constantly challenging international institutions, treating them as if they’re illegitimate, acting outside of the norms of the international community, and being accused by the United States as a result of that, of being a pariah and a rogue state. Now it’s the Iranians that are using the international system, the international courts, treating them as quite legitimate and using them in order to be able to score points against the U.S., which is acting like a pariah and a rogue nation. Because it’s violating not just this treaty, it walked out of the Tehran agreement, it’s in violation of the U.N. Security Council resolutions on the Iran deal.

AARON MATE: You know, when you mention taking pride in this, I went to this conference put on last week by UANI, United Against Nuclear Iran. And I saw on Pompeo, and Bolton, and also Joe Lieberman, Brian Hook, the Trump administration’s head of the Iran Action Group, all bragging about how their sanctions are crippling the Iranian economy, crippling the housing market, shedding tens of thousands of jobs. And the celebration was on open display. But at the same time as they’re doing all this they’re also claiming, and they’re saying this in response to this international court ruling, that they are- that Iran’s complaints against them in terms of the sanctions hurting humanitarian goods and aviation safety are not relevant, because the U.S. is taking steps to ensure that humanitarian goods make it to the people of Iran. And this is what Mike Pompeo said this week about this.

MIKE POMPEO: We have been clear. Existing exceptions, authorizations, and licensing policies for humanitarian-related transactions and safety of flight will remain in effect. The United States has been actively engaged on these issues without regard to any proceeding before the ICJ. We’re working closely with the Department of the Treasury to ensure that certain humanitarian-related transactions involving Iran can and will continue.

TRITA PARSI: Not only is he not being accurate, he is lying. The Trump administration has not issued a single [opac] license since they took power. They know quite well that they’re doing everything to scare banks away from the Iranian market, which then is affecting the ability for the Iranians to pay for medicine and medical supplies, even though that is supposedly exempt. So essentially what they’re saying, hey, we made those exempt. Yes, but you have targeted the financial system so harshly, so indiscriminately, so no bank is willing to handle transactions with Iranian banks. And as a result the Iranians cannot buy medical supplies, and their medical shortages are a direct result of the sanctions.

The same situation actually did exist under the Obama administration when they were in the sanctions phase, and I think they found it quite embarrassing, because the thing that they did not want to see was to see a humanitarian outcry similar to what existed during the Iraq sanctions. So they were quite aware of this, and were trying to see ways to minimize it. But it was a contradiction of their policy as well, because in order for the sanctions to really be effective on the financial system it needed to be indiscriminate, in their view. And indiscriminate sanctions would ultimately lead to medical shortages in Iran.

AARON MATE: OK. So speaking of financial transactions, and also the theme that you touched on earlier, which is the U.S. becoming increasingly a rogue regime and isolated from the rest the world, you’ve had this development in the past few weeks of the remaining partners in the Iran nuclear deal- Russia, China, the EU- forming this alternative mechanism with Iran that could shield their financial institutions from U.S. sanctions. And the hope there is that that will be enough to preserve the Iran deal or keep Iran in it. Do you think it will succeed?

TRITA PARSI: Well, I’ve never seen the Europeans do anything that has caused this amount of optimism in the markets, in the sense that this is something that has taken a lot of people by surprise. It seems to have instilled a degree of confidence. This is not going to provide the Iranians with the amount of economic interaction that they were promised and sanctions relief that they were promised during the nuclear deal. But the gamble is that will perhaps provide them with sufficient amount so that they will stay in the deal for another two years, and then everyone is just hoping that the Trump adminstration will lose and that the next American administration will not wage a war against the international system, will not wage a war against international law and the rule of law, and as a result try to come back into the Iran deal.

AARON MATE: OK. So speaking of war, let’s shift to the war zone in Syria, where the U.S.-Iran conflict is very much playing out. Just this week you had Iran firing missiles into Syria, killing ISIS leaders, apparently almost striking al-Baghdadi. This coming in response, Iran says, to the attack on a military parade in Iran last month that killed soldiers and civilians in response to that on Thursday. You had a top U.S. military official calling Iran reckless for that strike into Syria, because the strikes hit apparently, he says, within three miles of [inaudible].

TRITA PARSI: Yeah. This is quite strange. I mean, on the one hand the Iranian missiles apparently have become so strong when it comes to the precision, which is something they’ve been working on. So four out of the six missiles struck the room in which the ISIS leaders were having a meeting. Two of them struck in the courtyard outside. Al-Baghdadi apparently was late for the meeting, according to Iraqi sources, and as a result he was not killed.

But mindful of that, that we have shifted the focus towards Iran, why did al-Baghdadi and his ISIS terrorist leaders feel so comfortable to hold such a meeting so close to U.S. troops, only three miles away?

AARON MATE: A very important question, and we’ll leave it there. Trita Parsi, founder of the National Iranian American Council. His latest book is Losing an Enemy: Obama, Iran, and the Triumph of Diplomacy. Trita, thank you.