Katherine Moos: there is no inherent contradiction between Marxist political economy and intersectional analysis. Policy should be comprehensive but not color-blind

Katherine Moos: there is no inherent contradiction between Marxist political economy and intersectional analysis. Policy should be comprehensive but not color-blind 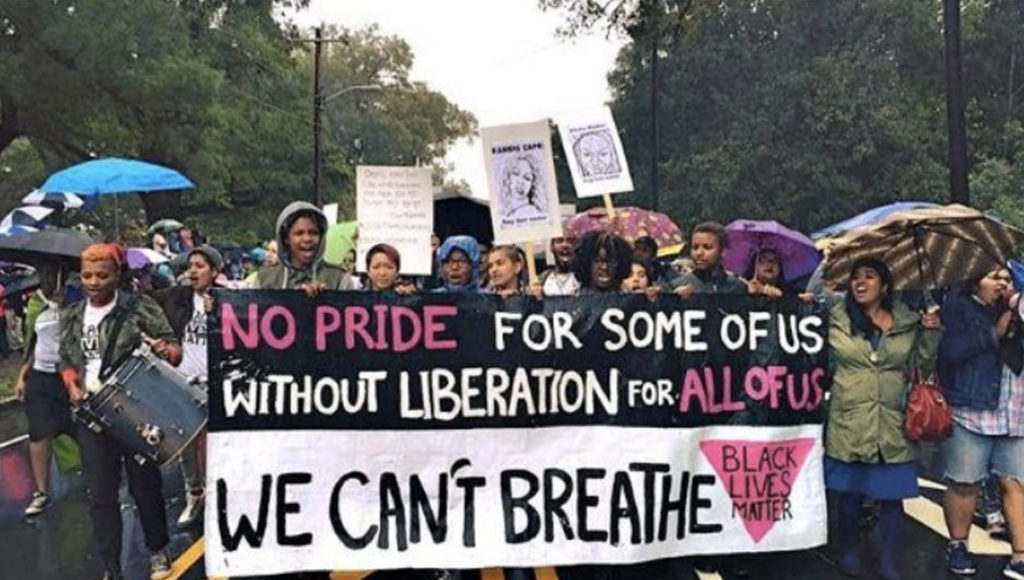 SHARMINI PERIES: Katherine, in the very first slide of your presentation, you actually demonstrate the potential of the strength of this intersectionality, and how it can be actually garnered in terms of coalition politics and policy making to actually combat various forms of oppression. How did this concept come about in the academy? I know there’s a history of it, but let’s start there.

KATHERINE MOOS: Sure. So the term intersectionality was first coined by Kimberle Crenshaw in the 1980s in an article about discrimination faced by black women in the labor market based on both their gender and their race. And the idea is that race, class, and gender should be analyzed in tandem. And this idea had been around in the work of other authors even before this term was coined. And actually, the work of Angela Davis is a great example of this. It’s very important insight that has become more and more influential, especially in sociology and other social sciences, including economics.

What’s interesting is that intersectionality theory has really taken off in the popular discourse, as well. It’s used to signify anti-racist feminism that’s queer and trans-inclusive, focus on disability rights, and so on. And this is a very important challenge to feminist movements which focus solely on the needs of middle class or professional white women with little or no understanding of how patriarchal structures and institutions are also related to white supremacy, capitalist exploitation, and other forms of oppression.

SHARMINI PERIES: All right, Katherine, now, there are some tensions you see between intersectionality and political economy, and Marxist theory of social reproduction, which you presented on. Tell us more about that.

KATHERINE MOOS: Yeah. So to start, I just want to say that I don’t think that there necessarily needs to be a tension between intersectionality theory and social reproduction theory. I do believe that the two can be compatible. That being said, there is a critique of intersectionality theory that its central metaphor, the idea of intersecting streets, is a flawed description because it implies that white supremacy, patriarchy, capitalism, and so on are distinct systems that intersect, whereas a more accurate and useful way to think about it is that these are all aspects of the same system. David McNally’s chapter in the new book Social Reproduction Theory does a really great job of developing this critique. And it should also be noted that the difficulty of the intersections metaphor is something that intersectionality theorists such as Patricia Hill Collins and others have also thought and written a lot about.

Another thing that can be troubling about intersectionality theory from a Marxist perspective is that, is that it can reduce class to the sociological concept of class, in terms of socioeconomic status. So for example, your income, education, cultural things. And it leaves out the political economic meaning of class, which is really about whether or not a person owns capital and their position in the wage-labor relationship. So by that I mean are you a wage worker, are you self-employed, a capitalist who employs other people, a landlord, et cetera, and how that determines economic interests and positions in society. So I think the real problem is that some post-modernist interpretations of intersectionality theory leave out this political economic understanding of class. And this can lead to some very distorted thinking that are actually antithetical to a Marxist understanding of political economy, and not very productive from the point of view of coalition building or working class organizing.

SHARMINI PERIES: Katherine, give us some examples of how this manifests itself.

KATHERINE MOOS: So I think in terms of coalition building what we would really like to see is that people understanding intersectional differences will show up for each other. They’ll show up for each other based on their differences, and then that will build a greater solidarity. What we can see, especially- I read a lot of, sort of, the online popular discourse- is that actually there’s a lot of infighting based on these ideas. And I think that that that is actually not the real spirit or meaning of intersectionality theory, and it’s actually a misinterpretation of this, this work. Another example that I, that I often think of actually comes from a blog post that I read, about linking things that are just sort of ordinary conditions of being a worker, being a wage worker, and considering that part of privilege. Considering things like having a 9 to 5 job, or taking public transportation, that these are, these are things that make you privileged relative to others, which is actually sort of an inverted understanding of, of class and of what it means to be a worker.

SHARMINI PERIES: All right, so Katherine, let’s continue on the issue of social reproduction theory and how all of this relates.

KATHERINE MOOS: Social reproduction theory is about the daily and generational care and nurturance of people, which reproduces their ability to work. And so social reproductive labor, which is also often called care work, takes place in the home, often as unpaid cooking, cleaning, and care. But it also includes work that’s done for pay, such as care services, other types of domestic work. But it also includes things like healthcare and education. So one of the main arguments of social reproductive- social reproduction theory is that this is a very important aspect of the economy which is often neglected or taken for granted, particularly because it’s often done by women either for no pay or within the public sector.

The reason why I believe that intersectionality theory and social reproduction theory are compatible is because they work on very different levels of analysis. Intersectionality theory is a political legal theory of discrimination; especially discrimination that is faced by people such as black women who are at the intersection of different marginalized identities. Social reproduction, on the other hand, is a political economic theory of exploitation; especially hidden exploitation that’s not traditionally accounted for in the study of the struggles between workers and capitalists. So for these reasons, I think that one theory really starts where the other leaves off, and that’s why I like to think in terms of intersectional social reproduction theory.

KATHERINE MOOS: Sure. So the key inside of intersectionality theory in the law is that people do not experience discrimination based on one identity or characteristic, but also at the intersection of these identities. So the classic example is Kimberly Crenshaw’s work, is that black women who are experiencing pay discrimination. So in this case, looking at just gender or just racial discrimination wasn’t enough. It was necessary to pay attention to the experience of black women as a specific group; not just as women, not just as black people.

Now taking these insights into economic analysis, we have to understand the role that law and policy have played in creating the context in which this kind of intersectional discrimination takes place. So one of the main major economic phenomenons of the late 20th century and early 21st century in the U.S. and around the world is the growth of inequality of income and wealth. And this was made possible by laws and other institutions which disadvantaged workers relative to capitalists, and also further disadvantaged specific groups of workers, particularly based on race, gender, immigration status, and so on.

The effect of these laws and policies can be seen in the data. The racial wealth gap is one startling example. The Economic Policy Institute and others have found that the median white wealth was 12 times higher than median black wealth. And this didn’t happen because of personal failings of black families, but because of discriminatory policies and institutions, such as housing discrimination and segregation, mass incarceration, and unequal access to public resources such as education.

SHARMINI PERIES: And finally, Katherine, let’s talk about policy here. Now, government policy is set by very powerful, elite groups. And women, people of color, trans people, religious minorities and so on, are always underrepresented in the halls of power. Now, is it enough to have conferences like this and talk about it just within the academic sectors here, or can we use some of the theories that you’re developing in the academy to analyze how power works and how social policies can be rewritten and reproduced within society to address some of these issues?

KATHERINE MOOS: I think it’s important that the left have a multipronged strategy. I think there are a lot of ways that our society and economy could be improved through social and economic policy. For starters, public investment in green jobs, infrastructure projects, paid care work at living wages with good benefits, as well as the expansion of legal protections and economic opportunities for marginalized groups would all be legal or policy solutions to some of the big problems that we’re facing. But it’s also important that we think about power relations within society and how they’re reproduced, and how we can envision how to reshape society in a more structural way.

So this forces us as academics, as activists, as everyday people, to think beyond simple policy fixes, but really think about how laws are created and whose interests are being represented, and what social and environmental cost. We’ve seen that the right has put a lot of time and money into research and ideological work to shape not only policy in a narrow, technocratic sense, but also in terms of a more long-term political strategy. And so I think it’s really important that the left does this, too. Even though right now we’re largely on the defensive and working to defend social economic and labor rights that are being eroded, it’s also a time when demands are becoming more ambitious. So I really see this as the time to be making bigger, bolder demands, but also remembering that we need to consider the basic power relations that play in our society and how we want to reshape them.

SHARMINI PERIES: I’ve been speaking with Katherine Moos. She gave a presentation at the APPEAL Conference titled Feminist Thought, Political Economy, and Law. And we’ll provide a link to the presentation just below the player, here. I thank you so much for joining us, Katherine.

Katherine Moos is an Assistant Professor of Economics at the University of Massachusetts Amherst and an Economist at the Political Economy Research Institute. She holds a Ph.D. in Economics from The New School for Social Research. Her research is in political economy and feminist economics, with particular interest in social policy and the U.S. welfare…

The Fight to Restrict Abortion Could Cost Republicans the 2020 Election

Activists Push Back Against Conservative Threat to Safe and Legal Abortion

Skin Color and Gender Determine Privilege and Income, Regardless of Educational Level