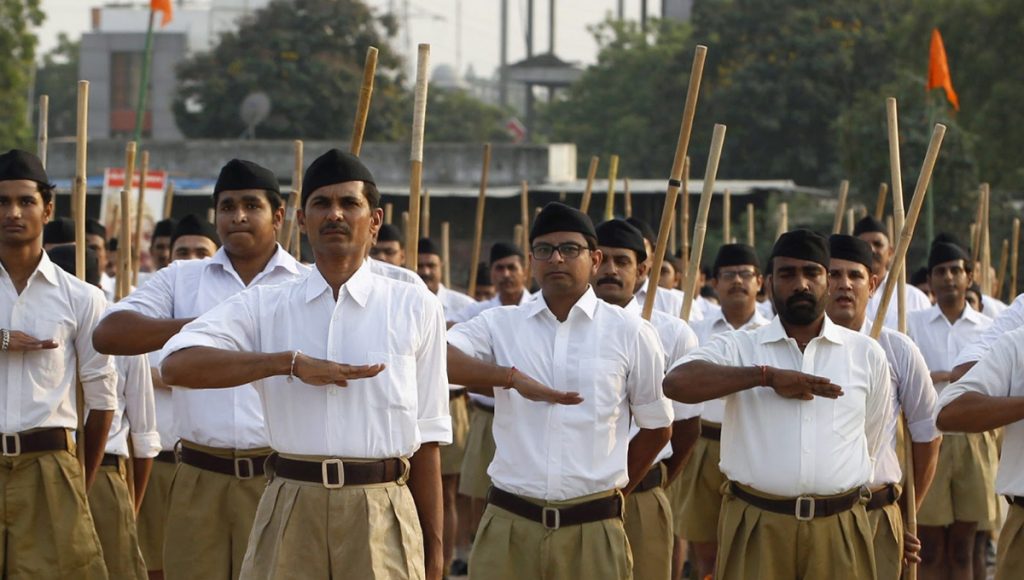 BEN NORTON: It’s the Real News. I’m Ben Norton. This is the second part of a discussion we’re having with the activist Amrit Wilson. Amrit is a writer, and she’s the founding member of the group, the South Asia Solidarity group. She’s also the author of several books.

In the first part of this interview we discussed Indian Prime Minister Modi’s trip to London to meet with British officials, and the large protests against Modi’s visit. We spoke of the situation of politics in India where there is a very far-right government, led by the BJP, which is a right-wing Hindu nationalist party which has been in power since 2014.

We spoke in the previous segment, Amrit, about violence spikes, specifically sectarian and communal violence, against women, Dalits, Muslims. But can we speak a bit more about the Hindutva ideology that is growing in India, and about the BJP? What is your take, what is the BJP and its paramilitary wing, the RSS?

AMRIT WILSON: You see, the RSS was founded back in the 1920s, and it always opposed Indian independence. It was a Hindu supremacist party, and it was based on essentially a Nazi ideology, although its activities where shaped around Mussolini’s black shirts. So we have people like Golwalkar, who’s one of the founders, talking about the way, Hitler’s policy of exterminating the Jews. And his approach was that this was a very good thing, because people from different cultures cannot live together.

So that is the basic approach of the RSS, which is the parent body of the BJP. So the BJP was a kind of, you know, fairly small party for many years. But after the beginning of the ’90s when India started to liberalize, the BJP shaped its nationalism around the question of neoliberalism.

And the other big party in India, which is the Congress party, was also a neoliberal party. It also was oppressive of minorities. But within the BJP we see something completely new, because here you have Hindu supremacy as a policy, as a system.

So this combination of Hindu supremacy and neoliberal policies became the BJP’s rationale. And they got going in a big way after 1992 when they, a very beautiful mosque, 500-year-old mosque, was pulled down by stormtroopers of the RSS and other similar paramilitary groups.

BEN NORTON: This is known as the Babri Masjid.

AMRIT WILSON: It was the Babri Masjid. I mean, after this there were massive, massive riots all over the country, and killings of Muslims took place. But after this the BJP began to gather a strength. And this was the policy right from then till now. It’s sort of virulent Islamophobia. Also attacks, many, many attacks on Christians, incidentally.

And of course, this is based on Hindu supremacy, where the Laws of Manu, Manu was a medieval law-giver who saw the so-called lower castes as, you know, an underclass who are not really worthy human beings. So this is a very upper-caste ideology within the BJP that began to propagate. And as a result we have horrific attacks on Dalits, which have been going on, you know, which have gone on for years, but which the BJP has intensified hugely.

So this essentially is its kind of ideology, and this is linked up to its being a modern, neoliberal party. You would have BJP members particularly, say, in places like London or New York which, who are, you know, who are corporate managers, who are hedge fund managers, it’s got its share of billionaires who seem very Western and very modern, you know, completely acceptable to a Western audience. But at the same time, the other side of the BJP, which is viciously Islamophobic, anti-Christian, and anti-Dalit, and hugely and horrifically patriotic.

BEN NORTON: Yeah, and this is actually very interesting. I think it shows a kind of new phase of fascism in the 21st century, if you will. If you look at some of these classical fascist movements they certainly, they were viciously anti-communist. In fact, the first people targeted by the Nazis were communists, socialists, labor organizers, trade unionists; they were the first ones in the concentration camps. But at the same time it’s true that early fascist movements were, they weren’t what we would call neoliberal today. They still believed in very strong state intervention in the economy. But it seems that today some of these far-right movements like you mentioned have been able to combine the communal violence, the ultranationalism, the hyper-sectarianism and patriarchal chauvinism of classical fascism with this market-worshipping neoliberal ideology that has dominated since the end the Cold War.

So we also know that when Modi was visiting London this week he was there in order to meet with conservative Prime Minister Theresa May in order to discuss creating a free trade deal between the UK and India. So can you speak specifically about some of the economic policies of Narendra Modi, which are actually not these kinds of populist policies that some far-right parties talk about? They’re actually, as you mentioned, an intensification of the neoliberal policies that India has pursued for the past two decades.

AMRIT WILSON: Yes, I would like to go into that. I just want to quickly say, make a couple of points around what you said. Firstly, I think it’s important to acknowledge that the BJP also is rabidly anti-communist and anti-left. And as you may know, India has a large communist movement, and they are being targeted viciously.

The other point is that Modi has a lot of similarities with Trump, and he’s also a great admirer of Trump. And the other person he is similar to and also close to is, of course, Netanyahu. All these three have similar policies, in this respect. As for the-.

BEN NORTON: And of course we saw, if I can jump in, we saw, Israel and India have become huge trade partners specifically, over weapons. In fact, India, India and Israel have become some of the largest purchasers of Israeli weapons. And when Prime Minister Narendra Modi visited Israel recently, there are, in fact, photos and video of Modi and Netanyahu on the beach together. Just, I think, encapsulating just how close they are, and how Zionism, as an ethnosupremacist ideology, a settler-colonialist movement, actually shares a lot of parallels with Hindutva.

AMRIT WILSON: Absolutely, totally. I mean, what many people don’t realize is that India is the largest purchaser of arms in the world, and a large proportion of those are from Israel. But also the Israeli arms, for example, the drones which India buys from Israel, are actually modified in Israel for use in Kashmir, or in central India.

And essentially yes, I mean, central India is the other, is the other part of India, which is profoundly affected by Modi’s neoliberal policies. What you have there is the land being taken over by mining corporates, and the people, many of them indigenous people, being displaced and killed, being thrown out. And of course they are resisting hugely. In some cases they’ve ave been successful in stopping the corporates. But not everywhere.

So this is another aspect of the kind of neoliberal policies which the government is pursuing. It’s privatizing a whole range of public utilities. It’s taking over, a lot of what it’s doing is also crony capitalism, it’s being handed over to Modi’s friends. People like Adani, you know, the big corporate Adani, which was mining coal in in India.

BEN NORTON: Well, unfortunately we’re going to have to wrap it up here. Are there any final comments you wanted to add, Amrit, about the RSS, the BJP, the politics in India, and Hindutva overall that you think a lot of viewers might not be aware of?

AMRIT WILSON: I think the only thing I want to say is that people should remember that there is a huge amount of resistance from the Indian people, and they do need people abroad to be aware of that, and to find out about that, because it’s all on the internet, anyway. And to show some solidarity. I think this is absolutely crucial. Indians are not just taking this lying down. They are fighting back.

BEN NORTON: Absolutely. And we also see that in London, where you and the South Asia Solidarity group organized protests against Modi. So thanks so much for joining us here at The Real News and providing your insight, Amrit.

December 24, 2019
Sign Up for Our Newsletter
Help Us Make Real News!