In Caracas, Ordinary Venezuelans Speak to The Real News About Venezuela’s Crisis 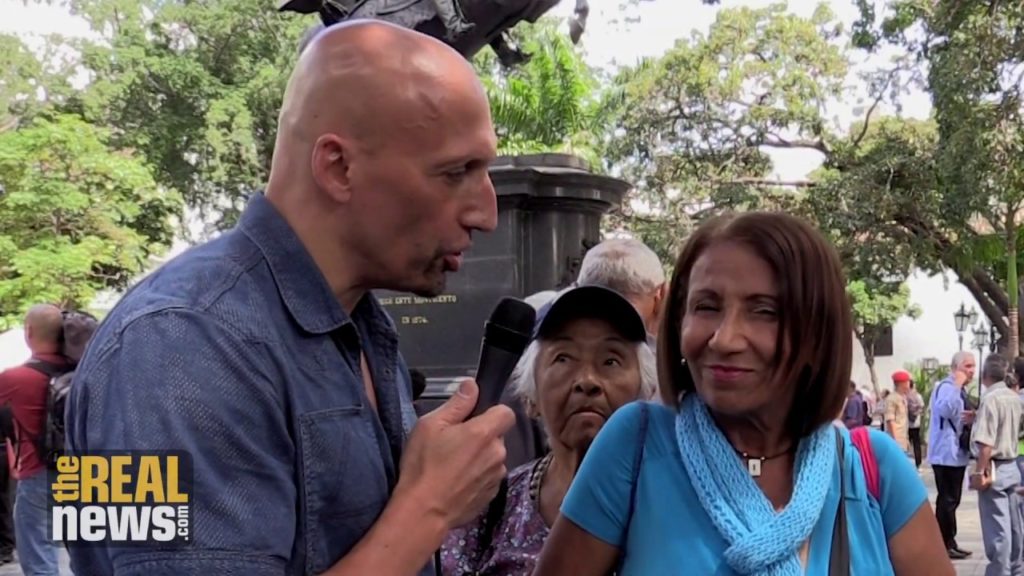 As The Real News recently reported, both supporters of Venezuela’s President Nicolas Maduro and those of his opponent, Juan Guaido, president of the National Assembly, held large, competing demonstrations in Caracas, Venezuela on Saturday, February 2.

Shortly following those demonstrations, President Maduro called on his supporters to assemble in Plaza de Bolivar in central Caracas for the purpose of signing a petition expressing their opposition to U.S.-led efforts to supplant his presidency with that of the little-known opposition figure, Mr. Guaido.

On Wednesday, February 6, I went to Plaza de Bolivar to gauge the public’s response to President Maduro’s petition. When I arrived at the square in the morning, by which time it had become already quite hot, dozens of people had already lined up to sign the petition.

As the day progressed, and the weather grew hotter, the queue of persons who had come to sign President Maduro’s petition grew longer and longer, and eventually consisted of hundreds of people. Days later, and as Max Blumenthal reported from Caracas, Venezuelan citizens continue to line up in ever larger numbers to sign this petition.

While I was present at Plaza de Bolivar on February 6, I had the opportunity to speak to a number of persons who had come to sign the petition, and this is what they had to say about Venezuela’s political and economic crisis.

DIMITRI LASCARIS: Why have all these people come here today?

ALEXANDER PEREZ, (R) Government Clerk: Well, we are here today, gathering signatures, against the intentions by the North American government, which are to invade and disrespect the sacred land of our country. We are gathering millions of signatures, that is what we are doing here today.

INOCENCIA PEREZ, Retired Worker: I came here very happy and joyful, because I want to stamp my signature against the empire and in favor of our commander Hugo Chavez and Nicolas Maduro.

MARCI VARGAS, Retired Worker: I am here to support our president because I understand the severity of the situation. It is something very delicate and very dangerous for us.

NATALIA GONZALEZ DE GARCIA, Retired Worker: I came here to defend my vote. I voted for President Maduro and my vote has to be respected.

ESTHER ALFONSO: We have a self-proclaimed president. Bear in mind that he is a congressman and President of the National Assembly, and he knows he can’t do that. Because on May 20, (2018) we voted for our President Nicolas Maduro. If they didn’t vote that is their problem, but I did and I am here today defending my vote.

MARCI VARGAS, Retired Worker: I think we run the risk of a civil war. Because most of the general population supports President Maduro, because we had elections and Maduro was the winner. Because most of the population came out and voted for Maduro. And that very same people will come out to demand their votes to be respected. That man (Guaidó) is an usurper, because nobody elected him, they didn’t participated in the elections, he wasn’t even a candidate.

LUIS “LAYO” GAZQUEZ, Radio Host, Le Ronca el Mambo: The President we elected, the one we voted for, It was Nicolas Maduro Moros, he is our President it was our decision in the elections held in May. That is our President. No. We believe it is unconstitutional that a character like Mr. Guaidó [claims the presidency], he wasn’t vote in by anybody which in the context of our Constitution is simply not allowed. This is just unheard of.

ESTHER ALFONSO: All that Trump wants is our country’s riches. He wants our oil, diamonds, water, gold, even coltan. That man wants to take it all.

And thanks to our God Jehovah, he gave us President Chavez who opened our eyes, and we will never be blind again, because he made us see. And what [Chavez] gave us, no Guaidó will ever give. He gave us a house, health care, education. And [free] education aside, all the riches from our oil, we have enjoyed. Before that only those working for PDVSA. And that is what Trump wants to steal.

INOCENCIA PEREZ, Retired Worker: We’ll be knocked out. If they take over our country we’ll lose our riches, because that is what they’re after our riches. Which is our people’s. Because our nature is rich, in oil and things like that. So what would happen if Guaidó takes power? God forbid. We’ll lose our social programs, our [Bolivarian] missions and the legacy of our commander, so I don’t think so. Because at no point in time I went and voted for him nor there was any election [with him on it]. So I don’t know, I don’t know what are the basis for his claim for an interim presidency.

DIMITRI LASCARIS: So, you’ve pulled something out of your purse. Could you please show it to the camera and tell me what it is?

This is the article, and it says: An absent president will proceed in the following cases: his death, his resignation, a Verdict of Destitution by the Supreme Court of Justice and a case of mental or physical disability.

And none of these conditions apply to President Nicolas Maduro; [he] is of a sane mind, he is physically present with us and was elected by us, on elections held on May 20 [2018].”

DIMITRI LASCARIS: And the article you were showing us just now, that’s Article 233, which Juan Guaido is citing to justify his seizure of the presidency, right?

MARCI VARGAS, Retired Worker: I think he wasn’t really minding the [Constitutional] Article, he just did it arbitrarily. Maybe he didn’t even read it and we should remind him everyday, so he reads it. And he’ll then see that he can’t violate that [Constitutional] article just like that. Because here you have a population who voted for president Nicolas Maduro, under the conditions given to carry on with that election by the National Electoral Council. So he has to respect those conditions.

DIMITRI LASCARIS: If Juan Guaido succeeds at becoming president and taking power, how do you think that will affect the well-being, the status, of people of African origin here in Venezuela?

LUIS “LAYO” GAZQUEZ, Radio Host, Le Ronca el Mambo: It’s just non-viable, that possibility of him becoming our actual president. Scratch that off completely. It’s just not possible. You see, here in Venezuela we are clear about what happened in Libya. We understand the modus operandi, the way that the American Government operated against the Libyan people. They set up a parallel government and then look for a way to legitimize it internationally. But no. Here in Venezuela it won’t happen. It just won’t happen. We are completely sure it won’t succeed.