The seven bills would steer US foreign policy towards international norms and remove support for human rights violators. While the chances are slim that these bills will pass, they outline a progressive foreign policy.

The seven bills would steer US foreign policy towards international norms and remove support for human rights violators. While the chances are slim that these bills will pass, they outline a progressive foreign policy. 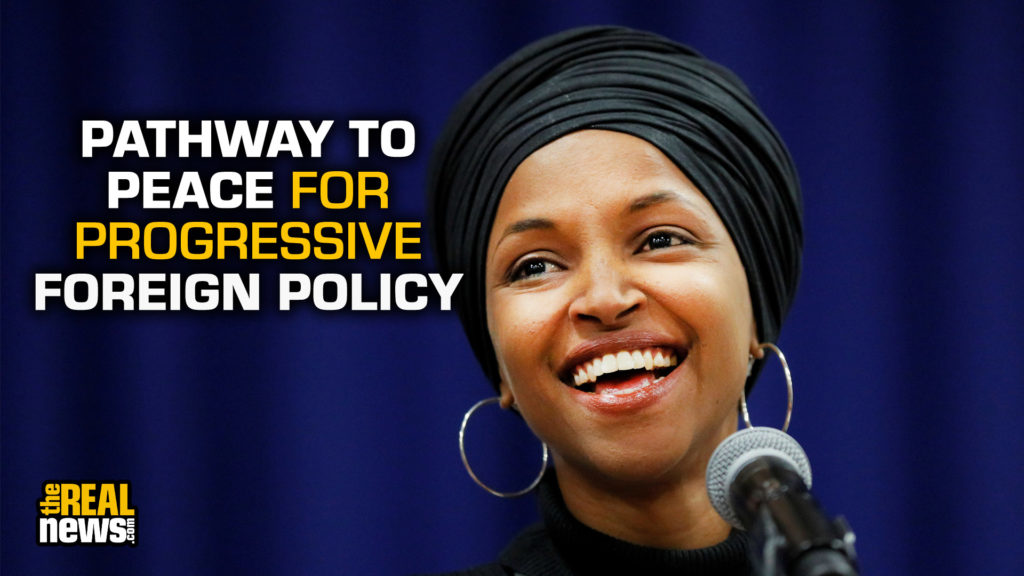 Congresswoman Ilhan Omar of Minnesota introduced a package of seven bills last week, which she calls the Pathway to Peace. This legislation, if it were passed, would mean nothing short of a revolution in the way that U.S. foreign policy is conducted. Last year, Omar already said that she plans to make U.S. foreign policy more ethical.

GREG WILPERT: The package of seven bills would end arm sales to countries that violate human rights, provide foreign aid to youth in developing countries, shift $5 billion from the Pentagon to the state department for a global peace building fund and grant Congress oversight over U.S. economic sanctions. Also, the bills would have the U.S. sign the UN Convention on the Rights of the Child, a global migration agreement, and the Rome Statute on the International Criminal Court.

Joining me now to analyze Representative Ilhan Omar’s proposal is Kate Kizer. She’s the Policy Director at Win Without War, a national grassroots advocacy organization that works to help establish a more progressive foreign policy for the United States. Thanks for joining us today, Kate.

KATE KIZER: Thanks for having me.

GREG WILPERT: The chances that this package of bills would be approved by congress, particularly by the Republican controlled senate, and then not be vetoed by the president, is pretty slim. So what’s the significance of Representative Omar’s Pathway to Peace?

KATE KIZER: It’s a really important marker of what Progressive’s want to see on foreign policy. For a long time there’s been little to no debate within the Democratic Party of how we would actually reform U.S. foreign policy to meet the values that the U.S. says it stands for. So it’s very exciting to see Representative Omar lay down such bold markers of how we would change U.S. engagement with the world, and not only to socialize these ideas amongst her peers in Congress, even if they won’t end up becoming law this year, but also to signal what we would expect to see from a progressive White House in the future.

GREG WILPERT: Now, in an article that you wrote for The American Prospect about the Pathway to Peace, you point out that the United States has historically pushed for a rules-based international system, but you also point out that the U.S. has at the same time considered itself to be an exception to these rules and not bound by them. For example, the U.S. is the only country in the world not to have signed the UN Convention on the Rights of the Child, and one of the few that hasn’t supported the International Criminal Court or the UN compact on migration.

Now, getting the U.S. to abide by these UN conventions would imply a significant shift in U.S. foreign policy. Is there support among the Democratic Party and presidential candidates for such a shift, and if not, how might such support be built?

KATE KIZER: In rhetoric, I think there absolutely is support for these ideas of being an internationalist, of being a multilateralist in foreign policy. The U.S. government says it supports the multilateral system, but as you just mentioned, it’s my analysis that we actually act to undermine it, which weakens that system, and prevents us from actually positively reforming the system to meet the needs of the 21st century.

So it’s been very exciting to see Senator Warren and Senator Sanders on the campaign trail really stake out an internationalist position that supports multilateralism, and it would absolutely require the U.S. to not only join these international conventions that set out the rule of the road, but also to establish more norms and standards that it not only holds itself accountable to but other countries. Without holding ourselves accountable to these standards, we can’t then act for accountability for other countries. Ultimately, that undermines any U.S. power to implement these rules of the road.

GREG WILPERT: Now currently, not only hasn’t the U.S. signed these conventions that we mentioned, but it also flaunts international law when it imposes unilateral economic sanctions on countries such as on Venezuela, Russia, or Iran. That is, according to the UN charter it is illegal for countries to engage in collective punishment. Now, the Pathway to Peace includes a bill that would require Congress to approve of economic sanctions, but it would still mean that sanctions could violate international law actually. I mean wouldn’t a bill that would outlaw all non-UN-approved sanctions be better?

KATE KIZER: I think that the fact that U.S. sanctions has really become a reflexive tool in the toolkit that many policymakers don’t see as a form of warfare, is very problematic. I think Congresswoman Omar recognized this. She’s obviously been an advocate for an end to U.S. blanket sanction regimes that violate international law and cause undue hardship to regular people in sanctioned countries. But I think she’s strategic in that she recognizes that many members of Congress in particular are not ready to just do away with all U.S. sanctions power.

So what she is doing is really staking out what a first step in sanctions reform look like. First Congress must A, have to affirmatively vote to approve any sanctions. In doing so it would force Congress with having to reckon with whether or not sanctions actually can achieve the policy goals that they say they want to achieve, which the academic literature indicates they can’t and don’t. And they would also have to reckon with the humanitarian impact of sanctions, which Congress largely ignores at this point, and it has led to some of the world’s worst humanitarian crises as we’re seeing in Venezuela, and North Korea, and Iran.

GREG WILPERT: Now, while the U.S. sanctions governments it does not like, it actually arms governments that it does like such as Saudi Arabia, and it arms them to the teeth even when they violate human rights or wage war. Now, one of these bills in Omar’s package, the Stop Arming Human Rights Abusers Act, would dramatically change this practice, and require the president to certify whether countries engage in human rights abuses lest they be cut off from U.S. arms.

Now, if this bill were to become law, we can though be fairly certain I would say that a president such as Trump would not rule a country such as Israel or Saudi Arabia to be a violator of human rights. Wouldn’t it be better to have an independent commission make such a judgment on human rights abuses?

KATE KIZER: Actually, the Stop Arming Human Rights Abusers Act would establish an independent human rights commission that’s been modeled off of the international commission for religious freedom. How that works in practice is, there is independent commissioners who evaluate the human rights records and evidence of human rights abuses of a subject country, and they would essentially tier them on whether or not they meet the threshold for a cutoff of assistance.

The nice thing about this bill is, despite the fact that there are human rights protections in current U.S. foreign assistance and arm sales laws, they’re not regularly enforced because they’re so broadly and generally written that they’re difficult to enforce, and the incentive at the state department and the department of defense is to continue sending out weapons and other assistance to countries versus trying to halt assistance.

So this would take those decisions out of the hands of those bureaucracies and instead provide independent analysis to determine whether or not countries are violating the thresholds that Miss Omar’s bill identifies. So, again, it would be a really strong step in the right direction in that it would essentially provide a huge way for civil society to influence whether or not the U.S. is providing security assistance, police officer training, or weapons to a subject country, and create a much more transparent process.

GREG WILPERT: Okay. Well, we’re going to leave it there for now, but we’ll continue to see how this bill fares in Congress. I was speaking to Kate Kizer, Policy Director at Win Without War. Thanks for joining us today Kate.

KATE KIZER: Thanks for having me Greg.

November 20, 2019
Sign Up for Our Newsletter
Help Us Make Real News!