How Has Trump’s Working Class Rhetoric Compared to His Policies? Q&A (Pt 2/6)

Part 2 of Paul Jay and Aaron Mate’s interactive discussion with viewers about the real reasons Trump should be considered a traitor by the American people – From a live recording on August 2nd, 2018

Part 2 of Paul Jay and Aaron Mate’s interactive discussion with viewers about the real reasons Trump should be considered a traitor by the American people – From a live recording on August 2nd, 2018 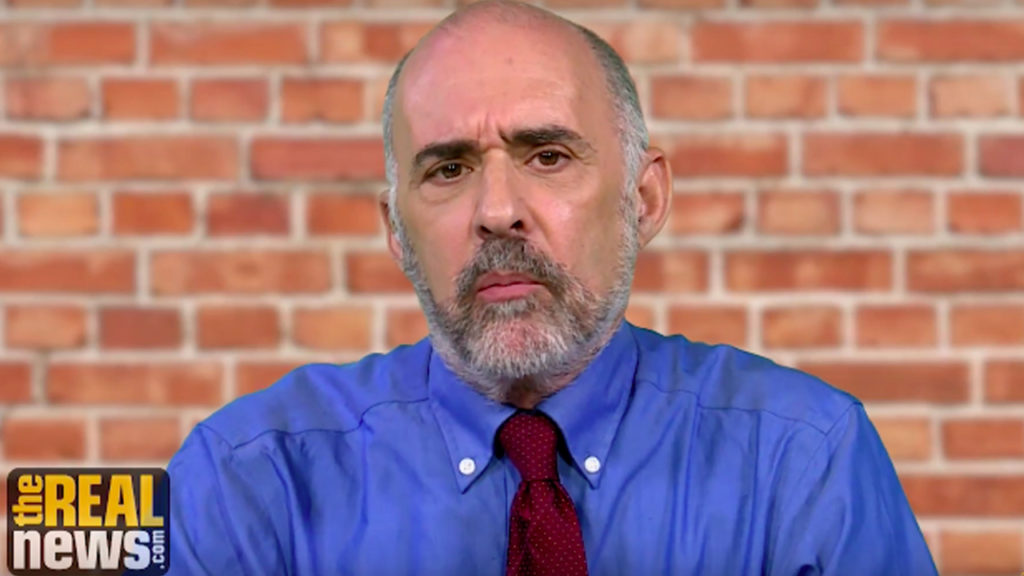 AARON MATE: One of those reasons, Paul, I see as this transition from Trump, in what was obviously a con to everyone who could look at it soberly, on the campaign trail promising to be the champion of the working people, to then coming into Washington and overseeing a radical expansion of the upward transfer of wealth from the poor to the rich. Just this week there was a report that the Trump White House is considering a unilateral tax cut worth about $100 billion. That would, of course, benefit mainly wealthy taxpayers. That was reported in the New York Times. Contrast all this- and this is after the tax cut that was already passed in Congress last year- contrast all of this with what Trump said on the campaign trail. I’m going to go to a clip of him campaigning in Pennsylvania.

DONALD TRUMP: Globalization has made the financial elite who donate to politicians very, very wealthy. I used to be one of them. Hate to say it, but I used to be one. But it’s left millions of our workers with nothing but poverty and heartache. When subsidized foreign steel is dumped into our markets, threatening our factories, the politicians have proven, folks, have proven they do nothing. For years they watched on the sidelines as our jobs vanished and our communities were plunged into Depression-level unemployment.

AARON MATE: So That’s Donald Trump on the campaign trail in 2016. Paul, I’m wondering if you can talk about this game that Trump is playing now. I mean, he still paints himself as a champion of the working class. This week he attacked the Koch brothers, while still noting that he’s made them very rich, and also leaving out the fact that he’s not only embraced many, hired many officials with ties to them. Dozens, actually. But also even adopted their policies that were written by Koch brothers-funded policy groups. So this strange situation that we have, on the one hand Trump continuing to attack people by name and painting himself as against them, while still behind the scenes pursuing their agenda pretty diligently and effectively.

PAUL JAY: Well, of course that’s the other great betrayal of the American people; the lies of the campaign and the reality of the Trump government. Rana Foroohar, I can’t remember the exact statistic, but she writes for The Financial Times. When I interviewed her she had an interesting stat, which was Trump’s cabinet alone has more wealth than I think it is something like a third of the American population. We can go back and check.

But of course he’s a total con man and hypocrite. The, the joke of what he just said about politicians who are bought, and the influence is bought by billionaires. He says, I used to be that. Well, he only means he used to be on the buying side. On the selling side. And maybe it’s the other way around. He used to be on the buying side, now he’s selling the influence. I mean, he wouldn’t be, he wouldn’t be president if it wasn’t for Robert Mercer and Sheldon Adelson, two of the most reactionary billionaires on the planet, who funded his presidency. You know, I keep talking about the Robert Mercer story. It’s still amazing to me how many informed people don’t even know who Robert Mercer is, but used to own Breitbart and brought in Bannon and Kellyanne Conway. So he’s, he’s a total con.

Now, the thing is about his economic message- and this is partly what’s wrong with this focus on the Russiagate stuff. Again, whether everything’s true or not true I have no idea, and I’ve said many times I hardly don’t care. Because the messaging of Trump and the policies of the Trump administration are so destructive. But they do need to be unpacked in terms of their substance. You know, does this kind of immigration lower wages? You know, when I say ‘this kind of immigration,’ I mean people that are here without documentation illegally. Does that lower wages, does it take away American jobs?

And that needs to be unpacked in a serious way, because it’s not enough just to have sentiment that it’s not fair the way undocumented people are being dealt with. It doesn’t deal with the economic argument that Trump makes that is somewhat persuasive. Excuse me, not only Trump. But if one looks at it, just on the face of it, terrorizing the undocumented population, it doesn’t make them run and leave the country. It makes them even more susceptible to work for even lower wages, and to be even more fearful of fighting for rights.

It’s, it’s kind of just A-B-C logic. If one really has the objective of raising wages and and defending jobs, then what you do is you help people legalize. And not only that, you help people unionize. But as long as this workforce is being terrorized, it’s going to depress wages and make this competition worse for American workers that do have legal status, and citizenship, and so on.

As far as the Koch brothers go, I mean, Mike Pence is a Koch brother representative in the administration. He’s clearly closely connected, Vice President Pence, to the Koch brothers. And there’s always been this kind of competition between the Trump cabal and the Kochs. There’s this one story once where I think one of the Koch brothers’ friends were playing golf on a Trump golf course, and Trump actually kicked the person off the course, and David Koch was all angry. But this is secondary fighting that goes on. As you said, on the policy front, with a few exceptions. The Kochs apparently don’t like the trade war going on.

But I would think the Kochs would be extremely happy ratcheting up tensions with Iran, because this morning there’s a report that if the confrontation gets sharp enough where the Americans actually block Iranian oil exports, and then the Iranians, who have threatened their response will be to block the Straits of Hormuz, they’re saying oil may go up to $250 a barrel. And I think the Koch brothers would be rather pleased with that.

Both Parties Honor the Dark Side