How Haiti's Spontaneous Uprising is Connected to Venezuelan Solidarity 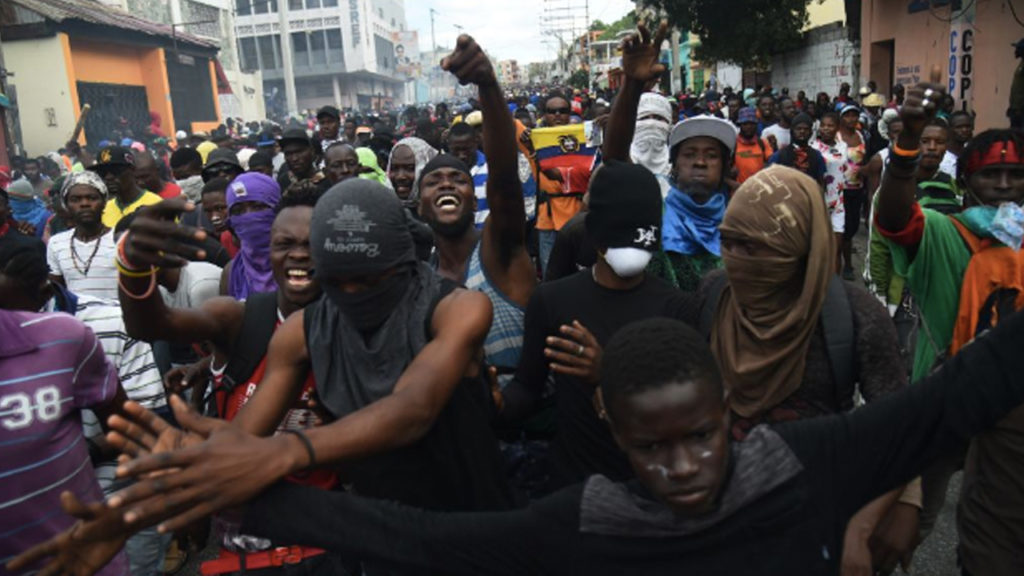 MARC STEINER: Welcome back to our Real News conversation about the revolt going on in Haiti. I’m Marc Steiner. And we’re talking with Kim Ives, who is an editor of Haiti Liberte.

So what I want to explore here in this segment is the role of Petrocaribe, and the money that was sent to Haiti, which involve, obviously, Venezuela, because Petrocaribe is a Venezuelan company, and that relationship Venezuela had with Haiti, which was very progressive. And then the United States pushing the president, Jovenal Moise, to condemn Venezuela and push them out, and say we should push Maduro out, and how this whole connection with Venezuela and Haiti is meeting here. So what is this convoluted story?

KIM IVES: Well, as you know, Marc, most of Latin America, indeed most of the world, Africa and Asia as well, were former colonies. All their wealth was stolen to create the primitive accumulation in Europe and America, most in North America. And so as Eduardo Galiano showed us very clearly, the open veins of Latin America are what really helped grow the empires of the North, which still rule over the South.

So Hugo Chavez had the brilliant idea of saying well we are blessed with this tremendous amount of oil, the world’s largest reserves. We’re going to share it with our neighbors, at least in the Caribbean, and provide them the capital so that they can develop and begin to pry themselves out of the grip of Washington, and Paris, and Ottawa, particularly in the case of Haiti, and have more South-South collaboration, cooperation, trade, et cetera. So that’s how 17 countries benefited from this Petrocaribe deal, under which Venezuela would give them cheap oil on great credit terms. In the case of Haiti, as you mentioned, it was 25 years to pay it back at 1 percent interest. They only had to pay 60 percent up front, and 40 percent went into this Petrocaribe fund, which they could use to build roads, or schools, or hospitals, or any kind of social programs.

And so, really, this money, when Rene Preval was elected and came into power in 2006, that was the first thing he did. On the day of his inauguration he went and sat down with Vincente Rangle, the vice president of Venezuela, and signed the Petrocaribe deal. Again, as Haiti Liberte detailed in our series of articles from WikiLeaks, from WikiLeaks cables that we were provided by WikiLeaks back in 2011, the U.S. fought this deal tooth and nail, and it took Rene Preval and his crew two years to, in fact, get the whole deal in place, and get the Petrocaribe fund all set up.

But essentially, the U.S. was going to punish him for this. And what they did was after the earthquake they had this election, which they intervened in. Put in this ribald singer, a guy called Michel Martelly, who was a crook. People knew he was a crook. His father-in-law was one of Haiti’s biggest drug dealers. And a lot of his entourage ended up being involved in all kinds of criminal activities, and even arrested for it, even under his regime. And so basically all this Petrocaribe money was being sucked out by this group, or I could say diverted.

And so really that’s what we’re seeing today, is the people’s anger that here was this tremendous gesture of solidarity from the Venezuelans in an attempt to set an example for and to create and to replace some of the stolen capital that these neocolonies didn’t have by the Venezuelans. And so the Venezuelans gave Petrocaribe not just to Haiti, but also to the Dominican Republic. But the Dominican Republic has nowhere near Haiti’s revolutionary, I could say, signature in history. The Haitians have always been at the forefront since their first revolution in 1804, which was the first independent nation of Latin America. It was Haiti that gave Bolivar the guns and boats and printing presses and soldiers to wage his war. And that’s why Hugo Chavez said we owe a debt to the Haitian people for what they’ve done in the past, so our solidarity today is in tribute or in honor of the solidarity they gave us 200 years ago.

MARC STEINER: So where do you see this revolt going? At the top of our conversation in the first segment I talked about how many people are saying this could be another revolution, as it was 33 years ago. So what’s your sense of what is happening now, and where this could take Haiti?

But I think what will happen is right now the opposition is split enough and weak enough that the U.S. Embassy is going to be able to cobble together some kind of group that will take power. Now, under the Constitution it’s supposed to be the Supreme Court member, generally the head of the Supreme Court. That’s what happened in 1990, when they put in a woman called Pascal Trujillo, who had the election which brought Aristide to power. They probably won’t make that mistake again, because they don’t want another Aristide.

The other possibility–there’s kind of two Constitutions. Nobody really knows which one is the ruling one. Or the other Constitution says that it’s the president of the Senate who’s supposed to take over.

MARC STEINER: The question I want to get to is what where do you think this revolt in the streets is going to take Haiti. What are people saying about–yeah.

KIM IVES: No, I’m getting–I’m getting to there. So the president of the Senate might take over. And the third possibility is there’s a new prime minister, because the first one, after they tried to hike fuel prices in July, Jovenel had to sacrifice his first prime minister, a guy called Jack Guy Lafontant, who basically was the sacrificial lamb then. And so he had him replaced by a guy called Jean-Henry Ceant, who is sort of the consummate opportunist. The people don’t believe in him anymore. He had at one time been slightly allied with Aristide.

But right now what we may end up seeing is some kind of provisional government, as we saw 33 years ago, where they set up what was called the CNG, the Conseil National de Gouvernement, the National Council of Government, which had, you know, a couple of generals on it, a couple of politicians, a lawyer, and et cetera, et cetera. That probably won’t last long if they were to do that.

So I think basically where we’re heading towards is a period of instability. It may go on for five years, as it did after Jean-Claude’s departure. Or it may go on somewhat shorter or longer. But the point is I think the Haitian left, the Haitian progressive organizations, are really sitting down now and are trying to build an organization which can really capture and lead this. You know, I can say, try to articulate, sharpen, and set a strategy. Because right now it’s a little bit like waves hitting against rocks. The people are mobilized. They’re mad. They are burning, and you know, going in the streets. But there isn’t a real strategy, as it were.

MARC STEINER: We’ve been talking with Kim Ives, who is editor of Haiti Liberte. And, Kim, thank you so much for being with us. We look forward to covering this in greater depth as this progresses, with you and others. Thanks so much for your time. Good luck with all your work.

KIM IVES: Thank you very much.

MARC STEINER: And I’m Marc Steiner here with The Real News Network. Thanks for joining us. Take care.

Kim Ives lives in Brooklyn and is an editor at Haiti Liberte, Haiti’s largest newsweekly.