The war in Yemen could end, if U.S. and United Arab Emirates' support for Saudi Arabia's war in Yemen is truly over. However, the House NDAA bill still faces a major hurdle in the Senate. If those who want US military involvement to end pressure Congress, it can be done, says CodePink's Medea Benjamin

The war in Yemen could end, if U.S. and United Arab Emirates' support for Saudi Arabia's war in Yemen is truly over. However, the House NDAA bill still faces a major hurdle in the Senate. If those who want US military involvement to end pressure Congress, it can be done, says CodePink's Medea Benjamin 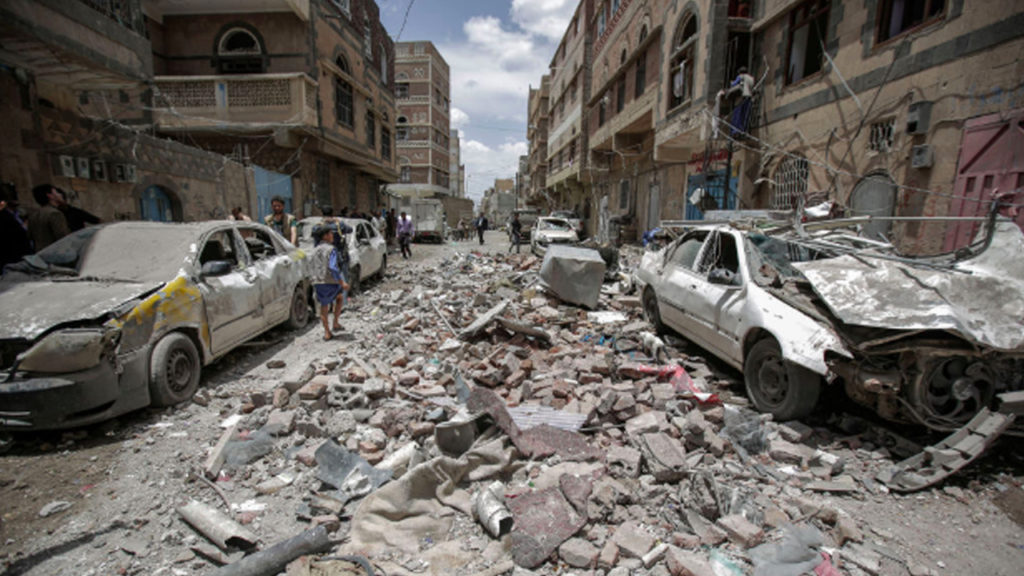 For the first time in four years, it looks like the war in Yemen could actually come to an end. That is, two important developments with regard to the war in Yemen happened on Thursday and on Friday. First, the United Arab Emirates, which is a crucial coalition partner with Saudi Arabia in this war, announced that it is withdrawing almost all of its ground forces from Yemen. Then, on Thursday and on Friday, the US House of Representatives passed several important amendments that will affect US military involvement in the Middle East. For example, they voted 236 to 193 on Thursday to prohibit the Trump administration from using funds to support the Saudi-led military operations in Yemen with munitions or intelligence. This vote is an amendment to the 2020 National Defense Authorization Act, or NDAA. This means that if the amendment also passes the Senate version, it would make it very difficult for Trump to veto as he did with an earlier bipartisan bill to stop US support for the war in Yemen, which is a war that has killed tens of thousands and is threatening millions with starvation, and that the UN has called the “world’s worst humanitarian crisis.”

Joining me now to discuss the latest developments with regard to the war in Yemen is Medea Benjamin. Medea is co-founder of the peace group CODEPINK, and author of the book Kingdom of the Unjust: Behind the US-Saudi Connection. Thanks for joining us today, Medea.

MEDEA BENJAMIN Good to be with you, Greg.

GREG WILPERT So let’s start with the announced withdrawal of the United Arab Emirates, or UAE, from Yemen. Why do you think this is happening now, and what does this mean for the war in Yemen?

MEDEA BENJAMIN There has been a difference in strategy between the Saudis and the Emirates for quite a while now with the Emirates supporting the groups in the south, the Saudis supporting the groups in the north, the Saudis worried that the Emirates were supporting a secessionist group that might want to break away. But then more recently, with the conflict between the US and Iran heating up, the Emirates did not want to be a target of Iran and thought that pulling out would make them less of a target. And then there’s also just the issue of the reputation of the Saudis being so tarnished. Unfortunately, not because of all the deaths that they have caused in Yemen, but more because of the killing of Khashoggi. In any case, the Emiratis understand that the Saudis are not a good partner at this point. And of course, there has been ongoing criticism by the human rights community, by the humanitarian community, by the United Nations, and now by Congress of all of the deaths that have been caused by the Saudi-UAE coalition that has been fighting the Houthis. So I think all of this together has been enough to push the Emirates to try to cut their losses.

GREG WILPERT Now, turning to Congress, there have been a number of bipartisan attempts so far to halt the US support for the war in Yemen. Perhaps the most important happened last April when Congress passed a resolution to invoke the War Powers Act, prohibiting the US support for the war in Yemen. But Trump vetoed that resolution back then, and there weren’t enough votes to override the veto. Now the House has to pass the NDAA, which includes several amendments and one of them would block funds for US support for the war. Do you think there will be enough support in the Senate to pass the NDAA with these amendments and ultimately cut off funds for the war?

MEDEA BENJAMIN Well, that’s the big question and unfortunately, the Senate is in control of Republicans. And there are some Republicans like Mike Lee and Rand Paul that have been questioning the US support for the Saudis, and been important in bringing over some other Republicans to oppose the continued US support, but there is a lot of pressure from the administration to try to bring the Republicans in line so that it wouldn’t pass in the Senate. And certainly, there are a lot of worries that while this is an important signal from the House side, that it’s not going to be in the final NDAA. We will be pushing everyone in the Senate to make that be part of the NDAA, but it is not clear. And as you said, there are other positive things that have been passed in the Senate that have somewhat made the NDAA a little better, but let’s also recognize that even in the House side it’s $733 billion in this National Defense Authorization Act, which is an enormous amount of money, a way oversized budget. So while we are happy that this passed in the House, we still want people to understand that there must be a much bigger fight in years to come to really try to turn around the constant increases in the Pentagon budget. And on the Senate side, they’re going for $750, so it might even be more in the end than the $733 billion.

GREG WILPERT Right. Now, as I mentioned in the beginning, there’s several other interesting amendments that have been included in this NDAA. One of them would be to require Trump to get Congress’s approval before authorizing military force against Iran. And then, they also voted for an amendment that would cut off all sales of surface-to-air munitions to Saudi Arabia and the United Arab Emirates for the next year. And then finally, there was another one that would also phase out the Authorization to Use Military Force that was passed after the 2001 September 11th attacks. So how do you see the chances of these amendments passing Congress, and how significant do you consider all of these efforts to halt US military involvement in the Middle East? Does it mean, in other words, that Congress is finally getting weary of these wars and will put an end to them?

MEDEA BENJAMIN Well, it absolutely sends a very strong signal to the White House and to our allies overseas and certainly to the Saudis, that the American people are tired of these wars. And no matter what happens on the Senate side, the message has been sent. On the Democratic side, almost all of the Democrats except for five when it came to cutting off support for the Saudis’ war in Yemen, and in the case of Iran, all but seven Democrats voted the right way, so that is almost total unity. And as I mentioned, there have been a number of Republicans who’ve split from their party. We have to make that happen in the Senate as well. But I think we should see this as a very positive development that so many members of the Congress are sending the same message that they sent to Trump the last time when Trump overrode the veto— that Congress wants to punish the Saudis, that Congress wants to see an end to the war in Yemen, and that Congress also does not want to see an unauthorized war in Iran. So while we’re not happy about all the money that’s authorized in this act, we are very happy that there has been such a strong voice coming out of the Congress today in favor of ending these wars.

GREG WILPERT Now finally, what would you say that ordinary folks can do, citizens who are concerned about these issues, in terms of trying to make sure that this also passes the Senate with these important amendments?

MEDEA BENJAMIN Well first we think it’s important to let those Democrats who voted the wrong way know that we are ashamed of them and their vote. We at CODEPINK visited their offices today, and they have been getting calls, and they should be getting more because it’s an important message that the Democrats should not be giving Trump a green light for a war in Iran, or a green light to keep selling and supporting the Saudi war in Yemen. And we have listed those on the CODEPINK Facebook page, if anybody wants to go there. And then of course, we should be turning to the Senate and pushing for all of these things to be passing as the Senate and the conference comes to determine which of these will be in the final bill.

GREG WILPERT Okay. Well, we’re going to leave it there for now, but we’ll certainly keep an eye on it as things develop in Congress. I was speaking to Medea Benjamin, co-founder of the peace group CODEPINK. Thanks again, Medea, for having joined us today.

MEDEA BENJAMIN Thank you for having me on.