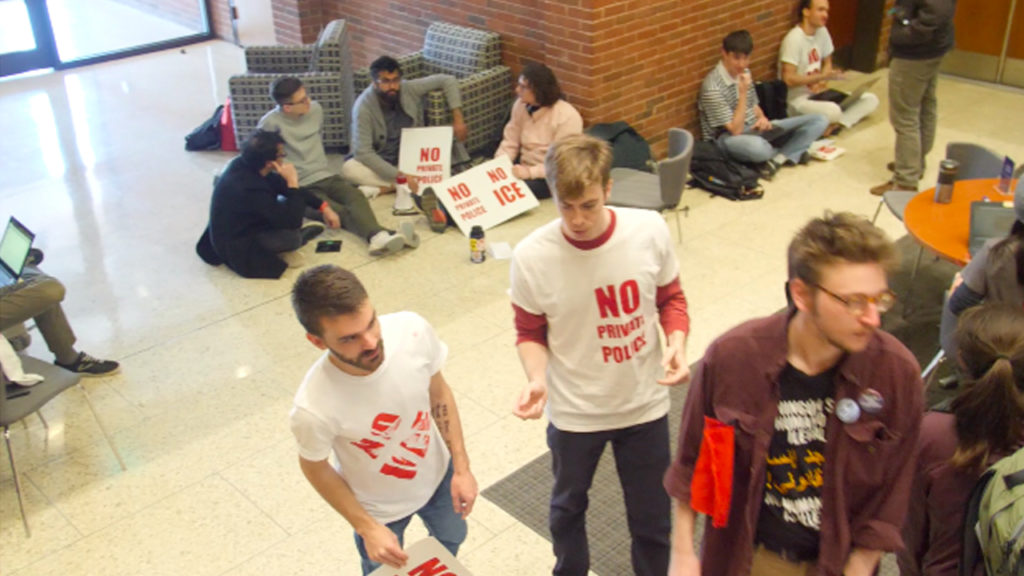 CHISOM OKEREKE: And I’m here on behalf of the Black Student Union to make sure that Hopkins’s administration knows that we do not support the legislation that was just passed that would allow them to establish their own private police force, especially since students and students of color on this campus already don’t feel safe with the already present law enforcement and abuse on campus. We want to make sure that we know that we are adamantly against adding weapons and dangerous arms to those–to those hands.

JAISAL NOOR: I’m Jaisal Noor for The Real News Network reporting from Johns Hopkins University, where some three dozen students have launched an occupation, a sit-in, of a campus building to oppose Hopkins’s contracts with ICE, Immigration and Customs Enforcement, and a bill that’s currently on the governor’s desk which would grant Hopkins an armed private police force. We reached out to Hopkins for a statement and it said in part they remain steadfast in their commitment to supporting international and DACA students. They say they’ve been unequivocal in their public statements concerning the consequences of recent immigration policies. Concerning the private police force bill, Hopkins says the legislation puts in place measures to ensure public accountability, public transparency, and public input. They’ll work together to build a model of constitutional community policing with community and students.

But students present here at this occupation have a different message.

PETER WECK: This time around we’re actually going to be sitting in here so that they will have no choice but to continue to listen and talk with us until our demands are met. And those demands are for an end to all contracts with ICE immediately, and ends to all plans to form a private armed JHU police force.

JAISAL NOOR: Hopkins sent us a statement saying that this bill, which is soon to be law, most likely, has lots of accountability as far as the community campus, the school. And that they’re going to work–as soon as the bill comes into effect on July 1, they’re going to work to ensure that that accountability continues. What’s your response to that?

CHISOM OKEREKE: I would say that as far as programs and initiatives that are already on this campus that are supposed to be there to ensure that accountability is being placed on the proper people, there’s just no precedence for this sort of transparency and accountability that they are ensuring would be in this private police force. And I think that if they wanted to make sure that people were confident in this accountability and transparency that they’re promising, they would have taken the time to make those necessary changes on campus and in the community so that we can know that that will be translated into the larger scale. We just haven’t seen it. There’s no precedence for it. And so I would like to believe their word, but it’s kind of hard with what we’ve already seen.

JAISAL NOOR: So we know that different groups bought tens of thousands of copies of books from Mayor Catherine Pugh to essentially curry favor, is what’s alleged. The state’s investigating that. But Johns Hopkins officials gave $16,000 in a single day to Catherine Pugh before she introduced this bill. Do you think that should also raise red flags?

MARIOS FALARIS: So at every stage of the way Johns Hopkins has not used accountable and democratic processes to come up with these decisions. And that’s how we’ve ended up with these militarized actions, these militarized responses. So when it comes to the ICE contracts and the point of academic freedom, I mean, the whole point is that this was against medical ethics, right, of doing no harm, of all of these things. This is precisely what, you know, Johns Hopkins medical students, public health students all learn in their first weeks when they’re here. That in order to support an agency which actively commits violence, which separates families, which is inhumane, this is completely against all medical ethics. So this is where the line is drawn.

JAISAL NOOR: At 6:00 today students from across the campus and community groups will be rallying near the Hopkins campus to oppose these policies. Stay tuned for more at TheRealNews.com.