Hong Kong residents have taken to the streets to protest against the growing influence of mainland China over the city. But, the protests are falling on deaf ears, says Prof. Sean Starrs

Hong Kong residents have taken to the streets to protest against the growing influence of mainland China over the city. But, the protests are falling on deaf ears, says Prof. Sean Starrs 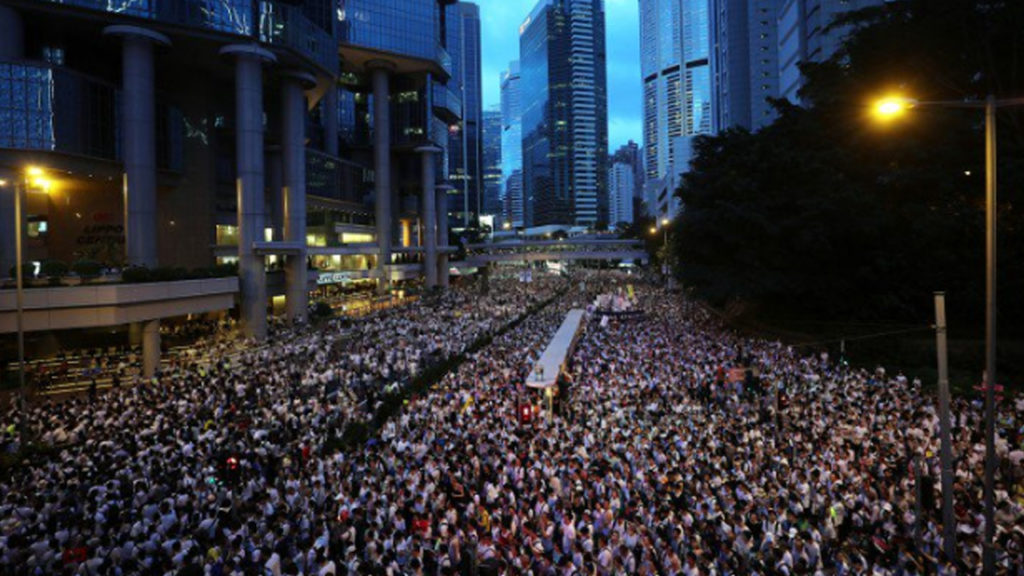 Just a week after commemorating June 4, 1989, the massacre on Tiananmen Square, over a million people demonstrated in Hong Kong this weekend to protest new legislation which enables the extradition of suspects to China. The protesters are concerned that the extraditions would spell the end of Hong Kong’s autonomy, putting it firmly in the grip of the Chinese government and making freedom of speech and freedom of expression impossible. Now, Chinese authorities claim that the law is only intended to apprehend fugitives who flee to Hong Kong from the mainland. Now, Hong Kong used to be a British colony and was leased from China for 99 years, and then returned to China in 1997. In the 22 years since there has been a delicate balance between Hong Kong’s autonomy and the power of the Chinese Communist Party. Now, the legislation, however, threatens to break the status quo and tip the balance in favor of Chinese dominance over the island. The chief executive of Hong Kong, Carrie Lam, remains committed to passing the legislation despite the protests.

SEAN STARRS: Thank you for having me.

SHARMINI PERIES: Sean, let’s start with what these over a million people that demonstrated in Hong Kong over the weekend, what are they really protesting?

SEAN STARRS: Well, so I mean, they’re protesting erosion of their basic freedom of speech, freedom of assembly, and so on, as you mention. But you know, the immediate rationale for this extradition law is in reference to Taiwan. So I mean, Hong Kong has extradition agreements with about 20 countries, but not with Taiwan or mainland China. So a Hong Konger, Tong Kai Chan, admitted to killing his girlfriend, his pregnant girlfriend, in Taiwan, and then he escaped back to Hong Kong. And so the immediate rationale for this bill is to allow Taiwan to extradite Chan. But actually Taiwan has said that they don’t want to extradite Chan, and president Tsai Ing Wen of Taiwan yesterday, Monday, said that this extradition bill represent means that we should not have one country, two systems in Taiwan. So they’re using this actually to harden their pro-independence sentiments in Taiwan.

So obviously this is about Beijing’s increasing encroachment on Hong Kong’s basic freedoms, which is supposed to be enshrined in the the Basic Law until 2047.

SHARMINI PERIES: Right. Now, let’s talk about the Chief Executive Carrie Lam, here. It appears that she is bowing to Beijing over the million people that protested against such a grip that Beijing has on Hong Kong. And give us a sense of what that dynamic is like. And obviously she doesn’t seem to care so much about the public opinion right now. So what does that mean.

SEAN STARRS: Yeah. Well, I mean, she’s held accountable to Beijing and the Chinese Communist Party, of course, not to the people of Hong Kong. I mean, Hong Kong is not a liberal democracy in that sense. So it’s actually enshrined in the Basic Law where she’s held accountable by Beijing. So the difference with the protests in 2003 is quite striking. So half a million people protested on the streets in 2003 against a draconian National Security Law which would make illegal sedition, treason, subversion of the state in China. And so half a million people protested in 2003 and that proposal was tabled. So they were successful.

So now we have a million people marching on the streets, and it’s fallen on deaf ears, on Carrie Lam, because of course she’s heavily pressured. Of course, she claims that she’s not. But she’s clearly very much pressured by Xi Jinping because he has increased authoritarianism both in the mainland and increasingly in Hong Kong since 2014, since the Umbrella Movement protests.

SEAN STARRS: I guess nobody knows. I mean, Carrie Lam at the moment is trying to ignore it or trying to dismiss it. Beijing is already saying, of course, what they always say, that this is due to foreign influence. I mean, they claim the whole Umbrella Movement was because of the CIA and the U.S. State Department, and so on. So I mean, we’ll just have to see. I mean, there’s–you know, it’s not, it’s not any big bang repression. It’s death by a thousand cuts, right? So a number of Hong Kong political parties have been banned in the past couple of years. Germany granted asylum to Hong Kongers that were founded the Hong Kong Indigenous Party, which is the independence movement in Hong Kong. So there’s increasing encroachments on Hong Kong’s basic freedoms. So it’s not any one big thing. And so we really don’t know.

I mean, so there’ll be a second reading of the law tomorrow, Wednesday, Hong Kong time. And I’ve read that some small businesses and unions are calling for a general strike on Wednesday. So we’ll see how that goes. People are also calling for more protests on Wednesday. So I mean, you know, nobody knows what will happen. But the–I mean, the main thing, you know, is there’s 43 pro-Beijing legislators in the Legislative Council out of 70 seats. So I mean, this will likely pass by July, which is what Beijing wants. But in terms of governance, we’ll see how much the Hong Kong people will continue to protest.

SHARMINI PERIES: All right, Sean, we’ll keep an eye on it, as well. And if there’s a general strike we’ll certainly have you back to talk about it. Thank you so much for joining us today.