Honduran President Juan Orlando Hernandez has sent the military into the streets to repress protests. At least 3 have been killed recently. Professor Adrienne Pine talks about how these events relate to the 2009 coup

Honduran President Juan Orlando Hernandez has sent the military into the streets to repress protests. At least 3 have been killed recently. Professor Adrienne Pine talks about how these events relate to the 2009 coup 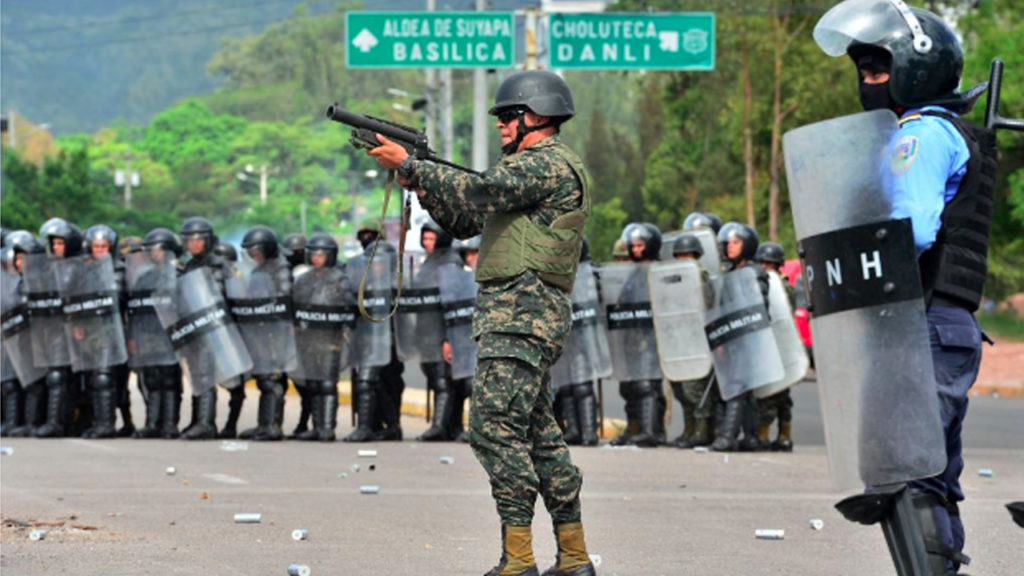 GREG WILPERT It’s The Real News Network and I’m Greg Wilpert in Baltimore. Just when the people of Honduras are marking the 10-year anniversary of the coup d’état that forced then President Manuel Zelaya from office, Honduras is in turmoil. Protests have been taking place almost constantly for the past two months against government decrees to impose austerity and cutbacks in the education sector and in healthcare. Increasingly, the government has brought out the country’s military to repress protesters because the police have often joined these protests as well. The military is known to use live ammunition in its repression. Last week, three people were killed and several more were injured over the past weekend. The government of conservative President Juan Orlando Hernandez is considered to be illegitimate by most Hondurans given that his 2017 election is largely believed to have been fraudulent. More and more sectors of Honduran society are thus now calling for his resignation. Joining me now to discuss the current situation in Honduras is Adrienne Pine. She’s an Associate Professor of Medical Anthropology at American University and has worked in Honduras, Mexico, Korea, the United States, Egypt and Cuba. Thanks for joining us again, Adrienne.

ADRIENNE PINE Thanks for having me, Greg.

GREG WILPERT So let’s start with the current wave of protests. What exactly is driving them, what are the demands, and how has the government reacted to them?

ADRIENNE PINE Well as you noted, Greg, there are a series of privatization reforms that have been promoted by the government at the behest of the IMF, and of course the United States, which would functionally destroy the education and healthcare sectors– what’s left of them after a decade of neoliberal devastation following the coup. Teachers and healthcare workers have led this most recent wave of protests calling for people to come out on the street, which they have done en masse demanding that these reforms not take place because they would imply basically the firing of massive numbers of teachers, doctors, nurses, and would leave students and patients without any recourse, without security, without safety, without education. And so, the protests, you know, they started two months ago. They’ve been repressed tremendously.

There have been a number of people who have been murdered by police, and military police and military, shooting directly into crowds of protesters. The most recent to be killed, I believe, was a young man named Eblin Noel Corea Maradiaga in La Paz. He was 17-years-old, shot at directly by the state security forces. Just last night at the university which has been one of the greatest, sort of, hubs of resistance at the National University headquarters’ central campus in Tegucigalpa, the military police entered into the university, which is supposedly an autonomous university, shot into a crowd, directly hit eight students, rather injured eight students, two of whom were severely injured, and, you know, threw a slew of teargas canisters, just teargassed the heck out of the university. And that’s, you know–So the university in response has shut down until further notice because it’s not safe. So the state of affairs in Honduras really, right now– Honduras is exploding. Thank goodness you’re covering it because we’re not hearing anything about it in the US media.

GREG WILPERT Now, as I mentioned, all this is happening right around the 10-year anniversary of the June 28, 2009 coup against President Manuel Zelaya. Tell us about how that coup and the current protests are connected.

ADRIENNE PINE They’re inseparable, really. The coup was, I would say, the first in a series of a new style of coup that’s being carried out with US support in Latin America. They’re, sort of, legislatively-justified, “constitutional coups,” which of course they’re not. There’s no legality about them, but, you know, followed by the Honduras coup, using the same model, there was a coup in Paraguay, and then of course the legislative coup in Brazil that ousted Dilma Rousseff, and now the attempted coup in Venezuela, are all following a similar model and they’re neoliberal coups. They’re coups that are carried out so that a small, very right-wing elite is able to circumvent any notion of social goods so that they can amass the country’s wealth and, you know, just exercise extractive capitalism for their own benefit. These people are part of a Pan-American fascist right– that in Pan-American, I mean of course the United States as well, but they’re very connected.

And so basically, the coup against Zelaya took place because he had enacted really minimal reforms to protect the common good. He had increased pensions, he had increased access to education for students, he had increased the minimum wage in Honduras, and then what he did that really ticked people off in the Honduran oligarchy was that he responded to demands that there be a non-binding referendum– a non-binding poll rather– about whether or not there should be a referendum, about whether or not there should be a constituent assembly held to rewrite the constitution to make it more democratic. So the idea that there could be an actual democracy in Honduras was too much of a threat for the Honduran elite, and that is why they ousted him on June 28, 2009, which was the same day that that poll was being held. The fear of the Honduran elite is that if there had been an actual democratic constitution written, because the current Honduran constitution was written during a dictatorship and really concentrates power, but if there had been actual democracy in Honduras, that would really hinder their ability to further concentrate wealth in their own hands.

Following the coup, all of the steps that the coup mongers who have remained in power since have taken, have been toward the privatization of public goods, the privatization of roads, the privatization of healthcare, the privatization of education, but also the wholesale selloff of Honduran lands– of communal waterways, collectively held lands, of Indigenous lands, of Afro-Indigenous lands, of campesino or peasant lands. And this has benefited no one in Honduras. It’s meant ecological devastation and it’s meant the destruction of the healthcare and education sectors. And so, people are really, really ready to fight for what’s left of those sectors and to fight. Ultimately, what people are demanding on the streets is the ouster of Juan Orlando Hernandez, the current president who as you noted is unelected, really represents, sort of, the pinnacle of the coup in being a neoliberal fascist dictator who jails his opponents– and jails and murders his opponents– who is being investigated by the DEA for cocaine trafficking, and his brother, of course, was arrested last November as a drug-trafficking kingpin.

You know, what we’ve seen is the coup made all this possible. The coup put these people in power. The coup stole the wealth of Honduras from Hondurans. You know, it’s not like it was an equitable country to start out with, but now people are living in utter devastation and terror and fear. The coup is behind why Hondurans are leaving, why there’s this mass exodus going to the US border, despite the fact that people know well that they are headed for concentration camps when they get there. They know the risks they face, and things are so bad in Honduras, thanks to the US-supported coup, that they’re willing to take that terrible risk.

GREG WILPERT So just touching on that last point that you just made, one of the key elements in all of this has been the role of the United States. Now formally, President Obama claimed to be opposed to the coup in 2009, but his Secretary of State, Hillary Clinton, at the time admitted in her memoirs to having supported it. Now, what is the role that the United States is playing currently in Honduras?

ADRIENNE PINE The United States continues to play a nefarious role in Honduras, fully supporting Juan Orlando Hernandez, the dictator. The Chargé d’Affaires, Heidi Fulton, has done her utmost to provide him support at every step– providing military support to the military that operates death squads, providing police support, trotting Juan Orlando Hernandez out like a puppy at every event that she can. Hondurans really laugh at this because they, sort of, recognize that whoever is in power at the embassy is really, ultimately the real power in Honduras, and there’s a lot of anger about that. She in fact just announced on Twitter yesterday that she would be leaving the post. You know, the responses by and large were, you know, good riddance; stop harming our country. And, you know, of course we see the current administration has been no better than the Obama administration in terms of its basically xenophobic policies and imperialist policies in supporting the successor to the government.

GREG WILPERT Now, with more and more sectors of Honduran society– including the church, some business sectors, and of course the public employees and students– are all opposed to Juan Orlando Hernandez. How do you see his chances of remaining in office much longer?

ADRIENNE PINE You know, it’s an interesting question to speculate on. I mean, certainly more than at any other point the, sort of, sense on the ground I would say is that he is on his way out. There have been other moments when people have felt like that during 2015 and 2017 after he stole the elections, but it certainly feels more like it’s got more momentum now. What I would also say is that the fact that the DEA chose this moment to release the memo, showing that he has been under investigation since– I can’t remember if it’s 2013 or 2015– I think, 2013 for drug trafficking is curious because they’ve had that information all along and only chose to release it now. It may signal a stepping back on the part of various sectors of the US government in terms of their support, but it’s really hard to say.

GREG WILPERT Okay. Well we’re going to leave it there for now, but I’m sure we’re going to come back to you soon, especially since you’re heading to Honduras. I was speaking to Adrienne Pine, Associate Professor of Medical Anthropology at American University. Thanks again, Adrienne, for having joined us today.

ADRIENNE PINE Thanks for having me, Greg.

Adrienne Pine is an Associate Professor of Anthropology at American University in Washington DC, who has studied and written about Honduras for over two decades. She joins us from Oakland California, where she is collaborating with National Nurses United while on sabbatical from AU.