Human rights experts from Canada, the U.K. and the U.S. were forced to flee a protest against the radically neoliberal policies of Juan Orlando Hernandez. Dimitri Lascaris reports from Honduras

Human rights experts from Canada, the U.K. and the U.S. were forced to flee a protest against the radically neoliberal policies of Juan Orlando Hernandez. Dimitri Lascaris reports from Honduras 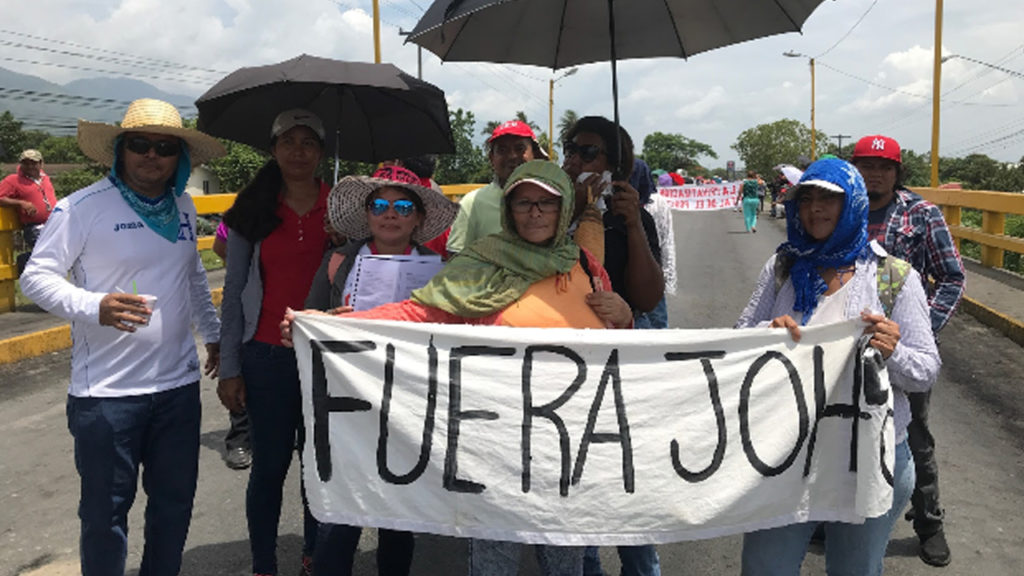 DIMITRI LASCARIS: This is Dimitri Lascaris reporting for The Real News Network from Honduras.

I’ve come to Honduras with a delegation of university academics from Canada, the United Kingdom, and the United States. The delegation has been joined by Pedro Cabezas of the Central American Alliance Against Mining. This delegation is on a human rights fact finding mission.

This human rights delegation has arrived in Honduras at a time of heightened political tension and mass unrest. Two weeks ago, protesters set fire to the door of the United States embassy in Honduras amid ongoing demonstrations against the president of the country, Juan Orlando Hernandez. Hernandez is often referred to by Hondurans by his initials, JOH, or in Spanish, JOH. JOH leads the radically neoliberal National Party of Honduras. In 2009, several years before his rise to power, a coup d’etat removed from power the center-left president Manuel Zelaya. Elected as a libera, Zelaya had shifted his presidency to the left. Approximately one year prior to the coup, Zelaya forged an alliance with Hugo Chavez’s Bolivarian Alliance for People of Our America. The U.N. General Assembly, the Organization of American States, and European countries all denounced the coup and called for the restoration of Zelaya.

Although the then-President of the United States Barack Obama acknowledged Zelaya’s ouster to have been a coup, his Secretary of State Hillary Clinton secretly supported the coup, and did so on the advice of John Negroponte, the Reagan-era ambassador to Honduras who was implicated in the Iran-Contra affair.

JOH first became the president of Honduras in January 2014, at which time he vowed to be “faithful to the Republic, its constitution, and the laws.” In 2017, however, he sought re-election despite a constitutional prohibition against a second presidential term. In the 2017 election, his principal challenger was Salvador Nasrallah, an ex-sportscaster who had founded an anti-corruption party. On the day before the 2017 election, the Economist published evidence of an apparent plan by JOH’s party to commit electoral fraud. The next day, the election results came in irregular waves. With 60 percent of the votes counted, the polls showed a significant lead for Nasrallah. Then the electronic voting system went off the air for 36 hours. When the system came back up, JOH was winning. He was ultimately proclaimed victor by a razor thin margin.

International observers soon identified strong indications of electoral fraud. Large protests followed. Honduran security forces brutally suppress them. Human rights organizations counted more than 30 people killed by security forces, at least four of whom were under the age of 18. The Trump administration nonetheless recognized the election as legitimate, and did so immediately, despite compelling evidence of fraud. The Canadian government of Justin Trudeau soon followed Trump’s lead.

Since the 2009 coup d’etat, poverty in Honduras has soared. In 2010, 50 percent of the population were living below the poverty line. Now nearly 70 percent of the population live in poverty. Since JOH assumed power, his government has pursued a radical neoliberal plan that is vehemently opposed by a broad swath of the population. Government spending on health care and education has plummeted, while defense spending has increased. Government spending on education and culture has dropped from 32.9 percent of the central government budget to 19.9 percent over the past decade. In addition, there are now widespread shortages of medicines, staff beds, cribs, and equipment in hospitals. About 40 percent of emergency rooms in Honduras have inadequate medical cover, according to the National Commission for Human Rights. Less than 10 percent of this year’s central government budget is allocated to health, compared with 14.3 percent in 2010.

In 2015 it was revealed that at least $350 million was stolen from the state-run health insurance system IHSS, some of which ended up in Juan Orlando Hernandez’s 2013 election campaign coffers. In addition, American prosecutors recently unsealed court documents from 2015 which name JOH as a target of a major investigation into large-scale drug trafficking and money laundering activities. Those court documents also named several close confidantes of JOH, including his deceased sister Hilda Hernandez, and the Security Minister General Julian Pacheco. The president’s younger brother and former Congressman Tony Hernandez was arrested in the United States last November and charged with conspiring to traffic tons of cocaine stamped with his initials.

Despite the scandal, corruption, and socioeconomic disaster that have engulfed JOH’s regime, he has managed to maintain his grip on power with Western government support, and by brutally repressing the resistance to his illegitimate rule. One of the main tactics now used by opponents of the regime is to blockade important roads and highways across the country. On June 12, while travelling by vehicle from Tegucigalpa, the capital of Honduras, to the Atlantic coast, we encountered two such blockades. We departed the capital after meeting with representatives of the Honduran government, including the Vice Minister of the Environment Carlos Pineda [vasquel].

The first blockade we encountered lay on a highway connecting the capital to San Pedro Sula, the second largest city in Honduras. At the first blockade some passengers in the blocked vehicles chanted “Out JOH.” We encountered the second blockade a short while later on the outskirts of the city of El Progreso. Our driver Mattia Santiago got our six-member delegation as close to the El Progreso blockade as possible. We then exited our minivan and began walking toward the blockade. I was the first member of the delegation to arrive at the blockade. There I discovered that protesters had erected banners at one end of a bridge leading into the city, and at the other end of the bridge I found the smoking remains of a fire. I then attempted to interview a protester on the bridge. That protester requested that I not show his face in the video, because he was fearful of government reprisals. Pedro Cabezas, a member of our delegation who is from the Central American Alliance Against Mining, stood beside me and acted as a translator.

DIMITRI LASCARIS: What exactly about this president is upsetting to the people?

DIMITRI LASCARIS: As Pedro and I spoke with the protester a woman began shouting, At which point protesters who had gathered on the bridge quickly dispersed. As they did so, those protesters chanted “Out JOH.”

Police immediately responded with tear gas volleys. Soon tear gas was raining down all around us. The protesters fled the scene. The six members of our delegation who had assembled at the bridge fled with the protesters. All six of them suffered effects from the tear gas, but ultimately we recovered from those effects. The next day we returned to the bridge outside El Progreso and discovered that protesters had returned. We took the opportunity to talk with them about why they had come back, and what they hope to accomplish. That will be the subject of part two of this report.

This is Dimitri Lascaris for The Real News.