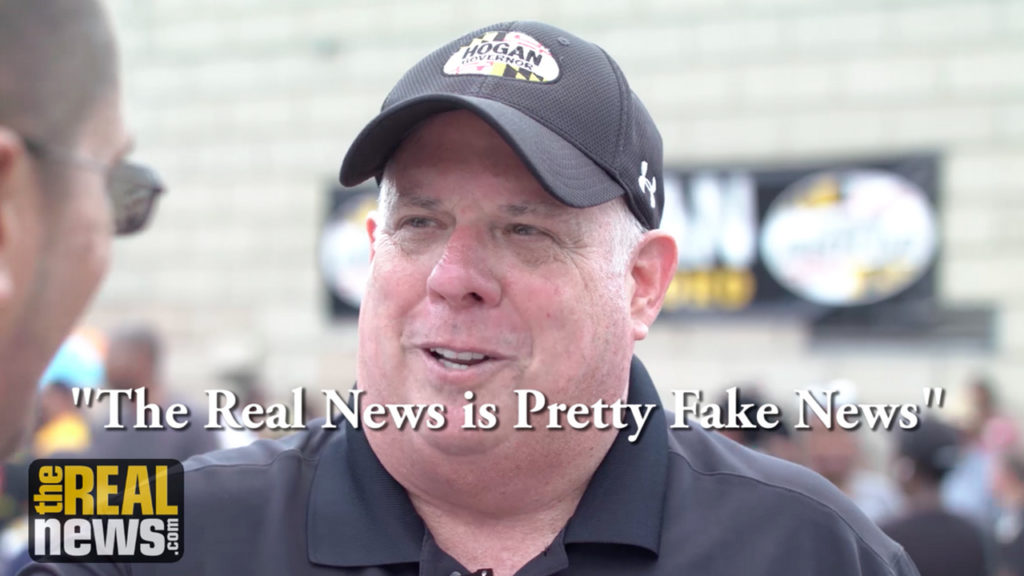 JAISAL NOOR: Before becoming the governor of Maryland, Larry Hogan served on the board of the Maryland Public Policy Institute, a conservative think tank that opposes funding for public transit, and sees Betsy DeVos’ disastrous education reforms in Michigan as a model for Maryland. The Institute is part of a web of groups that opposes unions, worker protections, and environmental regulations that investigative reports have found are secretly backed by the Koch donor network.

So I asked Hogan, who’s doing well in the polls in a state Democrats outnumber Republicans 2-1 if it’s fair for him to call himself a moderate when he has ties to a group that pushes an extreme agenda, some of which he supports.

I know you billed yourself as a moderate. You’ve distanced yourself from Donald Trump. But you’re also a member of the Maryland Public Policy Institute, which is part of the State Policy Network, which is funded by the Koch brothers. Do you think you’re-

JAISAL NOOR: You can hear me began to say ‘President Emeritus,’ but he’s actually Director Emeritus of the Maryland Public Policy Institute, which has been called the policy arm of the Hogan administration. Hogan called my question fake news, but here’s what we do know.

The Institute wouldn’t tell us who their donors are, but according to tax records obtained by Conservative Transparency, their leading donors through 2014, which covers the period Hogan served on their board, is Donors Capital Fund, which has been called the dark money ATM of the conservative movement. Another major funder is State Policy Network, who, according to a report by the Center for Media and Democracy, is funded by the Koch donor network. On top of that, an adjunct staffer at the Institute, Wendell Cox, is the former legislative director of ALEC, the American Legislative Exchange Council. Another arm of the Koch network, which pushes corporate-friendly and anti-worker model legislation in statehouses across the country.

The Kochs gave the maximum amount to Hogan’s 2018 campaign, and Politico reported their voter data contributed to his stunning 2014 victory. Liberals have their wealthy donors, too. George Soros gave the maximum allowed donation to Hogan’s opponent. But investigative journalists like Jane Mayer have chronicled the outsized influence the Kochs and their allies have on U.S. politics. And while Hogan decried my question as fake news, he hasn’t opposed deceptively-edited Republican Governors Association ads targeting his opponent Ben Jealous.

REPUBLICAN GOVERNOR ASSOCIATION AD: Go ahead, call me a socialist.

JAISAL NOOR: If you keep playing the tape, Jealous was actually saying he’s not a socialist.

BEN JEALOUS: Go ahead, call me a socialist. Doesn’t change the fact I’m a venture capitalist.

JAISAL NOOR: Some have questioned why Jealous is so defensive about being called a socialist in the first place.

REPORTER: Not to put too fine a point on it, but do you identify with the term ‘socialist’?

BEN JEALOUS: Are you fucking kidding me? Is that too fine a point?

JAISAL NOOR: In Maryland, Democrats outnumber Republicans 2-1. And according to a new Gallup poll, a majority of Democrats nationally have a more positive view of socialism and a negative view of capitalism. But that hasn’t stopped the Republican Governors Association from running ads like this.

REPUBLICAN GOVERNOR ASSOCIATION AD: Jealous is too extreme for Maryland.

JAISAL NOOR: The Kochs oppose regulations on healthcare, as do pharmaceutical and insurance companies, who donated over $300,000 to help air ads like this.

JAISAL NOOR: They don’t mention this would cut what the average Maryland resident spends on healthcare by half. Polls show that majorities of Maryland Democrats embrace single-payer healthcare, a $15 minimum wage, and even a jobs guarantee.

HOGAN SUPPORTER: They have a lot of people that need jobs. Need jobs bad.

JAISAL NOOR: So how would you, what do you think about a policy that would say anyone that can’t get a job in the private sector, the state will give them a job? A living, a living wage so they don’t have to, you know, sell drugs or commit crimes? Would you support that?

HOGAN SUPPORTER: I’d support that. Because you need-.

Many analysts predict a blue wave against Republicans sparked by Donald Trump’s presidency, which Hogan predicts he can harness.

LARRY HOGAN: Good news is that I know how to surf. And 68% of all the Democrats in Maryland support my candidacy. So if there’s a wave of Democrats coming out, they’re going to be voting for me.

JAISAL NOOR: While Hogan touts his support among Democrats, the vast majority of elected Democrats have endorsed Jealous. And critics say Hogan’s policies are more similar to those backed by Trump and the Kochs than he’d like to admit.

JAISAL NOOR: And while Jealous’ platform is more akin to FDR’s New Deal, Hogan’s governorship has included some cuts to those same institutions.

ZEKE COHEN: When you are taking an absolute hammer to our transportation system and crushing what was a $3 billion investment in high-speed East-West transit, that’s not being a moderate.

JAISAL NOOR: And while the media’s focused on a recent high-profile spat between the Kochs and Trump, they continue to work together to reduce taxes for the wealthy and gut environmental regulations. And while there aren’t direct links between Hogan and the Kochs, he supports some of the policies that are at the heart of their agenda, and of Donald Trump’s. It remains to be seen what impact that will have in the deeply blue state in November, where the Republican governor remains deeply popular.