Why Was Gaddafi Overthrown?

Horace Campbell: Gaddafi wanted to strengthen Pan-Africanism and had enough resources to challenge US hegemony in the region

Horace Campbell: Gaddafi wanted to strengthen Pan-Africanism and had enough resources to challenge US hegemony in the region 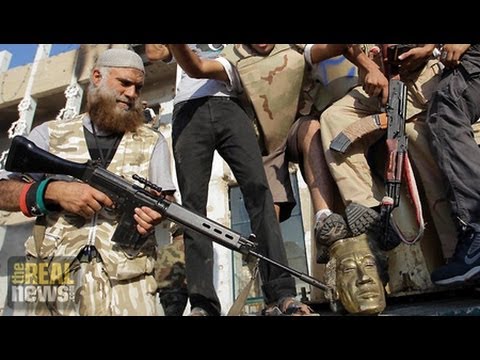 March 19 will be the third anniversary of the NATO intervention into Libya. Looking back, what were NATO’s objectives? What Libya did they hope to find after the overthrow of Gaddafi? And what in fact is today’s Libya?

Now joining us from Syracuse University is Professor Horace Campbell. He teaches African-American studies there and political science. He’s written extensively on African-American politics. And his new book is called Global NATO and the Catastrophic Failure in Libya.

Thank you very much for joining us, Horace.

HORACE CAMPBELL, PROF. AFRICAN-AMERICAN STUDIES AND POLITICAL SCIENCE, SYRACUSE UNIV.: Thank you for inviting me to discuss the failures of the U.S. foreign policy in Africa and the failure of NATO in Africa.

NOOR: So it was only a day or two ago, Navy SEAL sailors boarded a Libyan-North Korean boat carrying oil coming from a rebel-held oil port in Libya. This was, I guess, to send a message that the central government, so-called, of what is recognized by the United States, and nobody else should be selling oil. But it’s a reflection of what chaos there is in Libya.

Give us a sense now of what’s going on in Libya, and then we’ll kind of dig further back into why this all came about.

But that destruction has only created a great problem for Western capitalist forces in Africa.

JAY: I don’t quite understand why the West simply wanted to destroy Libyan society. Gaddafi’s regime was playing footsie with the IMF, with the World Bank. His sons were knocking the gavel at the stock exchange. In fact, one of his sons was visiting American military manufacturers, negotiating arms deals just before the invasion. They were doing oil and gas deals. There’s reports from the World Bank praising his reforms and privatization of the Libyan banking system. I mean, he cooperated with Bush–Cheney in many ways. He had made a big reconciliation with the Americans. I don’t understand, on the face of it, why they wanted to overthrow him. Obviously they did, but I don’t think that explains it.

CAMPBELL: That is all very true. But you’re missing one factor: that every political leader seeks political legitimacy. And in the case of Libya, the legitimacy of the leader had come from his presenting himself as someone who was part of the African Union and wanted to build an African Monetary Fund, an African Central Bank, and a African common currency. And that was a danger to not only the euro, because Sarkozy said, we’re going to fight to save the euro, but it would present a threat to the dollar. Moreover, the Libyan leadership had moved to take over the Arab banking corporation in Bahrain, and the Libyan leadership had over $200 billion in foreign reserves.

So, yes, you’re correct. They were playing footsie with the West. But that same leadership was also capable of nationalist pressures inside of Libya and inside of Africa so they could have nationalized oil companies in the midst of this global capitalist crisis. And the West did not want any surprises, where Libya would want to call on Africans to turn away from the dollar as the reserve currency and to use African resources, such as gold, as a new currency for all of Africa.

JAY: But, Horace, what evidence is there that they were really concerned about this? I know Gaddafi talked about it, but, I mean, he himself was up to the eyeballs in the World Bank. And, you know, rhetoric is one thing, but the reality of the Libyan economy was becoming totally assimilated into global capitalism. It seems to me more that there was a problem is that he was also playing footsie with the Russians—

JAY: —and there was more that he was caught in these inter-imperialist contradictions. I mean, you can’t tell me Libya had the power to change the currency of Africa.

CAMPBELL: They did, because Libya have $200 billion in reserves, and if Libya got five or six other African countries with massive reserves to create a common currency for Africa, which is one of the mandates of the African Union, that’s a threat to Western Europe and North America.

Moreover, the Chinese had become the dominant force in infrastructure development within Libya. There were over 36,000 Chinese involved in railway, road, water, agriculture, and other forms.

So there’s no question that Libya had the financial wherewithal to determine their own independence.

And I think one of the things that the media is missing, even those who call themselves the left, is the role that Goldman Sachs and their dalliance trying to use the resources of Libya to shore up the derivatives market and the fact that they were so involved in Libya prior to intervention.

JAY: Yeah. Well, talk a bit about that. Why was Gaddafi so involved with Goldman Sachs?

CAMPBELL: Well, that is the point. The point was that Gaddafi wanted to please the Western forces. Gaddafi’s son had studied in the London School of Economics. Gaddafi had been open to talking to this group from Boston that was going there. And all of these forces were trying to ingratiate themselves with Gaddafi, so that Gaddafi would completely be in the pockets of the West.

But he was unpredictable, and that was the problem between them and Gaddafi.

JAY: Yeah, I agree with that part. He was unpredictable. But he was very much playing ball. He was very close to the new rising Rothschild. He was playing ball with the commodity brokers. I mean, he was using the Libyan sovereign wealth fund like a private investment thing, just to—really playing with every speculator in Europe and America.

But I agree with you: he was unpredictable, and he was playing ball too much with the Chinese and with the Russians, and that he wasn’t becoming a reliable ally in Northern Africa. That—I think that much is for sure.

But there was a lot of differences in the West about what should be done and what the objectives were.

CAMPBELL: The differences in the West stems from the fact that there is a rivalry between the European Union and the United States over the reserve currency. The entire Western world is in the midst of a global capitalist crisis since 2007, 2008, and it’s imperative that they use the military to keep forces in Africa, Asia, Latin America, and Europe in line behind the dollar as the currency of world trade.

JAY: But, Horace, the Chinese have—first of all, they own several trillion U.S. dollars, and I think they’ve made it very clear for at least for this historical period they are not going to challenge the U.S. dollar as a reserve currency. Far from it. They rely on the Americans to manage this whole global system.

JAY: Yeah, this is true.

CAMPBELL: [incompr.] $65 billion dollars every month. If the United States of America is putting $65 billion every month on the world market, nobody wants to keep their reserves in dollars. So the Chinese, the Brazilians, everybody’s looking for the exit from the dollar, because the capitalist prices means that the dollar is worthless, because if anyone can have a printing press to print dollars, then other currencies are worthless.

JAY: Okay. Then why is everybody buying American dollars? I mean, they’re getting people to buy T-bills with practically zero percent interest.

JAY: Yeah, but I agree with that. But all these other governments and elites rely on that.

CAMPBELL: The elites in Latin America and Africa are seeking ways to exit this, in Latin America, Venezuela, Cuba, Ecuador, and all these countries are seeking an exit from the dollar. They’re trying to create a common currency in Latin America. In the Asian countries, they’ve created alternatives. In Malaysia, Singapore, Thailand they have created alternatives. The reality for the world is we’re living in a dangerous moment because of this capitalist crisis where the United States military is shoring up the printing of dollars and this condition in the world where the United States have unlimited access to the resources of the world.

JAY: And you think is what triggered the Libyan intervention.

CAMPBELL: This is one of the factors in the Libyan intervention. Initially the United States government was hesitant because this was a plot by the French to go into Libya. And at the outset, the secretary of defense Robert Gates and Mullen said before the Congress, do you have evidence that Libya was about to destroy their people. And the military in the United States, the United States Africa Command was originally opposed to going into Libya. But the pressures of Goldman Sachs, along with those people called the humanitarian hawks—Samantha Powers, Susan Rice, and Hillary Clinton—[incompr.] the American public and the media to go along with France and Britain for the destruction of Libya in 2011. And the people of Africa are still living with this destruction, where over 50,000 people in Africa have been killed, 40,000 people, black-skinned from Tawergha, have been thrown out of where they live. And so we have to see that initially the United States military was opposed, but later on, the media, along with Clinton, Rice, and Powers, were able to build up the psychological warfare and propaganda within this society against the United States people to portray Gaddafi as this terrible leader, when, as you said, he was in league with the Western banking and financial institutions.

JAY: Alright. Thanks very much for joining us, Horace.

CAMPBELL: Thank you very much.

Horace Campbell is Professor of African American Studies and Political Science at Syracuse University. His recent book is Global NATO and the Catastrophic Failure in Libya. He is author of: Rasta and Resistance From Marcus Garvey to Walter Rodney ; Reclaiming Zimbabwe: The Exhaustion of the Patriarchal Model of Liberation ; Pan Africanism, Pan Africanists…