Guilt by Association? Arrest of Assange Friend Has No Basis

Cyber-security and privacy expert Ola Bini was arrested in Ecuador the same day that Ecuador revoked Julian Assange's asylum. A court now affirmed his pre-trial detention, while his parents and his lawyers say it has no basis

Cyber-security and privacy expert Ola Bini was arrested in Ecuador the same day that Ecuador revoked Julian Assange's asylum. A court now affirmed his pre-trial detention, while his parents and his lawyers say it has no basis 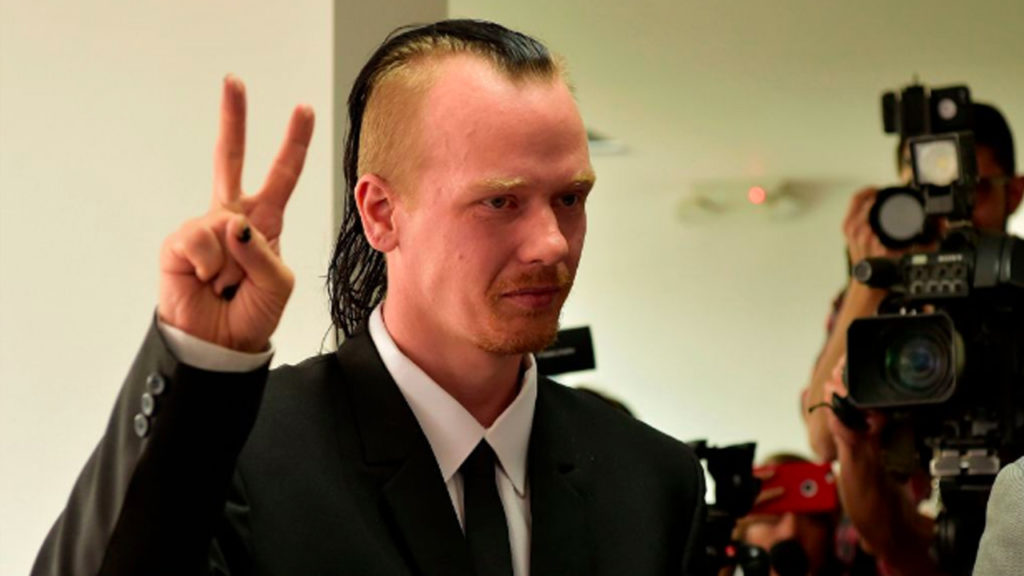 GREG WILPERT: Ola Bini, a friend of WikiLeaks founder Julian Assange, was required to remain in jail on Thursday in his appeal for release from an Ecuadorian prison. Bini, a cyber-security expert, has been in prison since the day that Ecuador revoked Julian Assange’s asylum at the Ecuadorian embassy in London. Prosecutors have vaguely accused Bini of hacking Ecuadorian government computers, but have not filed any specific charges against him. An appeals panel of the Provincial Court in Quito ruled, in a 2 to 1 decision after three hours deliberation, that Bini must remain in prison while the investigation against him continues. Prosecutors argued that Bini represents a flight risk and could interfere in the investigation. Bini’s lawyers, Carlos Soria and Jose Charry Dávalos, reacted to the ruling as follows:

CARLOS SORIA, OLA BINI’S LAWYER: This is an embarrassment, dear journalists. My client, our client, is an innocent person, who has contributed to the entire world on matters of privacy of information, and now, because he is a friend of Julian Assange, or because he travels a lot…

JOSE CHARRY DAVALOS, OLA BINI’S LAWYER: Three hours of deliberation and the court’s majority opinion still couldn’t tell us what are the charges or how the elements of the detention are enough, simply justifying preventative prison with a supposed jurisprudence that was never named, supposed sentences that were never cited, and supposed juridical rules, that were also never named, this isn’t enough.

SHARMINI PERIES It’s The Real News Network. I’m Sharmini Peries coming to you from Baltimore. When the Ecuadorian government had revoked Julian Assange’s asylum and kicked him out of the embassy in London on April 11th, they also had a friend of his arrested— Ola Bini, who was living in Ecuador. He was arrested the same day. The Ecuadorian government accuses Ola Bini, who is a Swedish citizen, of helping Assange to hack Ecuadorian government computers, including President Moreno’s telephone. Bini’s friends and family vehemently deny that he would be involved in such activities, since he is a well-known defender of digital privacy. Joining me now from Quito, Ecuador to discuss the case is Ola Bini’s parents— his mother, Dag Gustafsson and his father, Gorel Bini. I thank you so much for joining us today.

DAG GUSTAFSSON Thank you for being here.

SHARMINI PERIES First of all, let me begin by saying how sorry I am that you’re undergoing these horrible and terrifying circumstances with your son being held in this way.

SHARMINI PERIES Alright. Dag, let me go to you first here. The last tweet we saw from Ola is that he was going to leave to go to Japan to do some training. He was excited. He had never been to Japan. He was just doing his normal day’s work, heading out to do some training. Tell us what exactly happened to him.

DAG GUSTAFSSON What exactly happened is when he got to the airport and checked in and went to the gate where he should leave from, he was arrested by the police. They took him aside and took him.

DAG GUSTAFSSON Because Ola had a little time before they took his phone to send text messages to a couple of his friends. And his friends, very fast, spread the news that Ola has been arrested. So late in the evening, Thursday night, at home in Sweden, Ola’s former wife called us and told us what has happened. So we knew it after a couple of hours, what’s happened.

SHARMINI PERIES Alright. You’ve had a chance to visit with Ola. Do we know the charges that he’s been charged with by the Ecuadorian government? What is he accused of?

DAG GUSTAFSSON No. As far as the information we got from his lawyer, it is very vague. It’s some kind of data intrusion, some kind of hacking of the president’s phone, but there has not been a precise accusation made from the prosecutor. So he [doesn’t] know what crime he is supposed to have been doing, how it should have been, where, or when. So it’s very vague.

SHARMINI PERIES Right. Gorel, you can answer this. What do we know about Ola’s relationship with Assange? Were they working together? What is the connection?

GOREL BINI No, they were friends. Just friends.

SHARMINI PERIES Okay. And just by virtue of being his friend, he has been arrested. There must be some trail off activity leading to Ola. Do we know, or had they mentioned any of this to warrant an arrest of this sort?

GOREL BINI No, they haven’t mentioned that at all, I believe. And just being a friend to Assange shouldn’t be a crime, I believe.

GOREL BINI Yes. He’s lived here for six years, I believe, and working. He started working in ThoughtWorks when he came here. And then, he had started with a nonprofit organization called CAD, right? A few months ago, I believe?

SHARMINI PERIES Tell us about the organization that he has built and why he needed to be in Ecuador to do that work.

DAG GUSTAFSSON Yeah. He started building up this organization based on what he’s passionate about and that’s the digital aspects of human rights and freedom of speech on the internet. He’s very active on that and that is his passion— to make the internet working better for privacy causes and so on. That we ordinary people could speak, communicate, have the freedom of speech on the internet, without risking to be overheard from organizations and governments, and so on. So that is basically what this organization is working with.

SHARMINI PERIES Okay. We, here at The Real News, interviewed Guillaume Long, who was Ecuador’s former foreign minister and he said that he believes President Lenin Moreno is partly motivated by vengeance here. That he’s very upset that certain documents were leaked about his personal financial situation, about his accounts, and photographs were released of the kind of people he was hanging around with. And this all led to him being publicly embarrassed, which led to the arrest of Ola Bini. Do you think there’s any truth to that?

DAG GUSTAFSSON We are not so— we don’t know so much about the political situation in Ecuador and don’t know enough to say anything about that really.

SHARMINI PERIES Okay. So in terms of Ola’s case here, what are the next steps? What are you waiting for? You’re obviously waiting for his release, but what are the conditions that they are placing on him before he could be released?

DAG GUSTAFSSON Next step is now Thursday, the 2nd of May because then there is going to be a new hearing. The first hearing was-— I don’t know the English word, but— overruled by his lawyer and therefore, there’s a new one happening now on the 2nd of May. Our hope is, of course, that the judge will take into consideration the actual evidence. The evidence that they have is the book of Noam Chomsky, a couple of USB sticks, and a couple of computers. There’s no witness of any crime being done. And as I said earlier, it has not been specified exactly what the crime he was supposed to have been doing. So there is no legal ground for Ola to be in prison. So of course, he should be released on Thursday.

SHARMINI PERIES And is there any message that Ola asked you to communicate with the world?

GOREL BINI And he said that he will continue to do that when he gets out.

SHARMINI PERIES Alright. I thank you so much for joining us today and letting us into the life of Ola Bini and also what you’re experiencing there. I wish you all the best in trying to get him out of prison.

SHARMINI PERIES I was speaking with Dag Gustafsson and Gorel Bini, the parents of Ola Bini, who had been arrested two weeks ago in Ecuador in connection with the revocation of Julian Assange’s asylum in London. I thank you all for joining us here on The Real News Network.