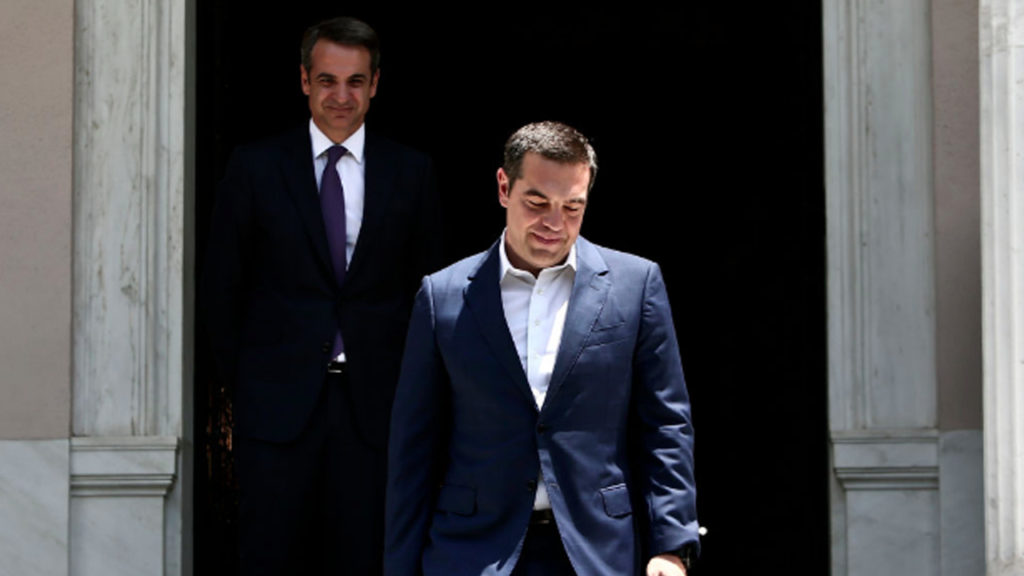 DIMITRI LASCARIS This is Dimitri Lascaris reporting for The Real News Network from Montreal, Canada. Yesterday, after almost a decade of punishing austerity and humiliating bailouts, Greek voters returned to power the right-wing New Democracy Party led by the Kyriakos Mitsotakis. The new Prime Minister is a Harvard-educated former banker. He is also the son of former Greek Prime Minister Konstantinos Mitsotakis, also of the New Democracy Party. New Democracy’s victory was resounding. It brought an end to the 4.5-year reign of Alexis Tsipras and the party he led, Syriza.

Mr. Tsipras and Syriza first came to power in January 2015 on a platform that many in the mainstream media characterized as “radically left.” Syriza’s leadership vowed to oppose the harsh austerity measures being demanded by Greece’s troika of creditors— the International Monetary Fund, the European Central Bank, and the European Commission. But after Greek voters overwhelmingly rejected a new regime of austerity in a historic referendum held four years ago on July 5th, 2015, the Syriza government agreed to even harsher measures than had been in place before it came to power. That agreement provoked a revolt within Syriza. Numerous Syriza MPs left the party to join a new anti-austerity left-wing party called Popular Unity led by Panagiotis Lafazanis, a minister in the first Syriza government.

One of those defectors was Costas Isychos. Costas served in the first Syriza government as Deputy Defense Minister. He studied Political and Economic Science at York University in Toronto, Canada. He then followed Political Studies in Havana, Cuba. He came to live and work in Athens, Greece in 1980. He participated in left-wing political movements since his early youth, following the same road in anti-war, pro-peace movements until today. Thank you for coming back onto The Real News, Costas.

COSTAS ISYCHOS It’s a great pleasure to be with all your viewers and with you, Dimitri.

DIMITRI LASCARIS Costas, I want to start by asking you to comment on the big picture. Without question, Greek voters are fed up with austerity and have been for a long time, but I very much doubt that any rational objective observer would characterize New Democracy, now led by a former banker, as being anti-austerity. In your opinion, why did Greek voters hand New Democracy a landslide victory in this election?

COSTAS ISYCHOS Well, that’s a very important question and I guess it’s the most frequent question we’ve been asked these last 24 hours. I suppose that the Greek voters voted against Alexis Tsipras. They did not vote in favor of New Democracy’s program, which of course, it’s a neoliberal party with a neoliberal program and with very close ties to the American establishment, and the Brussels establishment, political establishment. A party, which is very close to NATO and to all the pro-war activities of NATO in this region, so it’s difficult to answer this question. I would simply say that the voters voted and somehow punished Alexis Tsipras for these last four years because he did not keep his pre-electoral promises and program.

After that historic referendum with an overwhelming 62% against austerity and against the troika programs, Tsipras went down on his knees, I could say, and with his government being a sound good student for the troika, the IMF, the Brussels establishment, and the European Union establishment. So that would be my answer: voters punished Tsipras. They did not vote in favor of Mitsotakis. They just voted for someone who perhaps would be a government that generally aligns and would say good things for people to hear with no clear solutions, no clear answers to today’s deep economic, social and political problems in Greece.

DIMITRI LASCARIS So let’s talk about the answers, or lack thereof, that New Democracy offered in this election campaign. Prime Minister Mitsotakis has promised to create better jobs for Greeks through growth, foreign investment, and tax cuts, but Greece remains burdened by a crushing debt load amounting to approximately 180% of GDP. Also, despite repeated requests from the Greek government for major debt relief, Greece’s troika of creditors do not seem serious about granting major debt relief at least at this time. And on top of all of that, the Syriza government committed Greece to maintaining a primary budget surplus, which excludes debt servicing costs, of 3.5% of GDP until 2022 and remarkably 2.2% of GDP until 2060, so for over another 40 years. Few if any countries, as I’m sure you know Costas, have been able to maintain a primary budget surplus of that magnitude for that long. Given the straitjacket in which Greece’s creditors have placed the Greek government, do you think there is any realistic prospect of this new government generating sustainable and robust economic growth leading to plenty of better jobs, as promised by Mr. Mitsotakis?

COSTAS ISYCHOS Well, Dimitri, you presented a lot of data which is very real, and it has created a lot of hardship in Greek society. 500,000 young people from Greece between the ages of 22 to 35— students, graduates, medical doctors, technicians, architects, well-informed people with a great education— have left the country in order to seek a better future in the far corners of the world. So we have a brain drain, which is probably one of the biggest problems in Greece. A generation brain drain which will create very acute problems in the near future. The second point I want to make very clear is that almost 300 billion euros are what Greece has to pay in debt to the troika. This cannot be paid in more than five generations. And I doubt with such a surplus, which is required with over 2.2% of its GDP per year, that has never taken place for more than a 10-years [period] in any country in the world. There is no historical record of that, so I don’t know how Greece is going to do it.

Greece has lost a lot of its agricultural production. It has participated in the sanctions against Russia. It has lost more than half a billion euros in the last four or five years. Because of the sanctions, we cannot export our goods to Russia, and we have no other markets to export our agricultural goods. We have other problems concerning our military expenditure. Greece is the first country in NATO which complies with more than 2% of GDP in buying NATO arms. We are an excellent student as a NATO member. We have no jobs for young people. We have no good social-medical welfare and social policies, including for older people who have we have to take care of them, but we do spend a lot of money in military expenditures for NATO. So along with the other data you gave us and the data I am giving you today, there is no real perspective for New Democracy to wait hopefully for money to come in and create new jobs from anywhere in the advanced countries. It’s the exact opposite.

We are exporting our youth. We are exporting our brains. We have stopped exporting olive oil as one of the major oil-producing countries in the Mediterranean, as far as quality is concerned. So you understand that there’s no real perspective for Greece to expect any type of a miracle in its economy. For more than 60 years we’ll be under supervision of our economy by the troika. We’ll be inspected every three months to comply with all of these privatization processes. Mr. Mitsotakis has promised the privatization of public health, of education— especially in universities where we have free education. We’ve had it since the birth of our country in 1821, free education and for universities for all Greeks. That will be gone, and you can imagine what the prospects are for this country and for its society if Mitsotakis complies with this program.

COSTAS ISYCHOS I think it’s going to be business as usual. We have to point out that Greece is part of a new alliance in the region. It’s called the EastMed Project. It’s a pipeline that’s going to supply natural gas from the economic exclusive zone between Israel and Cyprus. A new pipeline will be constructed that will be going through Israel, Cyprus, the south of Crete, into the Ionian Sea, and going after that into Central Europe. Now this alliance, which is a common bill that was proposed to the US Congress under the supervision of Mr. Menendez and Mr. Ted Cruz from the Republican and the Democratic Party, which are in complete agreement, these two parties in the United States Congress. This new military project and this new energy project is already creating a lot of problems between Greece and Turkey, as you know— and Turkey and Cyprus, and Israel and Lebanon, and the Palestinian territories, which also have an exclusive economic zone which is denied by Israel.

So you see the complicated situation which Greece is entangled with at this moment in this new military-energetic alliance between these three countries— Israel, Cyprus, and Greece. It’s creating a big danger in the region. In 2015 and before that, Syriza had a completely different agenda. We were against NATO budgets. We were trying to freeze our budgets and the military expenditure in NATO, and tried to put that money into health, into education, into social needs, into new jobs, and pumping money into the economy to create good, productive, real, dignified jobs for the youth. Now, this has not happened. Instead for the last four and a half years, Syriza has followed a completely different road and a neoliberal track of new economic measures, which Mr. Mitsotakis will not only continue, but will enforce even more. So this is the real dilemma and the real problem for Greece and the Greek people. I would say for the United States, it’s a win-win situation whether Syriza or New Democracy are in power. These two parties will comply with Euro Atlanticist policies followed in the region in the geopolitical context, and also in the social, political, economic and energetic context also.

DIMITRI LASCARIS Well, this has been part one of our interview with Costas Isychos. Please stay tuned for part two of our interview in which we’re going to discuss some of the more notable developments in this particular election.