Garteh Porter pt 2: Questions are raised as to whether the White House omitted information in its intelligence report to support President Obama's agenda to strike Syria

Garteh Porter pt 2: Questions are raised as to whether the White House omitted information in its intelligence report to support President Obama's agenda to strike Syria 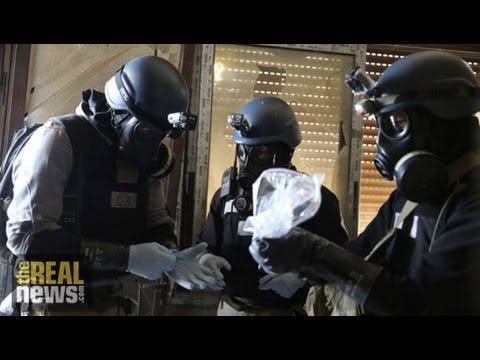 JAISAL NOOR, TRNN PRODUCER: Welcome to The Real News Network. I’m Jaisal Noor in Baltimore. And welcome to this latest edition of The Porter Report.

We’re now joined by Gareth Porter. He’s a historian, investigative journalist on U.S. foreign policy and military policy. He writes regularly for the Inter Press Service. And he received the U.K.-based Gellhorn Prize for Journalism in 2011 for his articles on the U.S. war in Afghanistan.

Thank you so much for being with us, Gareth.

NOOR: So, Gareth, let’s just start continuing our discussion. What points exactly do you find not credible with the August 30 intelligence assessment on the Syrian gas attack?

PORTER: Well, a couple of points leapt out at me as I read the August 30 paper put out by the White House and of course claimed to be an intelligence assessment representing the intelligence community’s view of the available intelligence, but in fact something that the White House itself decided on culled out the points that they wanted to put into it, obviously could have omitted other intelligence that didn’t fit the government’s point of view and did not support their policy.

One of them was the famous intercepted or purported intercepted set of conversations between a senior Defense Ministry official in Damascus and a lower-ranking chemical weapons person in the Syrian military. And supposedly, according to the description put out by the White House, this senior official, in the process of discussing with the chemical weapons specialist, quote, confirmed, unquote, the fact that Syrian government had actually carried out this attack.

But other leaks, or at least one leak to the news media in advance of the release had put a different characterization on this, which allowed one to raise serious questions about whether that language was in fact accurate. The leak suggested that in the conversation a panicked senior official in the Defense Ministry had been talking with this specialist and asking questions or asking about an attack, a nerve gas attack that day.

Now, of course, that leaves plenty of room for all kinds of possibilities of what was actually said in the conversation. He could have been, obviously, responding to the allegations of a nerve gas attack that were coming from social media sources, activists in the area where the attacks were said to have taken place. And so it may not have mended all what the administration was claiming in their paper.

And furthermore, there is serious question as to whether this intercept, if it actually existed, was something that U.S. intelligence was responsible for, because there are all kinds of sources that quote an Israeli former senior intelligence official saying that it was the Israeli military intelligence that actually made the intercept and that had passed it on to the U.S. government. Now, assuming that that’s the case, then we have a very different story line, because we know from past experience–and I’ve talked with former U.S. intelligence officers who’ve confirmed this–that the Israelis never pass on the actual full record of the intelligence, whether it’s a recording or a document. They simply give the United States a description of what they claim they have found and report it. And in this case, that would leave plenty of room for the Israelis to doctor, again, the significance, the meaning of what was intercepted if in fact they did intercept something. So that’s the first point. That’s the first major storyline.

The second one is about a claim that U.S. geospatial and signals intelligence actually was able to establish that the Syrian military had made preparations in the three days before August 21 for a chemical weapons attack, and it was simply stated baldly that that was the case. And, again, there were other versions of this leaked to the news media, at least one version which made it clear that in fact the intelligence community had picked up some kind of indications that somebody that they thought was related to Syrian chemical weapons had been in an area where they thought there had been mixing of chemical weapons in the past, but that they found nothing unusual in the presence of the person. They didn’t think that there was anything significant about it. And it’s very clear that after the alleged attack, the officials decided simply to reinterpret this data to make it evidence to support the administration’s position that definitely the Assad regime carried out a nerve gas attack. So there’s a reason to be very suspicious about the firmness of this intelligence, as opposed to something in which they made an inference and then changed their mind about the inference that they were going to make from the intelligence. I think we’re talking about very ambiguous intelligence in this case.

PORTER: –to just mention one case where I think it’s very clear that this was reported by the U.S. intelligence community, but reported in a way that indicates that they’re not at all sure about the evidence, in terms of the visual evidence from the videos supporting firmly the idea that there was a sarin or a nerve gas attack. And that is a statement in this August 31 report that says that there were videos that were sampled–samples of videos were viewed from 12 different locations where there was an alleged attack, and the statement was made that some of those videos clearly were filmed at the time and place where it was stated. Now, that’s a very strange statement to make, in the sense that it leaves one to infer that some of the videos were not clearly filmed at the time and place claimed. So that would suggest that the video evidence was much less convincing, much less dispositive than the paper of August 30 would like us to believe.

NOOR: So two follow-ups for you, Gareth. The first: talk more about the significance of the sourcing of intelligence from Israeli officials. They’re not exactly an impartial source here. They have–you know, they’re interested in seeing this attack go through by many accounts. And also, can you comment on how especially the U.S. media has reported on these intelligence claims and the claims of the U.S. government? You see how the U.S. government claimed that 1,500 people were killed in this gas attack when even, you know, European intelligence groups and even pro-opposition Syrian human rights groups dispute that claim and say that number totaled far less–instead of 1,500, approximately 400 or 500.

PORTER: Well, on the first question, it’s very interesting, of course, that the Israelis seem to be implicated in that reported intercepted conversation. As you’ve suggested, the Israelis are an interested party in this. We are pretty clear, in fact, that Benjamin Netanyahu and the Likud government would definitely like the United States to carry out a strike or a set of strikes against the Syrian government–the more the better, from their point of view.

And it’s also interesting that we know that the Israeli military and intelligence establishment includes a lot of people who question the Likud government’s policy toward Iran, which is the single biggest reason why they want the United States to strike Syria, in order to either weaken Iran or, even better, to provoke some kind of open confrontation between the United States and Iran. And there are Israelis, both in the intelligence community in Israel and in the military, that are very skeptical about this position. And I do not doubt that the person who reported this may have been someone who was one of those doubters, who wanted to out the people who were using this, presumably for Israel’s own interest.

And on the other question that you’ve posed–let’s see now. Remind me what that question was again.

NOOR: I wanted you to comment on how the U.S. media has been reporting the claims by the U.S. government. I mentioned the claim of the 1,500 dead in the gas attack and how that’s been disputed by many sources, including pro-opposition human rights groups.

PORTER: Well, absolutely. I mean, there are plenty of reports that conflict with this statement in the August 30 paper baldly stating that we believe that 1,429 people, precisely 1,429 people were killed in this attack. And the figure is questionable both for its precision and as you’ve indicated, because it is several times higher than the figures that have been used by other sources, including both the British and French intelligence estimates or papers that have been published. So it’s extremely questionable.

And, by the way, the way in which it is presented in this paper clearly indicates that this is not coming from U.S. intelligence community. This is something that was inserted into the paper by the White House. The wording itself is very clearly indicating that this was separate from the part of the paper that comes from the intelligence community.

NOOR: Gareth Porter, thank you so much for joining us.