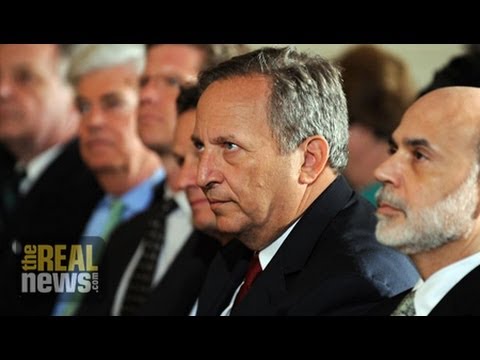 Investigative journalist Greg Palast has obtained a secret memo authored by then deputy Treasury secretary Larry Summers and his protégé Timothy Geithner detailing their plans to roll back financial regulation. In the piece, titled “The Confidential Memo at the Heart of the Global Financial Crisis” for Vice, Palast writes:

“The Memo confirmed every conspiracy freak’s fantasy: that in the late 1990s, the top U.S. Treasury officials secretly conspired with a small cabal of banker big-shots to rip apart financial regulation across the planet. When you see 26.3 percent unemployment in Spain, desperation and hunger in Greece, riots in Indonesia and Detroit in bankruptcy, go back to this End Game memo, the genesis of the blood and tears.”

Now joining us to discuss this article is Greg Palast. He’s a BBC investigative reporter and author of Vultures’ Picnic. Palast turned his skills to journalism after two decades as a top investigator of corporate fraud. Palast directed the U.S. government’s largest racketeering case in history, winning a $4.3 billion jury award. He also conducted the investigation of fraud charges in the Exxon Valdez grounding.

Thank you so much for joining us, Greg.

GREG PALAST, BBC INVESTIGATIVE REPORTER: Glad to be with you, as always.

NOOR: So, Greg, can you describe this memo you obtained and the context in which it was circulated, as well as its contents and its significance today?

PALAST: It’s really significant today, because the memo is written to Larry Summers, who was at the time the deputy Treasury secretary, and he was about to become Treasury secretary under Robert Rubin. It came to him from Timmy Geithner. Timmy would become Obama’s secretary of the Treasury.

This is really important right now because Larry Summers is President Obama’s top choice to become head of a Federal Reserve Board. This would make him the most powerful economic decision-maker in America, more powerful than the president even, and it’ll last for years. He would take Ben Bernanke’s place. It’s quite shocking to have Summers’ name come up as head of the Fed, and especially–and therefore especially now that I have this memo in hand.

And what this memo is–they call it the “end game memo”. Geithner calls it the “end game”. And what’s the game being played? The memo asks Summers to get back to the five biggest, most powerful bankers in the United States to act on and determine what our policy should be for world governance of the banking system. Basically, there were secret calls going between Larry Summers and the head of Bank of America, the head of Goldman Sachs, the head of Citibank and Merrill, the five big boys, to find out what should happen to the world financial policing order. And the answer was: smash it. Summers was holding secret meetings with the big bankers to come up with a scheme to eliminate financial regulation across the planet.

It’s quite an extraordinary process. This is one memo within the whole framework of this strange and what seems to be illegal gatherings. I can tell you that it’s not against the law for the secretary of the Treasury to meet with big bankers. What you can’t do is do it in secret and run secret negotiating positions past those bankers, who have a direct financial interest in the outcome. Their financial interest was to eliminate all policing of their activities, which they did.

The memo in particular, what Summers was engineering–remember, Summers, Rubin, Geithner were the key players in eliminating financial regulation of the banking industry. They eliminated the distinction between gambling houses in the investment banks and our piggy bank banks, the commercial banks. And as you know, that led to financial implosion in the United States and worldwide.

How did it end up bringing down the world financial system just ’cause we had a problem with the United States? The answer goes back to this memo. It was an idea in which they said, look, we can’t deregulate into the United States alone; we have to deregulate across the planet. Otherwise, money will shift out of the United States into safer money harbors. So the way to change end that would be to eliminate banking regulations in every nation of the world, 156 nations in one shot.

And it was quite brilliant, the scheme, which was–and it succeeded, that is, in an awful way. We have a world financial collapse, but their plan to succeeded, the end game succeeded, which is to require any nation that wants to do trade with the United States in goods to accept our bads. If you want to sell us–if Ecuador wants to sell America bananas–and this is a real example–if Ecuador wants to sell us bananas, they have to accept in return derivatives, subprime mortgages. They have to accept synthetic collateralized debt obligations. So they’re being paid for their real assets with toxic assets.

And every nation but one signed on. A hundred and fifty-five nations agreed to a kind of form of blackmail, which is that you want to sell cars to the U.S., you want to sell, you know, orange juice to the U.S., you’re going to have to go along with deregulating your banking system, accepting our derivatives junk, our junk bonds and our junk derivatives, and opening up your sectors to Goldman Sachs and JPMorgan, so that Morgan, Citibank, and others are allowed to operate internationally. The effects, of course, have been disastrous.

And what’s important about this document, again, is not just that it tells you how the world fell to its knees and the inside process and the kind of icky revelation that, you know, as a lot of people suspected, that the bankers and the Treasury Department actually secretly put this whole business together. What’s particularly relevant this week is that Larry Summers, the center of this scheme of this end game, is Obama’s prime choice to be head of the Federal Reserve Board. So I thought that this was the time to get the document out.

NOOR: And so you can confirmed the authenticity of the memo with Pascal Lamy, the secretary-general of the World Trade Organization. What was his reaction? Can you share his reaction to the memo? And did he disclose anything to you that wasn’t previously known or published?

PALAST: Well, I actually spoke to–I traveled all over the world to confirm this. I went to Geneva, Switzerland, and I–you know, ’cause of my position as–I’m pretty well known internationally as a reporter, so I was able to speak with the director-general of the World Trade Organization himself, Pascal Lamy. He’s French. He said, oh, the WTO–’cause all this was done through the auspices of trade–the WTO is not some cabal of evil bankers meeting in a room secretly filled with cigar smoke, etc. And then I showed him the memos. So that was–yes, there was no cigar smoke, but there were secret meetings of bankers.

And his reaction was, listen, if the United States–in his wonderful French accent–if the United States doesn’t have a real democracy, then you’re going to have to file a complaint with the human rights court down the street in Geneva. That’s none of his business. It’s not his job to make America a democracy if we’re being run by bankers, which is pretty awful way of putting it.

I then went and I also spoke with a member of the cabinet at the time. Remember, these are cabinet members, Rubin and Geithner and Summers. Another member of Clinton’s cabinet when this was occurring was Joe Stiglitz, who later won the Nobel Prize in economics. He was head of the Council of economic advisers. And Stiglitz has never given me, by the way, inside documents, but he does tend to confirm the documents I show him, just to make sure I know what I’m talking about. And he said something shocking to me. He said that when he was in cabinet meetings, Summers would turn to Rubin and say–and they’re in the White House in front of the president. The president would ask them some for policy recommendations, and Summers would say to Rubin, well, what would Goldman think of this? In other words, what would Goldman Sachs think? And he did it several times, until Stiglitz finally said, don’t you think it’s inappropriate to be asking what Goldman Sachs would think of our policies? Isn’t it–it’s what happens to the American people, not what happens to Goldman Sachs. And they looked at him like he was a complete naive schmuck. You know? And so he was eventually disinvited from Clinton’s cabinet, and Summers was promoted to full secretary of the Treasury.

Now, one of the problems here: it’s more than bad that there are secret discussions between our policy chiefs and the banks determining what the policy should be. It had a terrible effect on the world economy. It decriminalized behavior by these banks. It used to be a crime for these bags to be shifting money across borders. It used to be a crime for them to sell products that weren’t products, like financial derivatives. The problem is that once these activities were decriminalized–we call it deregulating. It’s really decriminalizing previously criminal activity. Once we decriminalized the banking system, we ended up with situations, for example, where Goldman Sachs cut a secret deal for currency default swaps with the government of Greece. When that was uncovered, the Greek economy imploded. So these things have serious consequences.

By the way, even when we look at the destruction of Detroit, China signed the agreement, agreed, okay, we’ll open up our banking sector to derivatives and your toxic junk, but we want your auto parts industry in return. So we basically handed over the auto-parts industry to China. That was their deal. Two million manufacturing jobs shifted to China from the U.S., and auto-parts was a big part of it, which led to the–. One of the reasons why the city of Detroit went bankrupt despite the auto bailout is that auto parts did leave for China. So, you see, there’s direct repercussions of this type of secret connivance between our officials and banks. It’s a very dangerous business. And for Summers to have been in the middle of organizing this and coordinating this and not revealing this–they’re allowed to have these meetings, but they can’t do it in secret–it raises questions about whether this guy should be the central banker of the United States.

NOOR: And Greg Palast, we’ll certainly follow this story and see if it does have an impact on whether Summers gets that position or not.

PALAST: Well, yeah, I think it will, because I do know that they’re very nervous about his confirmation hearings, and I think that there are some–I do know that there are going to be some senators who are going to be more than happy to stick this memo to his forehead, and especially after they read parts two and three coming up at GregPalast.com. There’s going to be–I’m not done with Mr. Summers. I’ve been keeping files on this guy for about a decade and a half, because wherever there’s an economic fire, he always seems to be the guy holding the matchbook.

NOOR: Well, Greg Palast, thank you so much for joining us, and we look forward to having you on again to discuss your future reporting.