Globalization, Inequality & the Predictable Corporate Takeover of the WTO (1/2)

Our World Is Not For Sale: 2018 World Trade Organization Public Forum 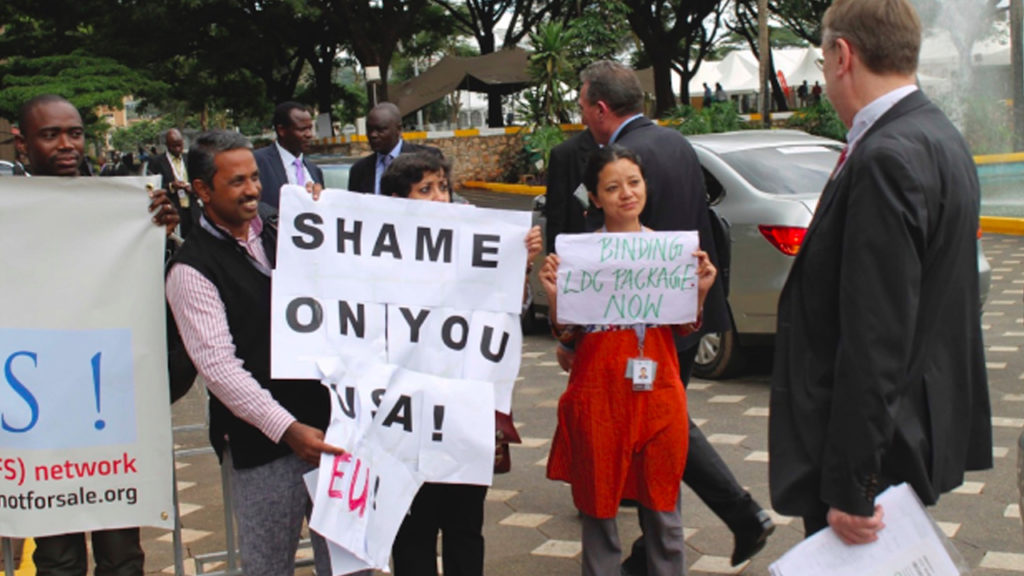 Breaking through what by nature is a complex specialized topic, a message for citizens worldwide came across loud and clear this October as representatives from South Africa’s Permanent Mission to the World Trade Organization here in Geneva and Third World Network Nepal, UNCTAD’s division on globalization and development strategies and the South North Development Monitor took the floor at the Our World is Not For Sale working session at the 2018 World Trade Organization Public Forum. That session, called The Crisis in Multilateralism, laid out a longstanding track record at the World Trade Organization, where at the behest of the world’s most powerful and wealthiest nations and corporations, the public interest at this public institution has been circumvented, and instead the WTO has been turned into a global platform that’s facilitating a vicious circle where wealth and power beget more wealth and power and an ever expanding inequality between and within countries.

The Real News releases exclusive, full length documentary footage of that working session in part two of this series. Here in part one, we present featured clips, opening with comments by Deborah James, a representative for the Center for Economic and Policy Research and the Our World Is Not For Sale network.

DEBORAH JAMES: We should debate what are the sources of poverty reduction in the world, that which is happening and that which is not happening. And now we’re seeing the negative impacts of globalization in high income countries such as mine, the United States, and this has in recent years contributed to political upheaval. But that globalization has been defended as if it were a great boost to millions of people throughout the world. So if we understand that this type of globalization has not benefited the majority of people in developing countries and we understand that now there’s a huge populist revolt because that same globalization model has not benefited the vast majority of people even in the developed countries. But at the same time, there’s been a huge increase in wealth creation and a huge increase in trade and investment flows. Where’s all the money going?

Well, it turns out that we have the answer in this year’s Trade and Development Report. It’s going to the top one percent of superstar vampire corporations who are sucking even more wealth out of the vast majority of people around the world in the Global North and the Global South and everywhere in between. And we would say that this corporate takeover is the predictable result of these firms using their wealth to intervene in the economy, to rewrite the rules through the WTO and also through bilateral and regional trade agreements, and through electing austerity-focused national governments.

VAHINI NAIDU: We all know that the benefits and costs of trade liberalization have not been shared equitably. Citizens are increasingly aware that the safety nets needed for trade adjustment are inadequate and that job losses in declining sectors are rarely compensated by growth in others. Job insecurity is on the rise. We need to fully acknowledge the role of trade in the state of affairs and not shy away from assessing the extent to which trade and trade agreements have contributed to growing inequality across the world. A measure of equity in the multilateral trading system will be the extent to which it facilitates Africa’s structural transformation and industrialization for sustainable and sustained development. For legitimacy and sustainability, these concerns need to be addressed. In this respect, we can recall the full range of the so-called implementation issues, advanced by developing countries, that was integral to the negotiating agenda in the Doha Development Round.

PRERNA BOMZAN: I would like to start by giving a brief introduction regarding the UN defined Least Developed Countries. So this category was established in 1971 by the UN General Assembly, obviously to draw special attention to these countries for more development attention. At that time, there were the only 23 LDCs, but today there are 47 LDCs. So that clearly shows that there is a major problem in the development paradigm that we are chasing. And out of the 47, 46 are WTO members. So I was checking the report of the Subcommittee on LDCs of last year, October 2017, and there it says that the LDCs’ share of world merchandise exports, it remains under one percent and its share in world exports of goods and commercial services, it stood at .91 percent in 2016. And the LDCs, they continue to record a sizable trade deficit, which reached 9.9 billion U.S. dollars in 2016, which represents a nine fold increase compared to the trade deficit in 2005, a decade back.

Right now, in the Doha rounds, the LDC package which we talk about, that is duty free, quota free market access, the rules of origin and the services waiver, that we think as the development aspect of the Doha round. And we’ve been consistently calling for the early harvest of the LDC package, but right now there hasn’t been any movement in the negotiations.

RICHARD KOZUL-WRIGHT: And by hyper-globalization, we basically see three distinct features from the earlier period of globalization from the end of the Second World War. Clearly, there’s an ideological component with the rise of neoliberalism as the dominant economic narrative. Neoliberalism, though, is not simply about more markets. That’s a very basic kind of philosophical failure in a lot of the discussion of neoliberalism. Neoliberalism is fundamentally about creating a set of rules that allow business to do what it wants, how it wants, where it wants, unencumbered by the actions of governments and other potentially distortionary elements, democracy, trade unions, other things that might get in the way of business doing what it wants, how it wants, where it wants.

And because people like, particularly neoliberals who haven’t read him, like to go back to Adam Smith at this point as a kind of father figure of the neoliberal tradition, which he wasn’t, of course, and Smith had two very important insights about what we would call a rules-based system. Smith recognized, particularly in The Theory of Moral Sentiments, that a rules-based system didn’t just depend on the details of the rules themselves, but the trust that people had in those rules and whether people trusted both the rules and the execution of those rules, that was a key feature of Smith’s understanding of a healthy political economy. And one of the things that we track, particularly since the financial crisis although there were signs of it before of course, was the removal of trust from political systems both at the national level, but I think also the international level, too.

At the national level it’s pretty obvious why this has happened. The response to the financial crisis was, essentially, how do we save the banks. And we saved the banks both by handing out very large amounts of taxpayers’ money, which is how the banking system survived and recovered after the crisis, and then shifting the burden of the consequences of that action onto the vast majority of people through policies of economic austerity. And that combination of saving the institutions that caused the problems in the first instance and then shifting the burden onto your average citizen has clearly removed most people’s sense of trust in the institutions ultimately whose job it is to provide for the welfare of its citizenry.

RAVI KANTH: For the past 20 years, I have been covering every development that has been happening in this organization on a daily basis for several publications. So I’m just going to reflect about the processes that take place here which you don’t hear in these public forum discussions. I’ll start off with a small statement, namely just to indicate what this organization is all about. Here is the Director General, who when he came power sometime in September 2013, from that period, September to December 2013, he worked tirelessly on an issue called the Trade Facilitation Agreement. In fact, this hall used to be filled with the Trade Facilitation negotiators. He worked so hard for the next three months on an issue which was not a core issue of the Doha Work Program. This was one of the most controversial issues.

In fact, before he began the Director General, he was Brazil’s trade ambassador to the WTO. In one of the Trade Negotiations Committee meetings, he had actually said that the Trade Facilitation Agreement is a market access agreement and that countries like Brazil are not getting any commensurate return for what they are going to agree to in trade facilitation. That was the man who later became the Director General, and who worked hard to get this trade facilitation agreement while completely ignoring the real issues of the Doha Development Agenda, whether it’s the agriculture or implementation issues or special and differential treatment improvements, or for that matter, the LDC package.

I mean, ultimately, the face of this organization is sort of tested and measured on what it could do to the poorest of the poor countries. And the LDC package has been laying heavy on this organization since 2005 Hong Kong Ministerial Declaration in Hong Kong. There are different stages, but suffice to conclude here, the Director General who worked on the trade facilitation agreement because it was an agreement sought most by the United States and the European Union and several other countries, of what are called the Colorado Group. The Colorado Group was formed in 1996, and he was the man who has ignored the developmental issues which his own country had brought into full play starting from 2003. This exposes the kind happenings here. This organization, I’m convinced from my writings and from my day to day reports, it does not work for the developing countries, it does not work for the poorest countries, and if at all it works, it works at the diktats of the big boys.

DEBORAH JAMES: I hope that this session, even though I’m sorry that we didn’t have time for questions and discussion, has provided some more serious thought and more serious reflection about the deeper issues that are underlying the current crisis in the multilateral trading system, so that we can actually talk about solutions that will work for people and the planet and not just continue to entrench corporate interests in the WTO and other multilateral spaces.