The Egyptian army's decision to close the Rafah crossing, Gaza's only terminal to the outside world, and the demolishing of the underground tunnels along the border added more hardships and suffering to Gazans

The Egyptian army's decision to close the Rafah crossing, Gaza's only terminal to the outside world, and the demolishing of the underground tunnels along the border added more hardships and suffering to Gazans 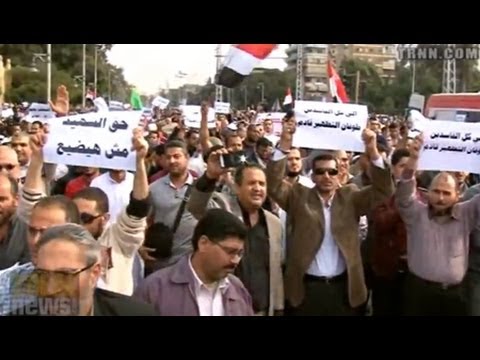 YOUSEF ALHELOU, TRNN CORRESPONDENT: On 3 July, the Egyptian military toppled Mohamed Morsi, the first elected president, saying it had acted in the name of millions of Egyptians who believed that Morsi had warped the democratic process and abused his power.

People in the Palestinian enclave of Gaza have been monitoring the unfolding developments in neighboring Egypt. Residents in the tiny coastal strip were glued to TV and radio broadcasts from Egypt, which is the largest, most populated, and most powerful Arab country. Reactions in Gaza remain conflicted. People here do not know yet whether they should mourn or celebrate the ouster of President Mohammad Morsi.

GAZA RESIDENT (VOICEOVER TRANSL.): I have been following and watching news coming from Egypt constantly on TV and social media. Egypt represents the Arab world for Palestinians, so anything happens in Egypts affects us, especially for us in Gaza who rely on the Rafah crossing to get in and out.

GAZA RESIDENT: What happened in Egypt was not a kind of military coup; rather, it was a process of democratic transfer. I understand very well that Mr. Morsi has come through the ballot box, but he stayed one year without serving his country. That’s why they rebelled against him. Sadly speaking, this reflected negatively on Palestinians, especially Gazans living in this narrow enclave, because, you know, we are deeply connected with Egypt. But I’m sure that the Egyptian army won’t let us down.

GAZA RESIDENT: What happened in Egypt is a military coup. Morsi was the freely elected president. After they deposed him, they closed the Rafah crossing and they closed the tunnels. Of course, this is a kind of collective punishment. Why we are being punished collectively?

ALHELOU: Following the overthrow of ousted Egyptian president Mohamed Morsi, the Egyptian army has stepped up its presence along the border with Gaza, and it closed off the Rafah border crossing until further notice while continuing their effort to destroy the tunnels that Gazans dug in order to circumvent the suffocating blockade imposed on them by Israel.

In recent weeks, Egyptian forces have cracked down on these tunnels, citing concerns that militant groups were operating in the area. The crackdown has resulted in shortages of certain key goods, including fuel and cement.

OMAR SHABAN, ECONOMIC EXPERT/DIRECTOR OF PALTHINK FOR STRATEGIC STUDIES: The situation in Gaza is about to collapse. Since three weeks, Gaza society, which is inhabited by 1.6 million people, was denied access to fuel and other inputs, especially construction material. Gaza was dependent on the tunnel to bring all these commodities, which helped and contributed greatly to create jobs in the Gaza Strip. We have to remember in these circumstances that Israel is still considered by international law as occupying power to the Gaza Strip, so Israel has the responsibility to take care of the Gaza people, as they are under its occupation. Palestinian Authority has to work hard with international community, with Egyptian government, to relieve the siege, to remove this [incompr.] siege on Gaza and to allow more material to come in.

ALHELOU: Meanwhile, the closure of the Rafah crossing, which is Gaza’s only gateway to the outside world, has prevented thousands of people from crossing in and out, leaving many stranded, including patients, students, and people who hold visas and citizenships to other countries.

Dozens of Palestinians, including many families, are also being held at Cairo International Airport. They are told by the authorities to either return to the countries where they flew in from at their own expense, or suffer waiting at the airport’s deportation holding area until the Rafah crossing opens. Over 900 Palestinian pilgrims who have performed Umrah are currently stuck in Saudi Arabia, worried if they flew to Cairo they would be held indefinitely in the airport’s deportation rooms until Egypt reopens the Rafah terminal.

HAIDAR EID, POLITICAL ANALYST: I think every single time something serious takes place in Cairo, the Palestinians of Gaza pay a heavy price. At the moment, the Rafah crossing is closed. Almost 90 percent of the tunnels, which are the only lifeline Gaza has to the external world, are closed. And this is a form of collective punishment that we don’t expect from our brothers in Egypt. What is needed right now from the Egyptian authority is to open the Rafah crossing permanently and unconditionally 24/7. Otherwise, this would be considered a war crime against the people of Gaza.

ALHELOU: Hamas officials in Gaza have been quiet as they try to adjust to the new political reality in Egypt and the fall of the Muslim Brotherhood, whom they consider to be their ideological ally, while other factions described what happened as a victory for the demands of the Egyptian people.

IHAB GHUSSAIN, SPOKESPERSON OF HAMAS RUN GAZA GOVERNMENT: Whenever there is a problem on the Egyptian side, we have problems in Gaza. The first effect is the closure of the Rafah border and escalation of the ongoing efforts to destroy the tunnels, which are the only way the people here can bring in what Gaza needs of goods and material supplies to survive on under Israeli siege and closure of all the border crossings. We hope the Chaos in Egypt will end and the Rafah border will open again, because it’s the only way the Palestinians in Gaza can connect with the rest of the world.

JAMEEL MEZHER, POPULAR FRONT FOR THE LIBERATION OF PALESTINE (VOICEOVER TRANSL.): What happened in Egypt is a victory for the will of the Palestinian people, and it is the democratic choice for the Egyptian people. And we think that in the long run this will not have a negative impact on the Palestinians and Gazans in particular. Egypt has been always supportive of the Palestinian cause. Therefore we are certain that the new leadership in Egypt will not abandon our cause and our people in Gaza who have been suffering under the Israeli siege. And if the closure of the Rafah crossing continues, then this will cause disastrous consequences on many levels.

ALHELOU: Relations with Egypt are critical to Gaza. Gaza shares a border with Egypt and shares important cultural ties with its larger neighbor, which had controlled the seaside strip before it was captured by Israel in the 1967 Mideast war. The city of Rafah was divided during that war. The border now passes in the middle of the city.

HANI AL-BASSOS, ISLAMIC UNIVERSITY OF GAZA: I think the chaotic situation in Egypt will affect the people in the Gaza strip in a bad way. We have begun witnessing such a difficult situation, shortage in everything in the Gaza Strip. I think the political situation somehow would in the near future affect even the relationship between the people in the Gaza Strip and Palestinians in general with the Egyptian people because of the media coverage, which had been badly, negatively affected the whole situation in Gaza.

ALHELOU: This situation reveals again the reality of the situation in the Gaza Strip under the policy of the ongoing Israeli blockade, collective punishment, and the closure of all border crossings by Israeli authorities for more than seven years. The closure denies 1.7 million Palestinians of their basic rights and needs, as well as the freedom of movement to and from Gaza.

Because of the siege laid by Israel, Egypt is the primary gateway for Gazans to leave the territory, and also a key supplier of goods, ranging from fuel to building materials and consumer goods. Much of it comes through underground tunnels along the border.

Because of the interruption in the trade with Egypt, Gazans must buy imported petrol from Israel for twice the price.

The Palestinians of Gaza hope that any new leadership in Egypt would choose to end the suffering of the Palestinians and treat them with respect and dignity like other nationalities who cross into and out of Egypt and keep the Rafah crossing open 24/7.

Yousef Alhelou for The Real News Network in Gaza.