War and ‘Cash for Trash’

Gareth Porter discusses US hawkishness in the Caucasus with Real News Network's Senior Editor Paul Jay. As the US and NATO pursue their containment policy, the threat of a new cold war emerges.

Gareth Porter discusses US hawkishness in the Caucasus with Real News Network's Senior Editor Paul Jay. As the US and NATO pursue their containment policy, the threat of a new cold war emerges.

Gareth Porter on the state of the Empire 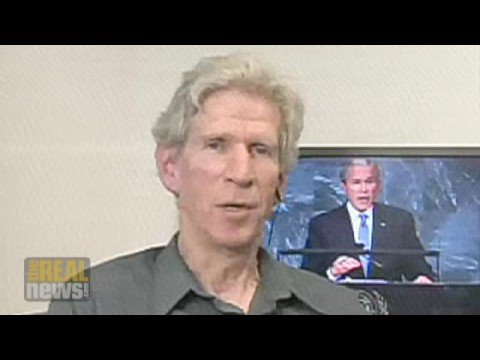 PAUL JAY, SENIOR EDITOR: Welcome back to the next section of our series of interviews with Gareth Porter on George Bush’s speech to the United Nations. Gareth is a historian and investigative journalist based in Washington, DC. Gareth, here’s George Bush at the United Nations on the state of the American economy.

GEORGE W. BUSH, US PRESIDENT: In recent weeks we have taken bold steps to prevent a severe disruption of the American economy, which would have a devastating effect on other economies around the world. We promoted stability in the markets by preventing the disorderly failure of major companies. The Federal Reserve has injected urgently needed liquidity into the system. And last week I announced a decisive action by the federal government to address the root cause of much of the instability in our financial markets by purchasing illiquid assets that are weighing down balance sheets and restricting the flow of credit.

So, Gareth, in discussing the geopolitical implications for America, empire, and foreign policy of the coming recession, and the severity of the economic crisis, how does that affect US policy vis-à-vis Georgia/Russia and some of the other areas we’ve been talking about?

GARETH PORTER, INVESTIGATIVE JOURNALIST AND HISTORIAN: I think it affects everything. I mean, the meltdown of the US financial system, which is far more serious, far worse than anyone might have guessed, certainly in the United States, and I suspect abroad as well, that has to have a very, very powerful impact on the expectations and the attitudes of other major powers, the Russians, the Chinese particularly. I believe that they will regard increasingly the United States as the sick man of the world economy, an economy that is in far worse shape than they realize and one that they cannot really count on to provide the kind of leadership in the world economy—.

JAY: Given that China, and to some extent Russia, have been financing this economy and hold billions of American dollars, that’s a pretty big statement.

PORTER: Well, I think it is a very important point. I suspect that it will certainly cause the Chinese, and the Japanese particularly—the other major economic holder of American debt—to be much more willing to suggest to the United States that it has to be more responsible about its spending habits, just basically the way in which it spends recklessly and is ruining the dollar to a degree that cannot be good for these countries’ holdings of US debt.

JAY: But is further militarization or military adventures a way to partially stimulate or paper over the problem? Or will it exaggerate it?

PORTER: Well, it’s certainly going to exaggerate it. I mean, one has to realize that the $800 billion bailout, as it’s been called, which is really probably an [$800 billion to $1.3 trillion] bailout, is really on the same level, in the same category, as the annual defense budget of the United States, which is in itself a kind of bailout of the military-industrial complex of the United States. It has the same moral hazard to it, the same effect of continuing to encourage a continuation of the same policies which are causing, you know, more and more drain on the US economy. So, you know, it has the same sort of serious effect on the economy as the military adventures of the United States, which have blown up the defense budget and which have drained off hundreds of billions of dollars every year which are needed in other parts of the US economy.

JAY: If this continues to unravel the economy and if the recession gets more and more profound, does that make military adventures more or less likely? Or does it have any effect on it?

PORTER: Oh, I think it makes it less likely. There’s no doubt that this is going to be felt in Congress. You know, whether they are capable politically of actually pulling the plug on existing military adventures is another question. But in the future, you know, it certainly is going to have a significant impact on the choices as they look to the US Congress and to political leaders. I think it’s bound to have a sobering effect, just as the effects of the Vietnam War, the economic effects of the Vietnam War, the financial effects of that war, had a sobering effect on the US military and its political allies in the decade that followed Vietnam. It didn’t last long enough, but it did certainly have a sobering effect.

JAY: Certainly China and Russia have a lot to lose if the American economy continues to spiral out of control. Russia and China are going to have to try to help the Americans, don’t you think?

PORTER: That’s absolutely true. And at the same time, of course, the Russians are going to be encouraged by what they see as the crippling of the US economically to be basically more proactive and more aggressive in pursuing their power interests. No question about that. I mean, you know, they look back at the period of the Yeltsin administration as a period when Russia was sick and weak and when the United States could basically have its way with Russia. And they now, I think, feel that they are in a very different period of history, where the United States is much weaker in relation to Russia and Russia’s much stronger. So they’re going to take advantage of that in ways that in some cases may not be particularly responsible, I’m afraid, and that’s going to be one of the consequences of this situation.

JAY: When you look at this jigsaw puzzle, which is very interconnected, how does the economic crisis and the various strategic weaknesses of American policy, how does all this come together when one looks at US policy towards Iran? There’s been months and months of talk about a possible attack on Iran. Where do you think we’re at now in this?

PORTER: Well, that’s very interesting too. No question that the combination of the financial meltdown and particularly [the] situation in Afghanistan, which they have been coming to realize over the past year or so, is really coming into a crisis. Both of those factors have undoubtedly pushed the Bush administration away from a confrontation with Iran. I think one can see an almost 1:1 correlation there between the increasing worry about Afghanistan on one hand and the lowering of the rhetoric, ultimately at least, on Iran on the other.

JAY: In the next segment of our interview, let’s take one look at McCain and Obama and what the world and the empire might look like with either one of them as president. Please join us for the next and final segment in our series of interviews with Gareth Porter.