French Unions & Students Mobilize Against Reforms: Another May ’68?

50 years after France's legendary May 1968, which almost toppled the government, unions and students are again mobilizing against the government. However, while the establishment celebrates May '68, its criticizes today's protest movement, says Le Monde Diplomatique's Renaud Lambert

50 years after France's legendary May 1968, which almost toppled the government, unions and students are again mobilizing against the government. However, while the establishment celebrates May '68, its criticizes today's protest movement, says Le Monde Diplomatique's Renaud Lambert 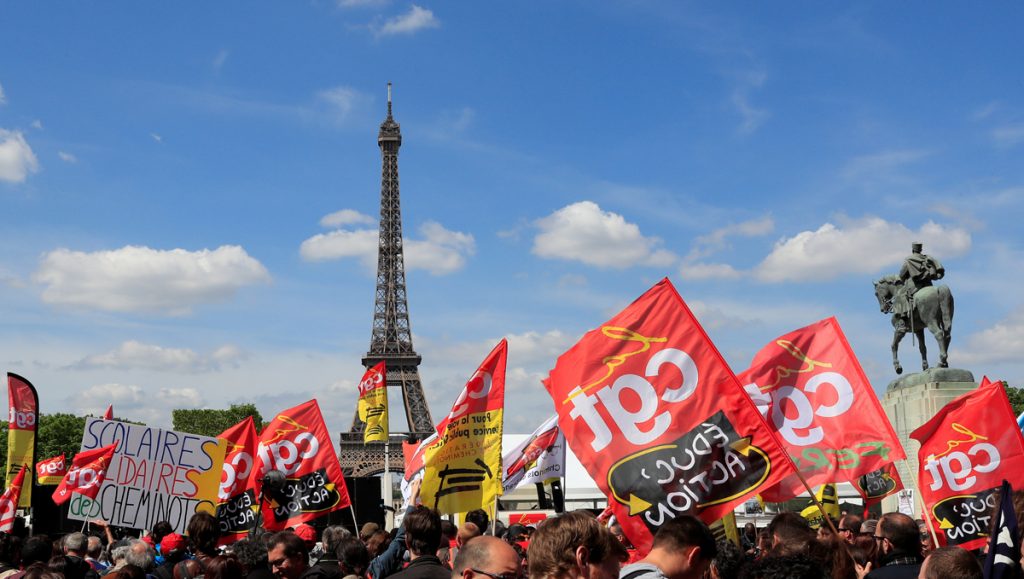 International Labor Day, also known as May Day, took place almost everywhere in the world on May 1, except in the United States. One country where May 1 has special significance this year was France. The reason is that French unions and student organizations are mobilizing against the neoliberal reforms of President Emmanuel Macron. Also, this May marks the 50th anniversary of May 1968, when students and workers in France almost toppled the government of then-president Charles de Gaulle.

Joining me from Paris to take a closer look at the resistance to President Macron’s neoliberal reforms is Renaud Lambert. Renaud is an editor with the monthly newspaper Le Monde diplomatic. Thanks for joining us today, Renaud.

GREG WILPERT: So first, give us a brief overview of what happened in France this May 1. Who took to the streets, and what were the issues that they were raising during the protests?

RENAUD LAMBERT: Well, like you said, May 1 is a traditional day to celebrate labor in France, as in many countries, obviously. But it was also an occasion to protest the neoliberal agenda put forward by Emmanuel Macron, the new president. It happens that since he was elected, Emmanuel Macron has implemented the traditional neoliberal strategy to impose structural reform. I think it’s worth remembering that this strategy was put forward by Labour leader, a Labour leader in New Zealand when he tried to advise other leaders aiming to implement neoliberal counterrevolutions.

This is what he said. He said, do not try to advance one step at a time. Define your objectives clearly, and move towards them by quantum leaps. Otherwise the interest groups will have time to mobilise and drag you down. Don’t stop until you have completed the program. Opponent’s fire is much less accurate if they have to shoot at a rapidly moving target.

So this is the strategy, to set as many parts of society on fire as possible. So very early on, Macron passed a reform bill. In September, last September, he announced that he would, I quote, “transform the public railway company.” Obviously with a view to preparing the deregulation of the sector that is required by EU, by the EU. In February of this year he went further, suggesting that he would scrap the special labor regulation for railway workers. And he also promised the same month that he was going to do the same with civil servants, adding that he would lay off more than 100000 of them. And in February as well, a bill to transform and in fact reduce access to university was discussed at the Senate.

So this is what we have, is a government hoping to divide people by setting fires to very different parts of society, and saying to the different parts of society, well, you don’t need to pay attention to what we’re doing to the rest of society. And in front of that you have people realising that what is happening to them is this is the same as what is happening to railway workers, students, and that is a very specific type of society that is being attempted to be built in France.

So all these people took to the street on May 1, and they’ve been called to take to the streets again tomorrow, Saturday the 5th, and, and there are many other demonstrations planned in the near future in France.

GREG WILPERT: So given that these are very diverse issues that he’s tackling, as you say, all at the same time, and so then there are also many different movements that are trying to resist these changes, such as students and unions. Are they coming together as a kind of united front against Macron? I mean, that’s one of the things you could expect, perhaps, even though these are many different issues at the same time. But perhaps it will unite everyone at the same time. On the other hand, I’ve been reading that in French government media, really, about the union movement, for example, is very divided between the CGT, which is more communist-affiliated, and the more centrist CFDT. Is this true? And to what extent is this a problem for resisting Macron’s reforms?

RENAUD LAMBERT: Well, it is true that there is a high degree of disunity in the labor movement, in the trade union movement to start with. And in fairness, no one really expect CFDT, more moderate trade union, to put up any kind of a fight against neoliberal reforms at this stage. They’ve just suffered a defeat in another, yet, labor conflict at Air France recently, CFDT. But I think another environment where you see a lack of unity is between the trade union movement and traditional political forces. And I think this is related to the fact that the French left in general is undergoing a large process of reorganization. Cards are being redistributed with the collapse of the Socialist Party, the rise of new parties, like for instance France [inaudible], but none has reached a sufficient level of hegemony to take the lead of the movement.

So you know, there are struggles being fought within the left and within the labor movement. Obviously I’m not saying this is good. This would be better if we had a higher level of unity. And obviously if this lack of unity was to to carry on, Macron would be the definite winner. But this is being fought at the moment. And there are hopeful signs, you know, in terms of demonstrations. There have been, there have been different, different types of demonstrations organized by different sectors. And we are, it seems, arriving at the possibility of demonstrations that will unite all sectors of the labour movement.

RENAUD LAMBERT: Well, it’s a, it’s gonna be a difficult struggle. I think we are undergoing something that the U.S. is, the U.S. underwent in 1981, I think, when Reagan fought against airline traffic controllers, you know. And it was a massive symbolic fight to crush the labor movement. It happened as well in the UK when in 1984 manga culture fought against the miners to crush the labour movement in France. It so happens that trade unions are still strong, you know, but they’re particularly strong in the railway sector.

So the fight is being carried out at the moment is not only a fight against, you know, these particular reforms, it’s a fight in order to ensure that we still have the possibility of fighting, you know. And I think it’s quite important that people are saying that beyond specific targets, railway, public services, you know, it’s a type of society that’s been, that is being attacked. And Macron is seen, I think, more and more as remote, is often compared to a monarch, which is not a good thing in France. And up to this stage, a majority of the people are in favour of the labor movement. You know, they don’t like strikes. They are annoying, I guess. People are trying to go from A to B. But people, you know, are in support of this movement to defend, to uphold a certain conception of civil services.

And Macron keeps saying that, you know, he’s just doing what he promised he was going to do. He’s not. He doesn’t have a mandate for this. You know, he was not elected because of his program. He was elected because he was faced with Marine Le Pen, who is the far right candidate, you know. And that’s his only legitimacy.

GREG WILPERT: Finally, everyone is making a comparison now between May 2018 and May 1968, exactly 50 years ago. What was your take on these comparisons? How different are these two Mays?

RENAUD LAMBERT: Yeah. It was quite surprising to see recently the Financial Times running a n op-ed suggesting that Macron was the embodiment of the spirit of 1968. And you know, and it’s true that a lot of media are running comparisons between the two Mays, and most of them, you know, 1968 has a massive advantage. It’s locked safely in the past. Rebellion is always something that can be celebrated, you know, provided that it allows power to suggest that society has changed. That the revolution has happened, and that nowadays we need to keep things the way they are. In such a way that, paradoxically, you see official France celebrating May ’68, and criticizing students who are taking to the streets, you know, at the moment.

1968 was the largest labor movement in French history, and we are still far from this, but you can definitely see, you know, the fact that the, the hope for a different society is still alive in French universities. And if cops keep beating up students who are, you know, trying to think about this in their university, no one knows what might happen.

GREG WILPERT: OK, well, we’ll leave it there for now. I was speaking to Renaud Lambert, editor of Le Monde diplomatic. Thanks again, Renaud, for having joined us today.