France’s President Macron Tells Africans to Just ‘Move on’ After a Century of Murderous Colonialism (Pt. 1/3)

France's neoliberal President Emmanuel Macron has repeatedly told people in Nigeria, Algeria, and beyond to just "move on" after a century of murderous colonialism. Activist Baba Aye speaks with TRNN's Ben Norton about the ongoing harms of imperialism and neo-colonialism in Africa

France's neoliberal President Emmanuel Macron has repeatedly told people in Nigeria, Algeria, and beyond to just "move on" after a century of murderous colonialism. Activist Baba Aye speaks with TRNN's Ben Norton about the ongoing harms of imperialism and neo-colonialism in Africa 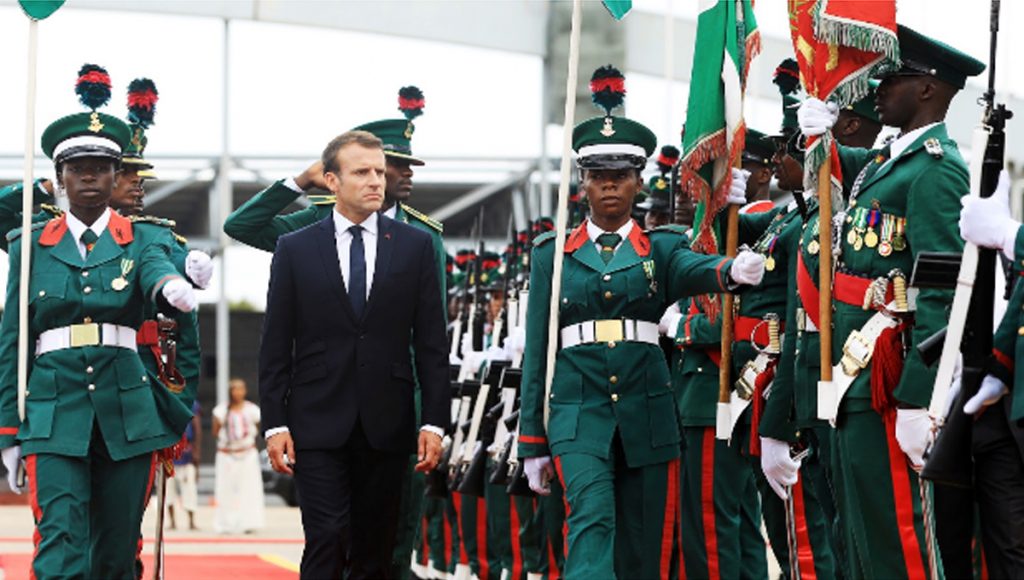 France’s centrist president Emmanuel Macron has been called the savior of France, and even of Europe as a whole. Yet Macron also has a very long history on this point of colonial rhetoric in terms of Africa. This week, Macron took his first trip to Nigeria. And while he was there he tweeted, quote, 60 percent of the Nigerian population is aged under 25. That’s 60 percent of the population which, like me, did not witness colonization. We are the new generation. This is not unique. This kind of colonial condescension, in which Macron writes off the history of a century of European, and specifically French, colonization of Africa actually goes back much longer.

In December of 2017, Macron also visited Algeria where again he told Algerians to just move on from colonialism, as he put it. At one point a young Algerian man protested Macron, and the French president replied, saying, quote: But you never knew colonization. And then he added: Your generation must look to the future. And in fact, in one of the most scandalous moments at the G20 summit in July 2017, French president Macron claimed that the problems facing Africa are civilizational. He said, quote: The challenge of Africa, it is deeply different. It is much deeper. It is civilizational. Macron then blamed the economic problems in Africa and women for supposedly having too many children, which he claimed is destabilizing the continent.

Joining us to discuss this today is Baba Aye. Baba is the policy officer for the Health and Social Service of Public Services International a global trade union federation. He is also editor of the Socialist Worker Nigeria, and a contributing editor for the Review of African Political Economy. Thanks for joining us, Baba.

BABA AYE: Thank you for having me.

BEN NORTON: Can you respond to the most recent comments made by Macron, and specifically the legacy of French colonialism which continues to today, yet which the new French president continues to reject?

BABA AYE: I would say Macron so far is from an admixture of denseness and mischief. From, I mean, if his comments on Africa and colonialism are anything to go by. The fact that generations did not witness colonialism does not in any way remove from being either beneficiaries or victims of imperialism, which-. Of which colonialism was an important moment. But which also included an earlier moment, the moment of the transatlantic slave trade, and the current moment, which was the moment of neocolonialism. These moments of modern imperialism are closely interlinked. And for him to to say what he said, I’m sorry to say, it sounds like outright nonsense, with all due respect to the gentleman.

And I mean, this we pointed out, and I’m happy about that, in the French press. Last year, for example, when he said that it was a civilizational problem that had to do with birth rates, Liberation newspaper in France drew attention to some evidence, well-documented research by Francois Verges, for example, which showed that high birth rates are not the causes of underdevelopment, but on the contrary are actually parts of the effects of underdevelopment. And in that work Francois also pointed out that it is important to take note of the role of imperialism in all this.

And you see, part of-. When I said there’s a mixture of denseness and mischief, these are in several dimensions, because he doesn’t even get his facts right. Like when he was talking about in Africa, the average human has seven to eight children, it’s not only that that was not correct at the time he was saying, based on the statistics then, which puts it at around about-. The highest being a little over seven children for women, and this was specifically in Niger. But even by the end of 2017, extant data puts that now as the highest at 6. Which shows that it’s not only that he was wrong with this, but that just as much you have in Europe, in France, it will, to a lesser extent you have a tendency towards declining in birth rates. This is like South Africa, Botswana.

But more importantly is the fact that what you have taken for granted today in France and in Europe generally came about partly because of resources that were looted, you know, during colonialism. I’ll give an example. Yesterday, I mean on the 5th of July, I tweeted something about the jeopardy to the NHS. And a friend of mine in Britain with [inaudible] roots pointed out that, look, we should not forget the fact that where a good chunk of the resources that made the NHS possible 70 years ago came from. I mean, there is more than abundant evidence of the fact that even when you had the post-war arrangement that went along with the establishment of the, of the welfare state across Europe and North America, you still had the most rampant form of primitive pillage of natural resources from all parts of Africa to service the industrial machine of Europe.

I was, I mean, in London [inaudible] train station celebrating the 150 years of its existence. This was when Britain, was, [had] colonies. So when people like Macron come up with the, the rather insane argument that because this generation did not witness colonialism-. I mean, this generation is still witnessing the third moment of imperialism, which is neocolonialism, and in which France, Britain, the U.S. dictates the terms, the Washington Consensus, whose Washington consensus, through the Bretton Woods institutions. It has been clever by [half]. That’s the part where I say that, I mean, there’s also an element of mischief in it.

But for him this rhetoric is part of the narrative for a second scramble for Africa. It’s not accidental that you had Mali in Africa, where you have, I mean, [inaudible] where you have uranium deposits, which is useful for the nuclear reactors in France. Was on his first trip out [south of] France after becoming president. His rhetoric is aimed at an ideological street now, for the younger generation in Africa to look at the other side while, as they donate it to the bosses from Europe, they will forget the underdevelopment of Africa. And as I pointed out, even the legacies that have been suffered are not even only just from colonialism, which is, I mean, not with [inaudible] to it.

It’s quite interesting that, for example, up to the end of last century, families of slave owners who were deemed to have suffered economic consequences by the abolition of the slave trade by Britain which was the largest slave trade income in the 19th century before the police were paid money as compensation when the abolition took place. It was 20 million pounds. By todays awards, that is some 16.5 billion pounds. The slaves who were uprooted from their lands, many of whom died in the middle passage, not one, not one of them, or of the children or children’s children, benefited a dime in compensation for not only being plucked out from their land but who worked in the fields to enrich, you know, the merchants in Liverpool. And subsequently their children continue to be hewers of wood and fetchers of water. Not one was paid a dime in compensation. Less than 3000 families benefited from 16.5 billion pounds. And this was paid for well over a century-. At the time this was, that was like 40 percent of the entire British Treasury.

And it’s also not surprising that, you see, the 1 percent, they did know each other, they are one and the same, really. These include families of, I mean, the former prime ministers, like Gladstone from an earlier era. And even David Cameron, you know. So if someone still thinks that the past does not matter because of the supposed today, which is also not as blemish-free as that narrative tries to make it appear to be, then he’s not only being economical with the truth. He’s being very unfair, and he’s doing exactly what was done when the civilizational mission of Europe in Africa was declared, but while really what Europe came for was to pillage and plunder the resources of Africa for that the development of capitalism in the global-. In Europe as the métropole for capitalist development at the time.

But we’re going to take a brief pause in our conversation here. I’m Ben Norton at The Real News. Joined by Baba Aye, who is the policy officer for the Health and Social Sector of Public Services International. We’ll continue this discussion in the next part.