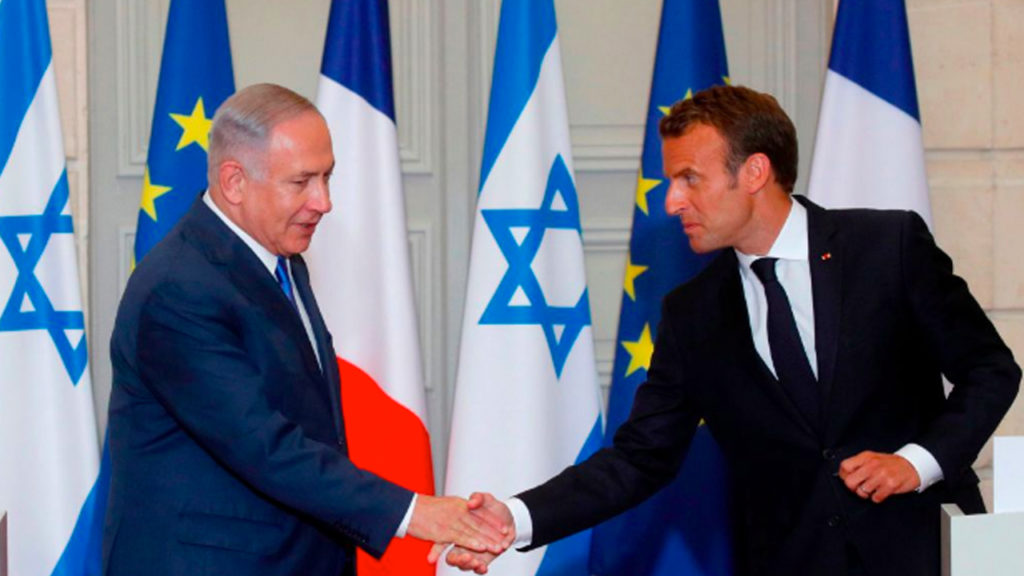 Following an antisemitic incident in which Yellow Vest protesters in France accosted Jewish professor Alain Finkelkraut, calling him a “dirty Zionist,” France’s president Emmanuel Macron seized the opportunity to lash out against Yellow Vest protests, which have been destabilizing his administration. He also used the incident to strengthen his ties with the right wing government in Israel. Upon addressing the Council of French Jewish Institutions, Macron made the following comment.

EMMANUEL MACRON: Anti-Zionism is one of the modern forms of antisemitism. This is why I’m confirming that France, who, as you reminded us, endorsed with its European partners last December, will put forward the definition of antisemitism as drawn by the International Holocaust Remembrance Alliance.

GREG WILPERT: Macron does not seem to know, or perhaps pretends not to know, that anti-Zionism is as old as Zionism itself. It started in the late 19th century when it was, as it still is today, a mostly Jewish movement that rejects the idea that immigration and colonialism are the answer to racism towards Jews. In other words, anti-Zionism has been from the very start a Jewish movement to combat antisemitism.

Joining me now to discuss Macron’s anti-Zionism legislation is Sonia Fayman. She is a French Jew of both European and Arabic descent who is a member of the organization Union of French Jews for Peace, or UJFP, and is also of the International Jewish anti-Zionist network IJAN. Thanks for joining us today, Sonia.

GREG WILPERT: In the election, the presidential election, Macron’s main opponent was Marine Le Pen, who represents a party with a long tradition of antisemitism. But at the same time, she’s also a pro-Israel–that is, her party is also a pro-Israeli party, and Le Pen herself is pro-Zionist. Do you think that Macron is equating anti-Zionism and antisemitism because he’s trying to get the votes of the French people on the far right, who might hate Jews but love the state of Israel?

SONIA FAYMAN: Well, yes. I think, obviously, this equation he’s making is related to the competition he’s engaged in with Marine Le Pen for the next elections, presidential elections. And while it’s true that this party has a long history of antisemitism, but Marine Le Pen, contrary to her father, has been trying to claim her party is not antisemitic and she is a friend of Israel. That’s right.

Well, so Macron’s denounciation of antisemitism and anti-Zionism as the new form of anti-Semitism aims at winning the favor of Zionists and Israel. But at the same time, and this expression, at the same time, is one of his favorites. He can be courting the far right, since Marine Le Pen is also a [friend of Israel], both reasons are working. Everybody now knows the state of Israel has friendly relations with antisemitic parties and states led by notorious antisemites, like in Hungary, Austria, Poland, and others.

So to Macron it’s important to be in a good place within the Western alliance against so-called terrorism; that is, Iran, Hezbollah, and Palestinians. There are several reasons. But certainly, he’s trying to court people who are willing to vote for Marine Le Pen.

SONIA FAYMAN: Yes, we are very much against this definition. And it’s been some time that the IHRA is trying to pass this definition. It’s being debated in the EU. And along with the solidarity movement with Palestine, we denounced–we’ve been denouncing this attempt. And as part of EJJP, which is European Jews for a Just Peace, which is gathering several movements, several organizations, in European countries. We have been criticizing this these definitions, especially because it’s aiming at preventing people to criticize Israel and Israeli politics.

So we are taking a stand against this definition, and also against the European Jewish Association, who issued a plan to have this definition officialized in the EU. And as part of the EJJP, we support the lobby group of EJJP, which met several political representatives and EU Commission officials. And now it has sent a letter to all of them all of them taking a stand against the European Jewish Association plan. And the letter reads the plan is contrary to the fundamental right to freedom of speech, to the right of [MPs] and political parties to criticize Israel, and to support legal civil society activities putting pressure on Israel to make it comply with international law. So that’s our point on this definition, where many groups are trying to to criminalize anti-Zionism.

GREG WILPERT: Now, in legal and practical terms, what does Macron’s initiative mean? Will there be new laws to criminalize criticisms of the state of Israel in France, and will anti-Zionist organizations become outlawed?

SONIA FAYMAN: Well, first of all, we should consider what the objectives are in such a project. And there are at least three of them. First of all, it seeks to tighten the links with Iran. And I’ve been already mentioning that. Secondly, it’s a way of smearing the ongoing Gilets Jaunes movement, this movement which has been lasting since last November, where lower middle class and lower class people are protesting in the streets in Paris, and many other cities, to have justice in the tax system. And globally they want Macron to [inaudible], as they would say. They don’t want Macron anymore. And the government has been putting out a very fierce repression, police repression, during these protests.

So speaking of antisemitism and criminalizing anti-Zionism is a way–and even if they would legalize this ban, that would be a way of criminalizing, also, the Gilets Jaunes, saying that they are antisemitic. And the third reason is to leave aside other minorities like the Arabs and blacks while accusing them to be very antisemitic, with the idea–this idea they have been bringing up new antisemitism. And that notion has been proved nonscientific and groundless.

So I don’t think this legalization would happen, although there is much support for development within the government, and some powerful Zionist organizations, like [name inaudible]. They rely upon a particular guilt which is generated from World War II, during which there was this collaboration between France and Nazi Germany. And since then there is that kind of taboo about antisemitism. But furthermore, they play with that conflation between antisemitism and anti-Zionism, which is really rooted in the way Israel has been built as a state.

I want to recall historian Joseph Massad, a Palestinian historian who recalls that by the time of the foundation of the state of Israel at the end of the 40s, and beginning of the ’50s, they needed more colonization of Palestinian land. So the Zionists began to recall their colonial projects, as we say, and as anti-colonial, and the Palestinian resistance as antisemitic. And since then–and you’ve been saying that in the introduction–that since the beginning of Zionism, anti-Zionism existed as well, and that the majority of the Jewish population worldwide was mainly anti-Zionist at the beginning.

So since then, Zionists target all critics of Israel settler colonialism as anti-Zionist. They consciously conflate Israel with all Jews worldwide, even though a majority of Jews live outside Israel and are not Zionists. And through this way they can claim that condemning Israel is attacking Jews. But even within the government and Macron’s party, there are people who will clearly say that Zionism and anti-Zionism are political opinions, whereas antisemitism is a form of racism, and as so is criminalized. This point of view seems to be quite largely shared.

GREG WILPERT: OK. Well, we’re going to have to leave it there for now. I was speaking to Sonia Fayman of the organization Union of French Jews for Peace. Thanks again, Sonia, for having joined us today.