Frontline workers across the world are organizing wildcat strikes on May Day, demanding protective gear and hazard pay from companies making record profits.

Frontline workers across the world are organizing wildcat strikes on May Day, demanding protective gear and hazard pay from companies making record profits. 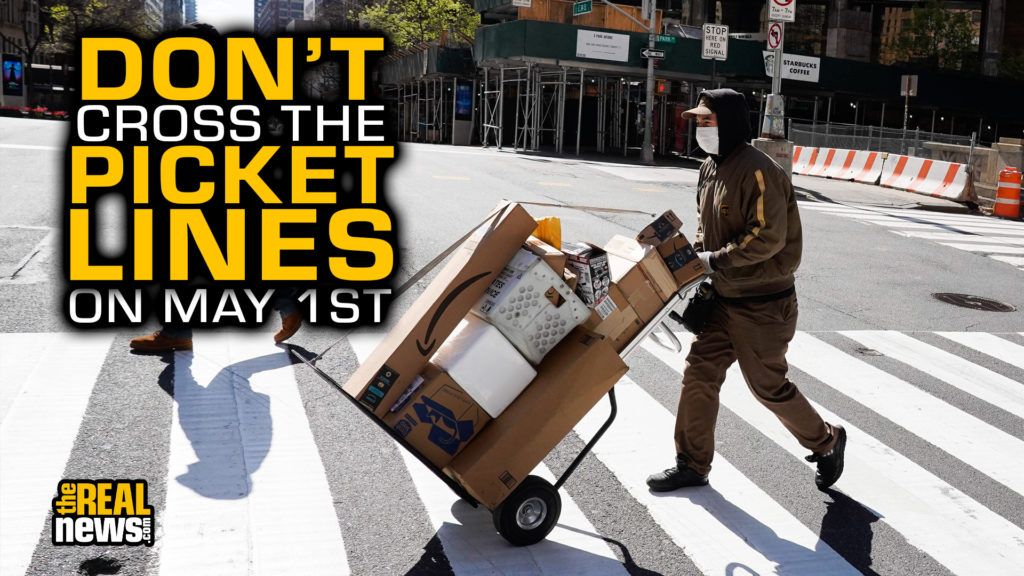 Hofsa Hassan: Another reason why we out here tonight is because Amazon is targeting specific people. We are being told to stay six feet apart. However, that rule does not apply for everyone. We’ve seen management do it right in front of us. We’ve seen safety that are supposed to keep us safe, do it. Yet we as associates are being targeted.

Jaisal Noor: That’s Hofsa Hassan, one of the dozens of Amazon workers who staged a walkout to protest unsafe working conditions and the loss of hazard pay at an Amazon warehouse in Shakopee, Minnesota on April 26th. We can expect to see more walkouts and protests leading up to big actions on Mayday or International Workers Day, which is observed in most countries except the United States. Despite its rich militant often bloody history of working class struggle that’s secured major victories like the eight hour workday. But Mayday 2020 could see the reawakening of this more radical tradition in the US as workers with Amazon, Target, Whole Foods and other retailers are holding mass sick outs and other protests to demand fair pay and workplace protections during the coronavirus pandemic.

Well now joining us to discuss this is Chris Smalls. He was fired from Amazon in March after working there for five years. Amazon said Smalls was fired for not social distancing, but his firing is widely seen as retaliation for organizing a walkout at the Staten Island Amazon warehouse where he’s worked. Chris, thanks so much for joining us again.

Chris Smalls: Oh absolutely. Anytime. Thank you for having me.

Jaisal Noor: So can you start off by talking about the workers you’ve been in touch with across the US and the world who are organizing and why? And maybe start with Hofsa Hassan. We heard a clip of her earlier. She was one of the workers that walked out in Minnesota just a few days ago. Give us the latest.

Chris Smalls: Absolutely. I spoke to her this morning and I commend her for her actions. She actually opened up our eyes to another broader issue that’s going on with the company. The company is ending their UPT policy on April 30th.

Jaisal Noor: And what is, what is UPT?

Chris Smalls: Unpaid time. Unlimited unpaid time that they were only offering during the pandemic is now coming to an end on April 30th and I believe that’s just a tactic for them to counteract the protest that we’re doing on May 1st. They kind of wanted to punish people in a sense then not giving them the option to take off any more. But we also got to think about religion. It’s Ramadan as she stated, and Amazon has a large workforce that celebrates that holiday, that religion as well. So they need to take that into consideration and they haven’t. And this tells you how much little value we are to them. They don’t care about what we have going on at home, our families, our livelihoods. They don’t care about our communities.

And she brought up a very strong argument and I’m so glad that I was able to connect with her because I stand behind her a hundred percent. And she’s standing behind me a hundred percent and we’re going to continue to work together. And this is the reason why I’m mobilizing on May 1st.

Chris Smalls: I’ve been speaking with everybody from all over the world. Even the ladies that they fired in Seattle, Emily and Mara Costa. I’ve spoken with them as well. I get emails every single day. I just got off the phone with a union from Germany. I’m in contact with a union from France. France already handled their business, but that’s just to tell you how much people are connecting and supporting the movement because we’re all in the same situation. People in the states over here nationwide, I’ve been talking to numerous employees all over the country every single day, and we’re all coming together in solidarity. We’ve been having conference calls every week to mobilize on May 1st. They are on board on what I got going on, they all for it. And collectively all these companies that you mentioned, Target, Whole Foods, Instacart, even Uber and Lyft drivers, FedEx drivers, they all decided to speak up on this topic which is the pandemic and that the fact that these companies are not protecting us and we decided to all join forces.

We’re going to stand together on May 1st. We’re going to come together and we’re going to protest in front of certain locations throughout the country, nationwide and we’re going to release also a press release statement of all our demands. All the demands that the CEOs of all these companies need to hear and understand will be released to the public as well. So they understand the reason why we are protesting. We don’t want to do this. We’re being forced to do this. We’re not protected, we’re not paid correctly meaning there is no paid sick time or hazard pay. You have to test positive to get quarantine pay. It’s not fair to us and this is the reason why we got to do what we have to do. As you said this, this is a 20th century type of revolution and we’re just trying to continue that tradition and do it peacefully as well.

Jaisal Noor: And so we know that workers have tested positive in over 130 Amazon warehouses. You warned about this in March. That was one of the reasons that you were organizing, speaking out. And so weeks have passed, five or six weeks have passed since you were terminated. Has Amazon or any of these companies addressed these dangers?

Chris Smalls: Well, to be honest with you, it hasn’t even been a month yet. It’s only been about three weeks. That’s the scary thing about it. Since I’ve been terminated, it’s been what you can say a skyrocket cases that have been happening throughout the nation. And this is what I was warning. You’re absolutely right. I tried to prevent this from happening because I know from being with the company since 2015, I know what’s entitled when it comes to operations inside these warehouses. You can’t avoid coming, interacting with somebody that may test positive, whether it’s in passing, whether it’s in and out the entrance of the building. Whether it’s in and out the entrance of a restroom. Whether it’s sharing a microwave in the break room.

You got to take all of that into consideration. The simple fact that you cannot stop the spread of the virus once it’s in these type of facilities. It’s not the buildings that hold the virus, it’s the people that’s spreading it. They want to clean up and triple down on cleaning, whatever they say to the public. They want to continue implementing safety guidelines. They can do all of that, but everything they’re doing is very reactive. It was very late to the game and it’s not working. The only way you stop the spread of this virus is stop spreading it out to people. Stop having people come to work. That’s the only option I see that’s going to work.

Chris Smalls: Until we get protection that we need, because consumers and employees should be on the same side. We are doing a service for the consumers, but if we’re not healthy, we’re doing a disservice. Meaning we’re bringing this virus back to the communities. So we need to stay together in this aspect. And for the consumers, don’t purchase anything from these type of companies until they protect us. By doing that, you’re standing with us, you’re standing with your loved ones. A lot of these people that support these companies are family members like stay at home mothers and wives, teachers, whoever’s home right now, they support delivery services. And there’s no problem with that but obviously the major problem is that they failed to protect us, which mean they ultimately failed to protect their communities because we live in these communities. We’re in the trenches.

And these CEO’s, the spokespeople for Amazon are the CEOs of billionaires, executives, they’re not in the trenches with us. They are part of a different type of lifestyle that doesn’t relate to us and we need to understand that if you guys are really standing with us, the only way you can support us at this moment is not support these companies until they meet our demands.

Jaisal Noor: All right, Chris Smalls, thanks so much for joining us.

Jaisal Noor: I believe you’ll be joining us on May Day at five o’clock Eastern live on our broadcast and so we’ll make sure to link to that and link to all of our interviews with you. I’ve had you on every couple of weeks now giving us an update on what workers are doing. We appreciate the work you’re doing. Thank you.

Jaisal Noor: And thank you for joining us at the Real News network.