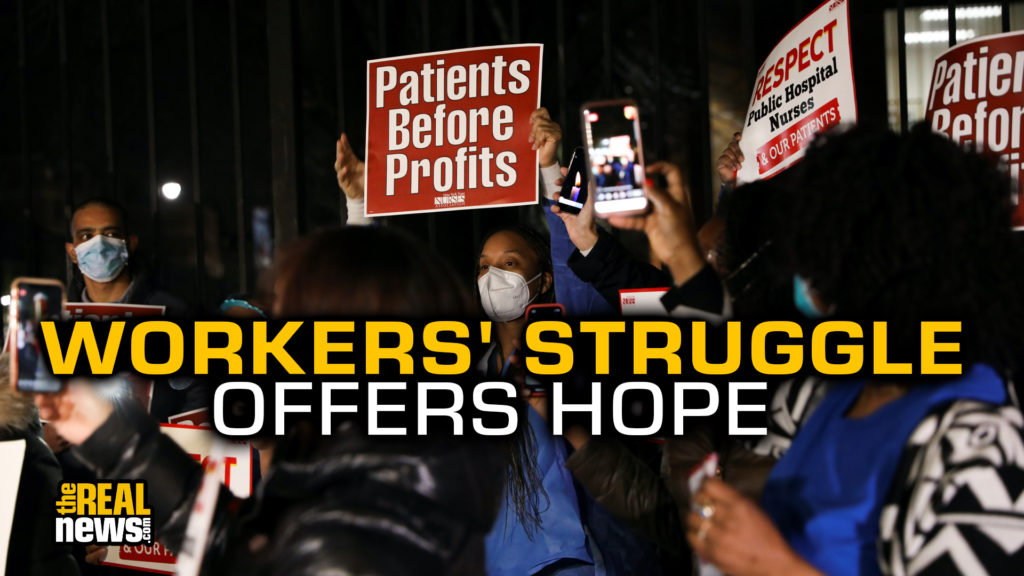 Jaisal Noor: Welcome to The Real News. I’m Jaisal Noor. Grim times in the room, richest country in the history of the world, which the global pandemic has hit harder than any other, with over 600,000 confirmed cases and 26,000 deaths. At least 22 million people have already lost their jobs and will be saddled with crushing medical bills if they get sick. While the lion’s share of the government bailout is going to corporations and the wealthy, banks are seizing the measly $1,200 stimulus checks of those in debt. The Trump administration’s response has been nothing short of catastrophic. Mismanagement, lies and misinformation, downplaying the viruses threat, and refusing calls to force industry to produce badly-needed personal protective gear has all contributed to the staggering death toll and is verging on authoritarianism.

Meanwhile, the democratic socialist challenger, who energized a movement to take on these ills by guaranteeing rights like healthcare and housing, has bowed out of the race and endorsed his opponent. To talk about all of this, and perhaps more importantly, what should give us hope in these grim times, is Dr. Gerald Horne. He holds the Moores Chair of History and African American Studies at the University of Houston, is the author of dozens of books, including his latest, White Supremacy Confronted: U.S. Imperialism and Anti-Communism vs. the Liberation of Southern Africa from Rhodes to Mandela. Thank you so much for joining us again, Dr. Horne.

Dr. Gerald Horne: Thank you for inviting me.

Jaisal Noor: So I want you to start off by talking about your evaluation of Donald Trump’s response to this catastrophe. I remember in our interviews back in the previous election, you predicted that he had a … When a lot of people counted him out, you were spot on, because you said that we’re not taking his threat seriously and you correctly predicted that he had a real chance to win the presidency. We’re years into this now. There’s an election coming up. How do you evaluate Donald Trump’s response? Bernie Sanders has called him the worst president, the most dangerous president in the history of this country. Do you agree with that assessment?

Dr. Gerald Horne: I wholeheartedly agree with that assessment. You need look no further than the recent move to defund the World Health Organization in the midst of a global pandemic which billionaire Bill Gates said that it’s as dangerous as it sounds. This is taking place in the midst of his hamfisted inaction and nonfeasance with regard to setting up testing, with regard to providing personal protective equipment to endangered hospital workers. And I’m afraid to say, that for once I may agree with an assessment of the International Monetary Fund, which in a recent report suggested that the global economy, particularly the economy of the United States of America, is on the cusp of what might be the most calamitous economic situation since the Great Depression of the 1930s.

You need look no further than the fact that Disney Corporation, a multibillion dollar giant, which just a few weeks ago seemed to be sailing along quite nicely, is now reduced to borrowing $30 million a day, laying off workers by the thousands, shutting down theme parks, shutting down its cruiser lines. The whole cruiser business seems to me to be headed to be belly up since that seems to be a Petri dish for the circulation of the coronavirus. And we also see that there has been an apocalypse in terms of retail, that is to say Best Buy is laying off workers, JC Penney’s might be on the verge of bankruptcy. We see hotels empty. So this is a very dangerous situation that we’re facing. And the 45th US president only seems to be concerned with his own personal popularity rather than the welfare of the people of the United States.

Jaisal Noor: So this is solicited responses from both the right and the left. On the right, in Michigan yesterday we saw these lines of protestors at the State House with chants of “Lock her up”, to the governor of Michigan demanding the economy be reopened despite the threats, despite the real catastrophe that could result. The protesters feel that the economic impact will be worse than the potential health impact, even though many of those protesters were wearing masks, in no small bit of irony. And on the other hand, the left is grappling with the dropping out of Bernie Sanders, which for many people was a real hope to address this crisis in a way that sort of addresses the fundamental root causes of this crisis and inequality. He’s dropped out. He has endorsed Joe Biden. And we know that for a lot of people … We don’t know how many people, but for a significant amount of Bernie Sanders supporters, it could be something like 10% as in previous elections, the idea of supporting Joe Biden is something they will not tolerate.

Dr. Gerald Horne: Well, with regard to the first item, that is a chilling and most dangerous development. These so-called constitutional conservatives rallying at the State House in Lansing, Michigan. This is coupled with similar moves that are taking place in Idaho, which you may recall is the state that is the de facto headquarters of white supremacists. A number of the leaders of the August 2017 pro-Nazi pro-fascist rally in Charlottesville, Virginia actually had roots in Idaho. And I’m afraid to say that this is also coupled with the spectacular rise in gun sales that is taking place as we speak. And I’m also happy to say that the Sanders supporters, including Alexandria Ocasio Cortez, are quite right to keep putting pressure on the presumptive Democratic Party nominee for president. Congresswoman Cortez has said that she is willing to support Mr. Biden, but she feels that her many supporters will be more comfortable in supporting Mr. Biden if he would move towards the Sanders agenda, including universal health care, including cancellation of student debt, including raising the minimum wage quite upwards. So this is where we sit and stand as we speak.

Jaisal Noor: And he talked about universal health care. I thought it was fascinating that a poll just put out put the popularity of single-payer healthcare the highest it’s been. The majority of Americans now support it, according to recent polls. And that’s despite the propaganda effort by many of these candidates dominating the airwaves. You had insurance companies buying ads during these debates, arguing against universal healthcare. And we have Joe Biden, the presumptive nominee … And I don’t think he’s a lock because he’s facing his own Me Too allegations and there’s been doubts for months about his ability to lead in moments like this. But he is the presumptive nominee. And he said in recent months that he would potentially veto a single-payer bill if it gets on his desk and he’s not satisfied with the payment mechanism of that.

But gets worse because the United States has oftentimes tried to impose and implant this same wrongheaded, harebrained system on other countries. That is to say, mining Nicaraguan harbors in the 1980s to move Nicaragua away from a so-called socialist system, overthrowing the Grenadian revolution in October, 1983, continuing the blockade against Cuba up to this very moment, the entire Cold War from 1917 till the collapse of the Soviet Union in 1991. And so now the chickens have come home to roofs.

Jaisal Noor: And finally, I wanted to hear from you what gives you hope in this time. We know that you have chronicled the abolition movement, the revolutionary movements around the world from some of these … from the global historic struggles like the Haitian revolution, which perhaps is sort of the most underdog story, fighting a colonial power and winning, the first successful slave revolt on a national scale, the first successful national labor revolt against unprecedented odds, defeating a superpower at that time. Talk about what gives you hope.

Dr. Gerald Horne: Well, what gives me hope are the reports that I read about wildcat strikes. For example, Chipotle workers in Manhattan storming off the job because their employer was jeopardizing their health by not supplying them with hand sanitizer and protective equipment. Amazon workers in Staten Island acting similarly, the fact that the United Food and Commercial Workers Union, 1.3 million strong, perhaps the strongest union in the United States in the private sector, has been clamoring about what’s happening to its membership, who are represented not only in meat processing plants from the Atlantic to the Pacific and are therefore indispensable with regard to food security, but also those who stock our grocery shelves, those who take our money at supermarkets. They’d been stepping up their militancy.

And so that’s what gives me hope, because I recognize and I realize that in the 1930s when there was the last Great Depression, that was also the moment when labor expanded its membership, when you had radical unions storming ahead. And I would like to think that that’s what’s going to happen in 2020 going forward.

Jaisal Noor: Well, Dr. Gerald Horne. It’s always a pleasure to have you on. And we know you have a book coming out this summer. Can you give us some more information about that?

Dr. Gerald Horne: Yes. The Dawning of the Apocalypse: The Roots of Slavery, White Supremacy, Settler Colonialism, and Capitalism in the Long Sixteenth Century. It will help to explain the most elementary fact, which is why we are sitting here now speaking English instead of Spanish or perhaps Turkish or not sitting here at all.

Jaisal Noor: All right. Thank you so much for joining us.

Dr. Gerald Horne: Thank you for inviting me.

Jaisal Noor: And thank you for joining us at The Real News Network.