City residents are fighting a history of exploitation through collective ownership of food, labor, and land, showing that another world is possible.

City residents are fighting a history of exploitation through collective ownership of food, labor, and land, showing that another world is possible. 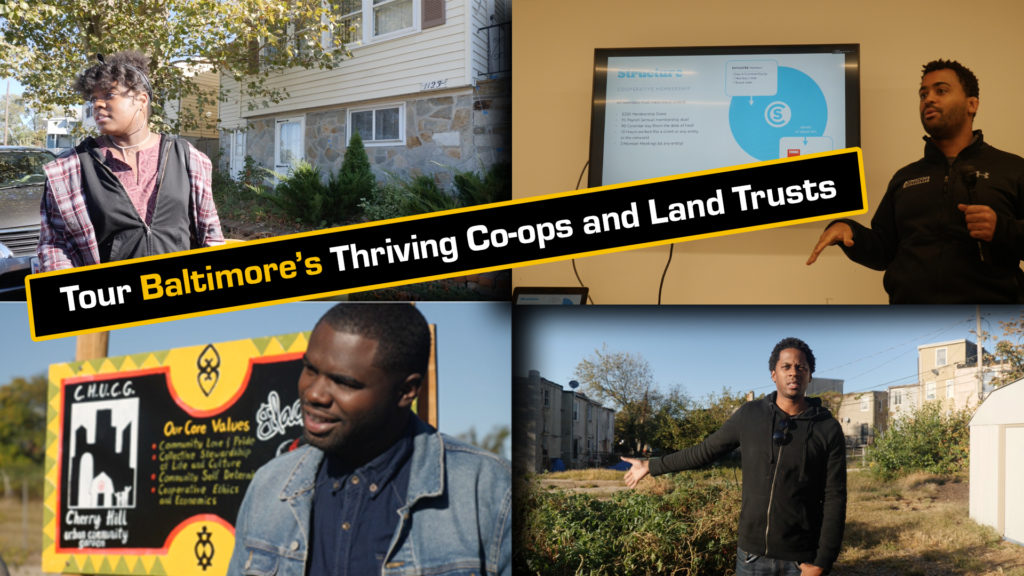 For decades, low wage work and exploitive housing policies have reigned supreme in Baltimore. Today there are tremendous disparities in wealth and health outcomes and a lack of access to affordable housing, but a growing number of residents are fighting exploitation through collective ownership of food, labor, and land, showing that another world is possible. Worker owners and community leaders discussed these efforts at the 2019 East Coast Workplace Democracy Conference, which included tours of local worker run cooperatives, land trusts, and community gardens focused on community empowerment. Many are located in low income working class black neighborhoods facing a lack of investment and opportunities as well as corrupt policing.

JOHN DUDA: The conference location is located right on the spine of the White L. We’re going to get outside of that today. We’re going to head down first to Curtis Bay, which is a working class neighborhood on the south side of the harbor, where we’re going to talk to folks doing youth organizing against environmental racism. They’ve got some really amazing stuff around land trusts and compost and all sorts of great stuff that’s going on. Then we’ll head over to Cherry Hill, another neighborhood in the south side of Baltimore, where we’ll learn about some efforts going on around food access and food sovereignty. And then we’ll head up to West Baltimore, blocks from where Freddie Gray was murdered by police.

JAISAL NOOR: In Curtis Bay, a neighborhood in South Baltimore, Free Your Voice and United Workers are creating affordable and democratically controlled housing through community land trusts. Recently, they helped secure a $20 million a year commitment from local officials to fund affordable housing throughout the city.

JAISAL NOOR: And are also pushing the city to end its reliance on trash burning incinerators. In the nearby Cherry Hill neighborhood, The Black Yield Institute has launched a successful urban farm. Over the past year it’s produced over 5,000 pounds of food and fed some 500 local residents.

LEE JORDAN: We work to create self-sustaining communities. We do that by cultivating black land and food sovereignty. Okay? One of the things we were very clear about is how we talk about our work and how in the language you use around the problems that we face. Okay, one of the major things we talk about is this term called food apartheid. Have y’all heard that right before, apartheid? So we talk about food apartheid. Before it was healthy food… Well, now it’s healthy food priority areas. Before that it was food deserts; it was food deserts. That was one of the issues that we fight here. We do that by we combat apartheid by growing food and actually selling it in our community.

JAISAL NOOR: Their next project is in the works. They plan to open what would be the only grocery store in the neighborhood, which would also be cooperatively owned.

KEVIN WHEELER: So right here, this red means that anybody who lives here can just come in and if they want some kale, they can just yank it on out. You follow me? So anybody who’s here, they can just come and yank it out. This is something that Rebecca, who’s the other farm lead decided on. And it’s a really great system because now people can actually understand that this is for them.

JAISAL NOOR: The first was a radical bookstore and coffee shop, Red Emma’s, run by 15 worker owners and another 10 on the path to become owners.

KATE KHATIB: We have about 25 people employed here in sustainable living-ish wage jobs, as close as we can get. And we’ve been around since 2004. We’re actually celebrating our 15th anniversary.

JAISAL NOOR: Over the years, Red Emma’s has incubated a number of other coops. One is Thread Coffee, a woman and queer run coffee roasting company, sourcing coffee from farm owned collectives.

BERNARDO VIGIL: Well, in addition to providing the best service in the city, we are the only worker owned and operated bike shop. What that means is that everybody that you interact with at the store is either an equal owner of the business or is part of our apprenticeship program training up to become a full owner of the business.

JOSEPH CURETON: Well, we’ve had about 35 members come through. Pretty much everybody has left with a job. But when they leave and get placed, they’re in full time employment, making more money than they did at the coop, which is great. And also people haven’t gone back to jail. So in Baltimore city it’s about 51% recidivism rate, which is just bonkers. But for us it’s 100% not recidivism rate or zero.

JAISAL NOOR: Another is Tribe, a staffing cooperative for worker owners in the tech sector. The Baltimore Round Table for Economic Democracy, a collective of Maryland based worker owners provides technical assistance and access to capital for the cooperative economy and has lent out close to a million dollars in the past three years to support these efforts.

BERNARDO VIGIL: The non-extractive model of lending that the Baltimore Round Table provides allowed us to take out loans necessary in order to build out this location. They did that without requiring any personal guarantees from any of our workers, which was really, really important. Because while we are endeavoring to pay everybody a living wage, we are still low wage workers and having a huge liability personally for the expansion of the business, was simply not tenable, since none of us really come from positions of great wealth.

JAISAL NOOR: Advocates say these projects will only continue to expand.

BERNARDO VIGIL: We really do see ourselves as a sort of prefigurative model for what a democratically controlled economy can look like. We’re sort of doing the work of figuring out the nuts and bolts of like, what does a world without bosses, what does a world without extractive capitalists actually look like and how can it function. So that when other folks are interested in taking this model and running with it, either in a different industry or in a different context, they’re able to look to our successes. They’re able to look to our failures and grow and expand from there.

SPEAKER: Thanks a lot for watching. Appreciate it. But do us one more solemn favor. Hit the subscribe button below. You know you want to. Stay up on the videos.