The far-right and anti-immigrant party, Swedish Democrats, increase their share of the vote from 13 to 18 percent, while neither of the two major party alliances, of the center-left and of the center-right has enough votes to form a government on its own. We analyze the result with Ali Esbati, an Iranian-Swedish member of parliament

The far-right and anti-immigrant party, Swedish Democrats, increase their share of the vote from 13 to 18 percent, while neither of the two major party alliances, of the center-left and of the center-right has enough votes to form a government on its own. We analyze the result with Ali Esbati, an Iranian-Swedish member of parliament 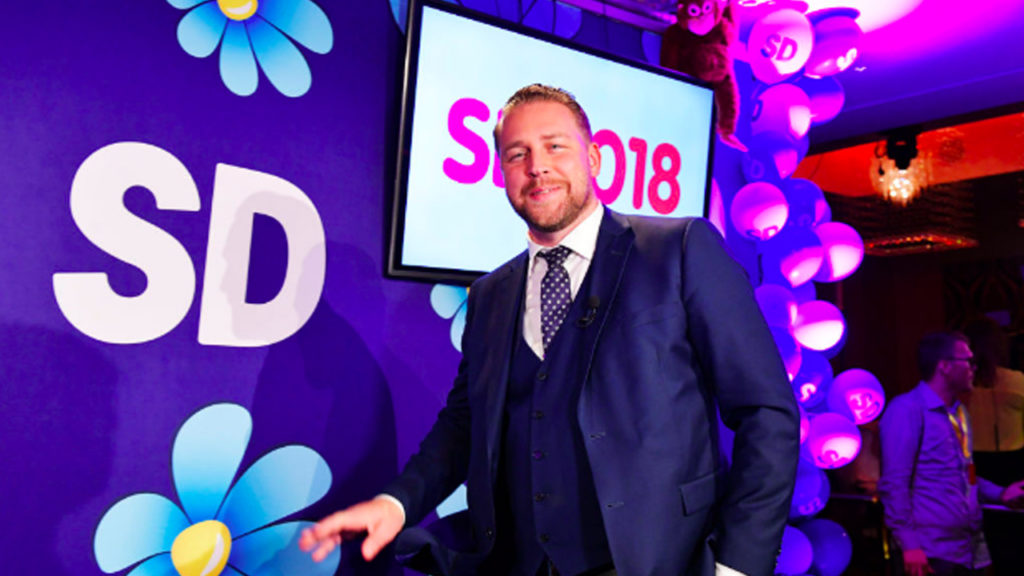 Sweden’s far right anti-immigrant party, the Sweden Democrats, made large gains in parliamentary elections on Sunday. Their share of the vote jumped from thirteen percent four years ago to almost eighteen percent. Meanwhile, the two major party alliances, the center left alliance and the center right Alliance, each one a nearly identical share of the vote of just above forty percent of the vote. This means that neither side has a parliamentary majority or enough seats to form a government. Since both the centre left and the centre right Alliance rule out a partnership with the far right, it is likely that Sweden will be in extended coalition negotiations to form a government.

The far right’s victory is yet another instance of voters rejecting traditional parties and politicians and favoring right-wing extremism in Europe. Joining me now from Stockholm, Sweden to analyze the Sweden election results is Ali Esbati. He was born in Iran but has lived in Sweden since 1986. He’s currently a member of Sweden’s parliament for the Left Party and is a spokesperson for labour market issues. Thanks for joining us today, Ali.

ALI ESBATI: Thank you for having me.

GREG WILPERT: So, based on pre-election polling, it was not such a big surprise that the far right and Sweden, the Sweden Democrats, gained five percentage points in this election. Also, this solidifies a European trend as, I mentioned, in favor of the far right. So, how do you make sense though of this are result in the Swedish context and what do the Sweden Democrats represent exactly?

ALI ESBATI: Well, I would say that you need to go back quite a few years to understand the roots of what is going on now with the Sweden Democrats. I think, as you mentioned, this is part of a broader trend that you can see in many parts of Europe, where neoliberal policies for decades have sort of hollowed out the regular conflict between left and right as we know it. And when people are sort of disappointed with a lack of alternatives in economic policies, to some extent at least, there is space created for for right-wing populism.

And I think it’s important to understand that in parliamentary terms in relation to the centre right coalition, because what happens now is that the parliamentary situation is not very much different from what has been the case during the last four years. But one big difference is that the traditional Conservative and Liberal parties have been sort of playing with the idea of somehow creating alliances, not maybe in government, but in one way or another creating alliances with the right wing populists.

And this has very much been something that the employees’ organizations and forces related to them have wanted to create sort of a right wing bloc which use the votes of right wing populists and right wing extremists to push back welfare rights and promote low taxes, lower taxes and more inequality, et cetera.

ALI ESBATI: I think that’s an interpretation that doesn’t really hold for the facts if you look at both Swedish history and in other countries where there has been- I mean, if you compare countries where with a lot of immigrants coming and and fewer immigrants coming, you you can see that that’s not a decisive issue. You have very strong right wing populist movements and parties in countries where there have been extremely few asylum seekers being allowed to stay in that country, like Finland or Hungary. These are just a few examples. And if you look at Sweden, Sweden has had quite large inflows of asylum seekers in for many decades, and still it has been a country that has been sort of an exception in Europe for not having strong right wing populist parties in its parliaments.

Sweden Democrats, they entered the parliament in 2010, and by that time most European countries had parties like them already being very strong in and in parliament. So, this is a movement that has more to do with growing inequality, with the legacy of neoliberal consensus on some parts of the political spectrum and that the right sort of radicalizes itself. There is a tendency for strong economic forces to seek the support of parties and movements, I mean that they represent those kind of forces. And you could see some similarities with many other European countries and to some extent with Trumpism in the United States also, even though of course there are huge differences also.

GREG WILPERT: Of course, one of the reasons that there’s been this tremendous or fairly large increase in the far right of that, of course, one of the big parties to moves are the Social Democrats. For decades, they have dominated Swedish governments. And their share of the vote dropped from forty five percent in 1994 to only twenty-eight percent in the last election on Sunday. So, how do you explain that? I mean, what is it about their policies that have caused them to lose so much popularity?

ALI ESBATI: Well, it’s pretty clear I think that you can you can see this tendency also in social democratic parties all over Western Europe and all over Europe, that if those parties follow more sort of Blairite policies, they are not able to provide their constituency, their base, with suggestions and proposals that can create hope and the sense that things can be better and things can be different if they are in power in terms of economic policy, in terms of equality, et cetera. Then they will have a hard time keeping their numbers up.

And you can see also that the Swedish Social Democrats have been still relatively strong relative to many other social democratic parties because they still have this tradition, they have a strong presence in the trade unions. The trade unions are strong in Sweden still, even though they have been weakened compared to the 80s and 70s. And so, there is always counteracting tendencies as well. And you’ve been able to see that during the last four years where there’s been budgetary cooperation between the red-Green government, the Social Democrats and Greens, where there has been presented reforms that are more like traditional social emocratic policies.

This has been quite popular reforms and it has helped the Social Democrats to keep up their numbers. And you could see they were going even further down if you look at the opinion polls a few months ago, when they sort of used the last months of the election campaign to propose a few policies that were pretty menacing, they reminded people of the more traditional Social Democratic Party policies, an extension of of parental leave, you could say, or an extension of paid vacation, a combination of those. And that helped them regain some of the losses that they were doing.

But the tendency is very clear since many years back, that it won’t work for a Social Democratic Party just to present itself as someone who’s not as bad as the liberal conservative right. If they do that, if people don’t see a big difference between them in terms of economic policy, tax policy, et cetera, then there will be other issues that that resurface as decisive. And in that climate, you will have right wing populist parties being very successful in entering the political sphere and putting their issues on top of the agenda. And then the social democratic parties will have a very hard time of of keeping up their numbers.

I think if you look at Great Britain, if you look at what Jeremy Corbyn is doing, that’s an alternative to what’s been going on in many other countries in Europe in terms of how the social democrats have tried to to navigate in the in the political landscape. In many other countries where there’s been a very different approach, you’ve even had social democratic parties totally imploding like in Southern Europe, in Greece, Italy, et cetera.

GREG WILPERT: So, the big question though now is what is going to happen next? There are eight parties in parliament and two alliances, the center left and the center right. And they all have, as I mentioned in the beginning, have an equal number of seats, the two alliances, but neither has enough to form a government will the reminds us break apart and form a right-left coalition? What do you expect to happen?

ALI ESBATI: That’s very complicated to say. What we have is a situation where the right is sort of facing a big difficulty. You have two parties in the former right wing Alliance, the moderate party, the traditionally big conservative party, and the smaller Christian Democratic Party. They have sort of opened up for having a cooperation of some sort with the Sweden Democrats. Not having a government, but some sort of cooperation. While the more liberal, in European terms, liberal parties, the Centre Party and and the and the Liberal Party, they would face huge trouble with their constituency if they would do anything that would sort of give the Sweden Democrats a concrete influence over the state budget, for instance, or important decisions of such a government.

So, right now everything is very unclear, which is not very typical of Swedish politics. But it can take weeks or even months before a government is formed. I think that we might end up in a situation that we’ve had in, for instance, Norway or to some extent in Denmark, where the liberal parts of the the right wing gradually would accept getting closer to the Swedish Democrats, which would give them a hard time with their voters, but that has to be. But it could take them to power for a few years.

And in any case, I think it’s important for progressive forces, for the left to keep mobilising against racist tendencies in Swedish society, which have been strengthened by the rise of Sweden Democrats, but which also means very much of a resistance from different layers of society. So, Sweden has definitely become a much more polarized country, so it’s important to note that the rise of the Sweden Democrats is definitely not something that is broadly accepted by everyone else, but rather the contrary. The Sweden Democrats are by far the most detested or disliked party outside their own voter groups.

GREG WILPERT: Okay, well unfortunately, we’re going to have to leave it there for now. I was speaking to Ali Esbati, member of Sweden’s parliament for the Left Party. Thanks again, Ali, for having joined us today.

ALI ESBATI: Thank you for having me. Bye.

A Socialist Defector: From Harvard to Karl-Marx-Allee

Kentucky Shooting of Two Blacks: ‘No Surprise,’ Given the Rise of Ultra-Right

Julian Assange’s Asylum in Ecuador’s Embassy is ‘Under Threat’

February 7, 2018
Sign Up for Our Newsletter
Help Us Make Real News!