The international proxy war on Syria destroyed more than $388 billion in physical capital, according to a UN commission. But political economist Ali Kadri says this conservative figure underestimates the damage imperialism does to humans, and how such destruction is inherent in capitalism

The international proxy war on Syria destroyed more than $388 billion in physical capital, according to a UN commission. But political economist Ali Kadri says this conservative figure underestimates the damage imperialism does to humans, and how such destruction is inherent in capitalism 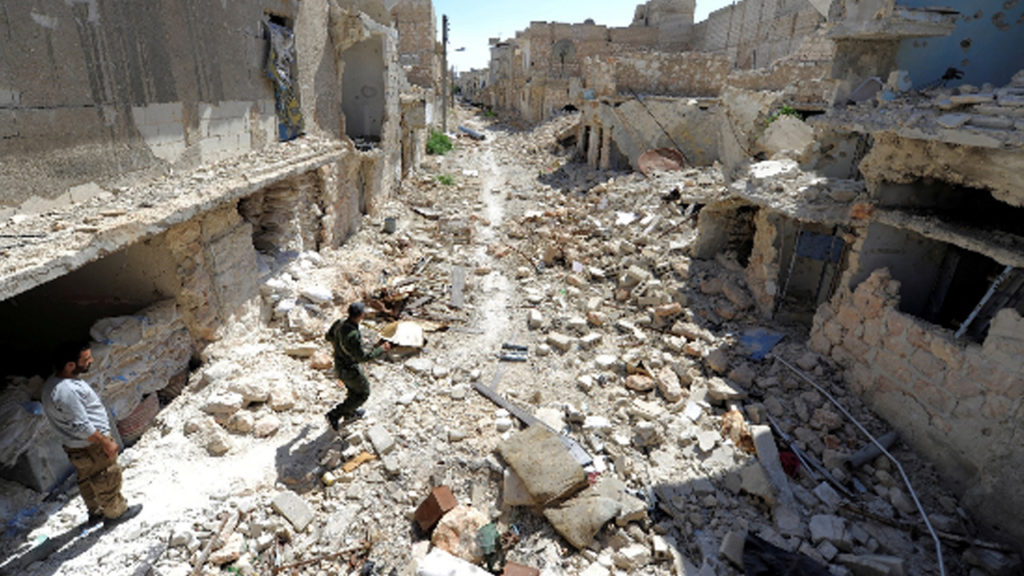 BEN NORTON: Numerous countries have fought a brutal international proxy war inside Syria for more than seven years. And this foreign-backed war on Syria has bled the Middle Eastern nation of nearly $400 billion, according to an estimate from the United Nations. The UN Economic and Social Commission for Western Asia has calculated that the volume of destruction in physical capital in Syria is estimated at more than $388 billion. In 2010, before the war began, Syria’s entire gross domestic product as a nation was just under $60 billion. That means the cost of the physical destruction caused by the war in Syria is equal to six and a half years of the country’s GDP, or in other words, this destruction is nearly equal to the total amount of market value of goods and services that the whole Syrian economy would have produced over the entire length of the war had the conflicts not taken place.

This staggering figure is still a conservative estimate, because the UN Commission made it clear that it does not factor in human losses resulting from deaths, or the loss of human competencies and skilled labor due to displacement, which were considered the most important enablers of the Syrian economy.

The civil war that erupted inside Syria in 2011 was immediately fueled by foreign powers bent on overthrowing the Baathist government in Damascus. The United States and its allies, Turkey, Saudi Arabia, Qatar, Jordan, and Israel, spent many billions of dollars arming and training rebels committed to toppling the Syrian government. In fact, the U.S. Central Intelligence Agency’s program covertly arming and training rebels was one of its most expensive operations since its program in Afghanistan in the 1980s, where the CIA trained Islamist extremists known as the mujahideen, who later morphed into the modern day Taliban and al-Qaeda.

The Real News spoke with political economist Ali Kadri, who emphasized that even this nearly $400 billion figure grossly underestimates the damage done to Syria by the war.

ALI KADRI: This is an underestimation, of course, of the real loss. The real losses of Syria are the human losses. Not the building losses. The human losses in the sense of also the capabilities, the human capabilities that, you know, that should be there to rebuild. Because rebuilding can be undertaken in a country like Syria with internal resources. It can be even mostly internally funded. Syria is one of the last capable, although it has incurred a lot of damage under the neoliberal state that was experienced prior to the war, Syria has maintained an economic culture which is more or less capable- a good productive structure which is capable of self-rebuilding.

So the $400 billion is really pulling, you know, the wool over the eyes. Because the dollar, in the end, is itself a fetish and a measure that is brokered by the power of the United States, and it can be used as a weapon. The real catastrophe is the erosion in the human production structure, and of course, the real losses; the loss of human lives. This destruction of human life is itself an economic process; not a question of tragedy. Of course, it is a tragedy. But it’s also, as a tragedy, it’s also an economic process. It’s also an industry. The very destruction of human life is a regulation of the labour process, internally and doubly because it is basically a form of depopulation. Relative- of course, absolute population, because there’s more than half a million people killed. But it’s also relative to the population, because what we see after the these wars is the life expectancy because of the erosion of the social and physical infrastructure. Life expectancy declines tremendously.

So if there is relative and absolute over the population, and this occurs through loss of lives, prematurely or suddenly. And this is a loss of value, because these lives were actually reproduced by society to support the future development of society. So they are part of the store of value of society and the sort of wealth of society. And that’s been eroded. And the ideas that we’ve lost can’t make things that we’ve lost. And when we lose the things and and the people and the ideas that make things, we’re losing a lot. This becomes somewhat irreplaceable.

BEN NORTON: Ali Kadri argued that international wars like those in Syria are also part and parcel of the capitalist system, and that capitalism has an inherent drive toward destruction.

ALI KADRI: This destruction of value, setting aside resources, which is the value and wealth of other nations, you already have a global crisis of overproduction, and you need to basically set aside and limit the industrialization and the capacity to produce of many other countries, and also regulate the labor costs. And regulating the labor costs means that it has to be a policy of depopulation. Literally a policy of killing. Which is as itself in the reproductive process, because it’s part of the reproductive process. The killing itself becomes an economic cost. We can look at it as a tragedy, but also as a business. It’s part of the production structure. When we are consuming anything that is not part of capital, which includes the depopulation, historically.

And so this has to be demystified, in many respects. And what happened in Iraq and what happens in Syria and what happens in many places in Africa is really the destruction and setting aside, is making sure that these countries never [inaudible] again to be able to contribute productively to the global structure. So when we- through the value system, when we produce a commodity in the end, the process of depopulation was part of the production process of this commodity. And that’s that’s the scary part, really, that’s the scary problem, that we live in a system which we should know already that the system as- the loss of species and the loss of life so far is impossible to reconcile or to recompense through the economic surplus that we’ve made. So because the whole idea of capitalism as progress has to be rethought.

BEN NORTON: In this way, Professor Kadri said, the war on Syria is similar to other wars like the war in Iraq. Likewise, it operates in many of the same ways as the neocolonial exploitation of the African continent.

So part of the process of capital is what they call metabolic or organic process, which means that there are corners or compartments within the production process, within this linkage of the planet which involves global labor, because all of global labor is organically tied, that create the historical mindset and historical momentum by which we do away with a lot of people. We basically depopulate- the propensity to depopulate is inherent to capital.

And what is happening in Syria is part of that. Because we think of the planet and the production process as interlocked and integrated. Once we see that Africa and the Arab world undermined by the wrath of imperialism, we also see the wages in the center, the wages of Americans haven’t risen. The idea, the scaremongering that occurs of the refugees, and so forth, all of this plays into the whole set of tools that capital has, you know, very irrational when we look at it, because we have good and bad. Capital doesn’t have good and bad. It will do as much damage as it could. What is intended is not simply these $400 billion that’s going to come in and rebuild, because that’s really insignificant. We’ve had more spent on rebuilding in Lebanon, more spent on rebuilding in Iraq. And yet the same problems and disasters- we still don’t have electricity, we still don’t have running water. All of this is part of the process of capital.

And what does capital want? It wants, it has a crisis of overproduction. It must set aside resources. So we have a history that’s going to do all the dirty work, all its instiutions, all the constitutions, all the mindset, all the racism, all of this is going to do the dirty work of capital, which is to basically set aside people, set aside, not allow countries in Africa and the Arab world to industrialize and develop. All of them.

So we have this process, which is ongoing. Under capital, this rationality of setting aside, in the most venomous ways, in the most destructive ways, becomes- and we see that in Syria. We saw that in Iraq. We saw that in Libya. It’s a continuous state. The process of, sadly, killing people is an economic process, and we are taking value which is worth something and destroying it to make more value for someone else.