Extreme Heat Could Make One Third of Planet Uninhabitable

Climate scientist Michael Mann says that, under a business-as-usual scenario, the mass displacement of billions could trigger an unprecedented national security crisis

Climate scientist Michael Mann says that, under a business-as-usual scenario, the mass displacement of billions could trigger an unprecedented national security crisis 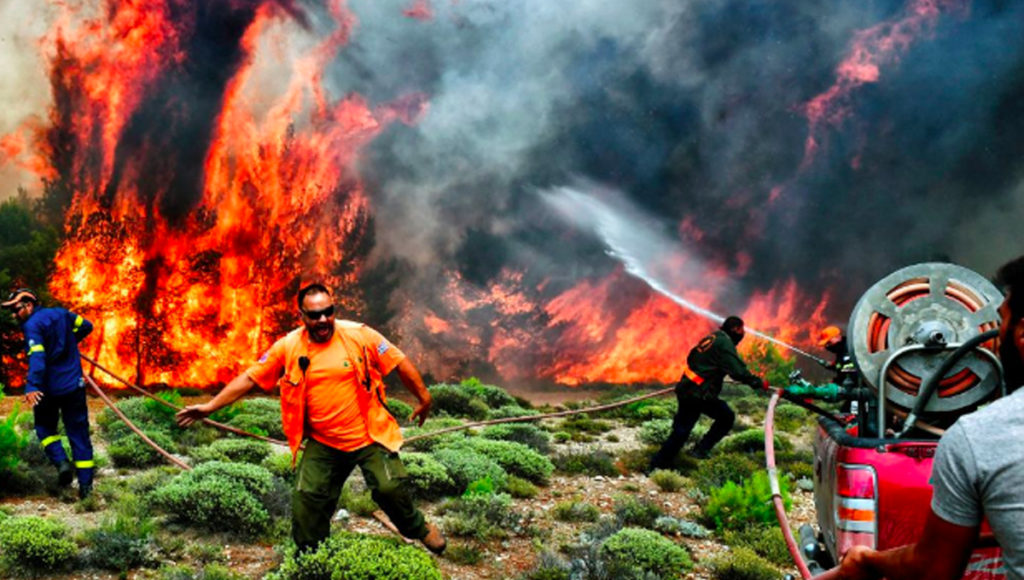 So far, the summer of 2018 is shaping up to be a historic sizzler, and not in a good way. In Greece, near the capital of Athens, devastating wildfires brought on by heat, dry weather, and strong winds have caused what is being described as a national tragedy. Ninety-one people have died and 25 remain missing, making this the deadliest forest fire in all of Europe since 1900. In July, amid unusually hot and dry conditions, dozens of wildfires raged across Sweden as far north as the Arctic Circle, forcing Swedish authorities to call for help from the international community. Temperatures in the Arctic Circle have reached upwards of 32 degrees Celsius. As Europe sweltered through an extraordinary heatwave, Portugal and Spain are bracing for the mercury to break the all-time European heat record of 48 degrees Celsius later this week. Here in Quebec, heatwaves are estimated to have contributed to more than 90 deaths this summer, most of the victims being elderly persons living alone in sweltering apartments. And mammoth infernos raging in California have so far claimed eight lives, with forecasters saying that the extreme heat and bone-dry conditions are likely to make those infernos even worse in the days ahead.

Now here to discuss these extraordinary conditions with us is Professor Michael Mann. Professor Mann, a frequent guest on The Real News, is a distinguished research professor and a director of the Earth Systems Science Center at Penn State University. He’s the author of the book The Hockey Stick and the Climate Wars; and his latest book, coauthored with Tom Toles, is titled The Madhouse Effect: how Climate Change Is Now Threatening Our Planet, Destroying Our Politics, and Driving Us Crazy. Thank you again for joining us, Professor Mann.

MICHAEL MANN: Thank you. Good to be with you.

DIMITRI LASCARIS: So I’d like to start by talking about the remarkable heat we are seeing in the Arctic. I understand the Arctic is warming at least twice as fast as anywhere else in the world. Why is this happening, and why should we be concerned about rapidly rising temperatures in a part of the world that is so sparsely populated.

MICHAEL MANN: Yeah. So part of why it’s happening is that the ice in the Arctic is melting. The sea ice that forms in the winter is melting earlier and earlier as we get into the summer. The less ice there is, the less sunlight there is to reflect back to space. That means more of that sunlight heats the ocean and warms it up.

And so we call this ‘Arctic amplification.’ It’s a very fundamental prediction of climate models. It’s one of the more robust predictions. Basic physics tells us that that region of the planet should warm up faster than the rest of the planet. And that’s what’s happening. Now, why should we care? Well what happens in the Arctic doesn’t stay in the Arctic. It’s not like Las Vegas. When you warm the Arctic that actually changes the temperature pattern in the atmosphere, as you go from the equator to the pole. Warming the Arctic, warming the high latitudes more means that you’re decreasing the contrast in temperature as you go from the warm tropics to the cold polar region.

And it’s that temperature contrast that is actually responsible for the jet stream, this band of winds in mid latitudes that moves weather systems along. So we’re actually decreasing that temperature contrast. We’re decreasing the strength of the jet stream. And that, in substantial part, is why we’re seeing these weather systems get stuck. They don’t move on like they used to, because there isn’t a strong jet stream to move them along in the summer. That means that you get very persistent weather patterns. If you have an unusual weather pattern or a high pressure system in one place, that means warmth and dryness, or a low pressure system somewhere else, which means wet conditions, those conditions persist day after day because those high and low pressure centers aren’t moving off to the east nearly as quickly as they used to.

We think that climate change is playing a critical role, and that’s why we’re seeing these unprecedented weather extremes. It isn’t just that the weather is unusual, but it’s so persistent. The same location getting baked by the sun day after day, the same locations getting rained on day after day. That’s when you get unprecedented flooding and heat waves and droughts and wildfires.

DIMITRI LASCARIS: Thus far I haven’t mentioned Asia, but a new MIT study published in the journal Nature Communications makes some dire predictions about the future of China’s most heavily populated and agriculturally important region, the North China Plain, which includes Beijing and Shanghai. And that study focuses on anticipated trends in something called wet bulb temperatures. Could you explain to us what wet bulb temperatures are, and please talk to us about the conclusions of the MIT study.

When you start getting heat indices up, upwards of the high 30s Celsius, you know, 100 degrees and higher heat index values, human beings basically can’t cope with that sort of heat. We can’t get rid of heat fast enough to cool off our bodies under those conditions. And that’s when you start to see mortality, particularly among the young and the elderly. So we have to be very concerned about these rising heat index values. It’s a measure of the warming effect of increasing greenhouse gas concentrations combined with the fact that the warming of the planet puts more moisture into the atmosphere, so the atmosphere becomes more humid. That adds to the effect of heat index that you feel.

DIMITRI LASCARIS: And specifically, the study I mentioned at MIT talks about this extraordinarily heavily populated region of China, and agriculturally important region, becoming, being sort of ground zero. Being the region that could be most affected within the next 70 years or so by rapid increases in wet bulb temperatures. The study talks about, you know, having to take drastic measures to avoid that eventuality. What kind of measures do you think need to be, going to be taken to prevent, if that is indeed possible at this stage, these vast swaths of the earth becoming uninhabitable because of extreme wet bulb temperatures?

MICHAEL MANN: Yeah, that’s right. So there’s a large part of the earth in the tropics, regions like China in the extratropics may also reach levels of wet bulb temperatures and heat indices that, again, exceed the values that we and other living things can tolerate. So the fundamental solution to that problem, obviously, is solving it at its source. Stopping the burning of fossil fuels. Transitioning to renewable energy so that we don’t continue to warm the planet.

But even under the best scenario, even if we act immediately, and in a concerted fashion, to lower our emissions and avoid, say, you know, two degrees Celsius warming of the planet- which many scientists point to as where we really enter into dangerous, truly dangerous catastrophic climate change- even if we were to do that, we’re already going to have baked in a certain amount of additional drying of the continents, additional melting of ice, rising sea level as a result of melting ice and expanding seawater as it warms. So we’re talking about potentially displacing millions of people; in fact, in the billions.

You know, China is home to more than a billion people alone. India more than a billion people. As these regions become unlivable we’re starting to displace significant chunks of our population, significant fractions of our population. And that means more people, a growing global population, competing for less space, less land, less food, and less water. And that’s a recipe for a catastrophe. So obviously we have to be concerned about, you know, any of these climate change impacts that are likely to lead to massive environmental refugeeism, literally people fleeing these regions of the earth that are becoming unlivable. And when we’re talking about, you know, more than a billion people [inaudible] conflict, it’s going to lead to national security issues far beyond anything that we’ve encountered.

DIMITRI LASCARIS: And lastly, Professor Mann, 2018 has been a La Nina year, the opposite of El Nino. Instead of waters being warmer than usual in the Pacific they’re cooler than normal. The global temperature, I understand, from January to May broke the record for La Niña year. Do you anticipate that El Nino will materialize in the months ahead? And if so, what effects would you expect that to have on global temperatures?

Here’s the thing. The global warming signal now is already more than a degrees Celsius. It’s an order of magnitude larger than the impact of El Ninos and La Niñas on global temperatures. So what El Ninos and La Niña do now is to slightly modify the global average temperature. So you can think of this as little wiggles. But those wiggles are on this ramp, the steadily rising ramp of a warming planet. And increasingly, even when you get one of the down wiggles due to a La Niña, which would have in the past led to fairly cool global temperatures, that is only a minor relief, because the global warming signal is overpowering these natural factors.

So you know, whether it’s an El Nino or it’s a La Nina this year or next year will determine the precise rank. Is it the third warmest year, the second warmest year, the fourth warmest year. But increasingly, even during these La Niña years, which are supposed to be cool for the planet, those years are still ending up in the top four, top five warmest temperatures. That tells us that the global warming signal is now completely outpowering the effect of natural climate variability.

DIMITRI LASCARIS: And this is Dimitri Lascaris, reporting from Montreal for The Real News.