A day after a new US Government report warned of imminent climate catastrophe, TRNN spoke to some of the protesters who marched and shutdown traffic in Manchester, England, to urge action over the climate crisis

A day after a new US Government report warned of imminent climate catastrophe, TRNN spoke to some of the protesters who marched and shutdown traffic in Manchester, England, to urge action over the climate crisis 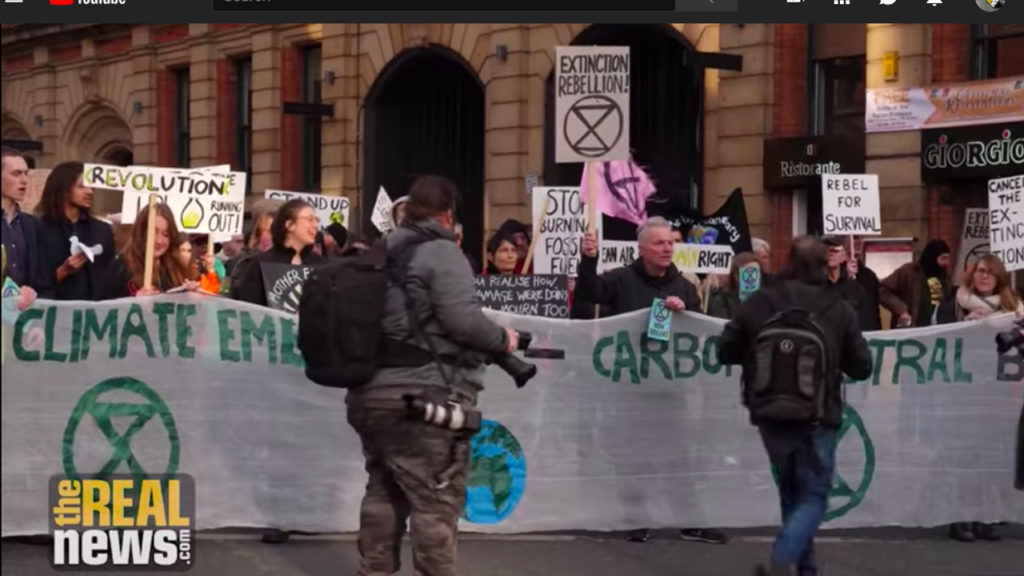 PROTESTER: We are Extinction Rebellion. We’re here to protest the government’s inaction on climate change. They’ve failed us with inadequate policy over the last thirty years. We demand the government declares a climate emergency, that they communicate this to the general public, that they set up a national assembly of citizens to help decide on policy and that they’re committed to carbon neutrality by 2025.

JAISAL NOOR: I’m Jaisal Noor in Manchester, England. As you can see behind me, dozens of people have sat down in the center of the street to protest climate change as part of extinction rebellion. Hundreds of people marched today in Manchester, perhaps thousands more in London. Last week, 70 people were arrested in London as they shut down five bridges, key arteries. And the point of the protests is to draw attention to the catastrophic impacts of climate change and to demand immediate action.

JAISAL NOOR: This march comes just a day after a U.S. government report detailed the catastrophic impacts of climate change already underway and the future impacts that could happen, including hundreds of billions of dollars in economic damage across the United States and the world.

SPEAKER: The ecological crisis impacting upon this nation, and indeed this planet, its wildlife, can no longer be ignored, denied, nor go unanswered.

MINA: Our goal is basically that the government acknowledges that we are facing an emergency, and it demands that we implement the necessary procedures to declare a crime emergency and cut carbon emissions. I think XR has a better chance than anything I’ve ever met of working, because it doesn’t tell people what to do, it allows people to mobilize themselves, it gives people the freedom to choose and tells them that they have that power to do it themselves.

JOSH REDNER: Because we’re facing the greatest crisis in the history of humanity on current trajectory as we’re headed towards sort of major, major disruption by climate change within the next few decades, within my lifetime. I’ve got friends with small children; their lives are quite likely to be destroyed by this if things don’t change soon.

JOSH REDNER: Well, that’s actually interesting because Trump’s widely thought of as sort of the archetypal climate denier due to his public statements. But if you look at what he’s actually doing in his private life, his company has actually recently applied to the Irish Government for planning permission to build flood defenses around his golf course due to the expected sea level rise and increase in frequency and intensity of storms that are basically putting his property at risk. So even if he doesn’t believe in climate change, the people who are running the show behind the scenes, they know exactly what’s going on. They’ve known exactly what’s going on for decades and their response has been pumping funding into groups that try and basically try and cloud the judgment of the public, essentially.

Look at the recent midterms, look at the level of funding from fossil fuel interests for climate denying candidates, basically trying to block any attempt to get any kind of effective legislation through to limit CO2 emissions. These people know what’s going on and they’re basically acting to try and prevent action on it. This is due to the system, the companies that are tied up in fossil fuels and the financial institutions that are actually increasing investment in things like fracking, tar sands. These are the worst things that we could be investing in, and the people in power are basically behaving as if they’re trying to make things as bad as possible as fast as possible. And the only people who can actually stop that is the mass of the population.

Extinction Rebellion is a sort of grassroots organization. We’re trying to organize this in a democratic way to try and join the people together. We’re taking inspiration from movements from through history like the suffragettes, like the civil rights movement in America, the fight against apartheid, all these movements of ordinary people who through history have actually joined together and won things from power, they’ve won rights, they’ve won the vote, they’ve made strides towards greater equality. We’re trying to take inspiration from them to sort of force the issue.

Climate justice, to me, means that it’s sort of the opposite of what we have now, essentially. So the projections for climate change now, and this actually goes somewhere into explaining why there’s been such a lack of action, is because the impacts will disproportionately affect the most vulnerable people in societies around the world. So the people who are likely to be feeling the brunt of the force the earliest and the hardest are people who are already suffering. The UN released a report just a couple of years ago that found that already, displacement around the world due to war and things like that is already higher than it was during World War II. These are the people who are going to feel the brunt of climate change through drought, the impacts on food security, extreme flooding, extreme weather events. These things are going to impact the poorest people the hardest.

The Lancet released a report a couple of years ago that said that climate change is the single greatest threat to human health in the 21st century and the people who are going to be feeling those health impacts are, again, the most vulnerable people in the world. So that, for me, is complete climate injustice because the people who have contributed to climate change the most are the richest, the rich countries, Britain, the U.S., the industrialized nations who have burned all the fossil fuels, extracted all these resources for their own economic development to build these rich countries that we live in at the expense of the Third World and the poor people around the world. And now, they are the people who are going to be feeling the brunt of it.

So climate justice, for me, is an attempt to try and reverse these relations between the people of the world and sort of make a fair and equitable plan for how we’re going to cope with it. We know what we need to do, it’s time to do it. And the only way that we can force it is if enough people join together and get out in the streets and demand it.