Andrés Manuel Lopez Obrador, Mexico's new center-left president was inaugurated and outlined policies that were more ambitious than what he campaigned on, says Laura Carlsen, of the Americas Program of the Center for International Policy in Mexico City

Andrés Manuel Lopez Obrador, Mexico's new center-left president was inaugurated and outlined policies that were more ambitious than what he campaigned on, says Laura Carlsen, of the Americas Program of the Center for International Policy in Mexico City 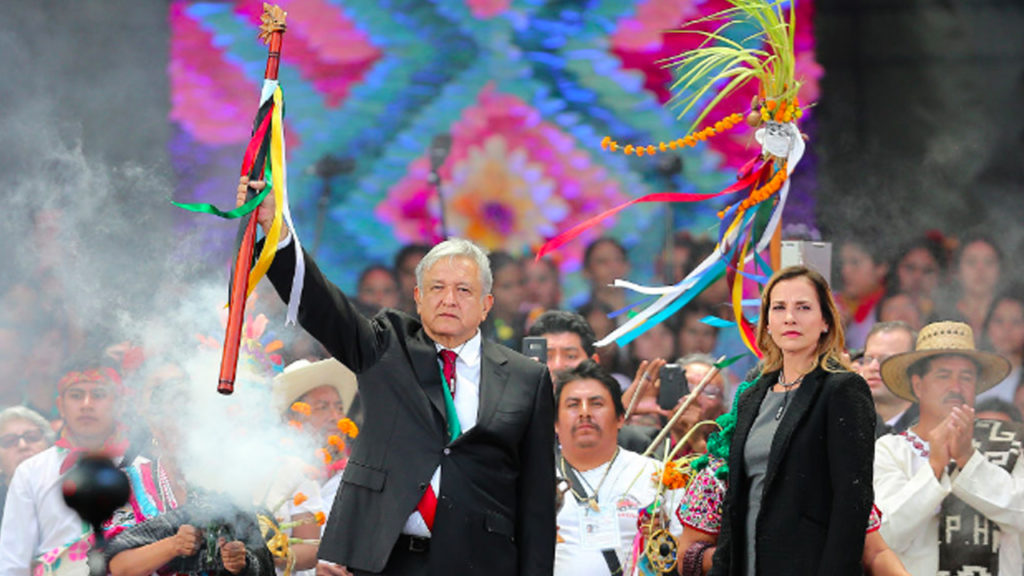 Mexico’s new president, Andres Manuel Lopez Obrador, or AMLO as he is known by his initials, was sworn into office in Mexico City on Saturday. The day long celebrations involved a speech to Congress, a large public gathering in Mexico City’s main square, the Zocalo, and a spiritual cleansing by Indigenous leaders. The inauguration took place a full five months after the election, on July 1 of this year, in which AMLO won 53 percent of the vote. During his speech to Congress, AMLO outlined some of his main policy objectives, including the creation of a National Guard to help fight crime. Here’s what he said.

ANDRES MANUEL LOPEZ OBRADOR: With the inefficiencies of police bodies and the greater increase in homicides, robberies, kidnappings, femicide and other crimes, I am calling on Congress to urgently approve a constitutional reform that allows us to integrate the Military Police, Marine Police and the Federal Police for a National Guard to organize the functions of public security in a manner that respects human rights.

GREG WILPERT: Joining me now to discuss Lopez Obrador’s inauguration and what it means for Mexico is Laura Carlsen. Laura is the director of The Americas Program of the Center for International Policy in Mexico City. She focuses on U.S. policy in Latin America and grassroots movements in the region. Thanks for joining us today, Laura.

LAURA CARLSEN: Thanks, Greg, for the invitation.

GREG WILPERT: So you were there for Lopez Obrador’s inauguration. What would you say were some of the main takeaways of his speech to Congress?

LAURA CARLSEN: I was surprised at the boldness of his speech to Congress. Because as you mentioned, we have this ridiculously long five month lame duck period in which he was being a lot more circumspect, a lot more cautious about, especially, his comments about the economic model. And in his speech to Congress, he called the neoliberal model a disaster, he said that it had failed over 36 years of implementation in Mexico. He talked about the broken promises in terms of what private sector and foreign investment was going to do for the economy, the low rate of growth, a lot of these statistics that he’s mentioned before, but perhaps not in such a straightforward manner.

And of course, Enrique Pena Nieto, the current president, was sitting right beside him on the podium of Congress looking sour faced, to say the least, as he made these criticisms. Now, he himself has not promised, for example, to revert the energy reform that privatized in many ways and opened up Pemex, the national energy company, to private investment. But he is beginning to outline a course of action that would move away from that model.

GREG WILPERT: Lopez Obrador’s election was actually quite historic in that it’s the first time since the Mexican Revolution of 1910 that someone who was elected was to the left of the long ruling Institutional Revolutionary Party. What was the mood at the inauguration and what are people now expecting from him?

LAURA CARLSEN: Well, remember that not only the first time that someone from the left was elected, and actually it’s not the first time someone from the left was elected in the sense that the left has had elections stolen from it, it’s the first time it’s actually been recognized, and the candidate has been able to take office. But because of these 71 years of one party rule, basically, under the Institutional Revolutionary Party, the PRI, and then a period of alternation with the Conservative Party that really didn’t open up the democratic system and certainly didn’t change the economic model, this was a first.

So people have huge expectations. One of the difficulties of this administration is going to be able to fulfill those expectations of AMLO’s own base, because they’re not only expectations, but they’re mobilized, and they will be making demands on government. He himself has actually encouraged that process. What you could see in the Zocalo is, I was asking people, “Why are you here, what do you expect?” They expect jobs, they expect violence to at least begin to decrease in the country. The general feeling is that things had gotten so bad that they have to get better now. And the general feeling is also that this is a president who can do that.

GREG WILPERT: I think that’s actually a good point that you mention, of course, that he ran previously, actually on two previous occasions, and it looks like the 2006 was almost certainly stolen from him. But in those times – pardon?

LAURA CARLSEN: And in 1988 too, with Cuauhtemoc Cardenas.

GREG WILPERT: Right. But in the previous times that AMLO ran for president, he ran what seems like on a more leftist platform than he did this time when he was more cautious. And this, in the sense, seems a little bit parallel to the Brazilian case, when former President Lula da Silva ran also several times as a very leftist candidate but then eventually got elected in 2002 on a much more moderate platform. And so, I’m wondering, is Lopez Obrador perhaps following that model? I mean, what do you think in terms of moderating his approach and reaching out to the business class and the military? But you say also that now his speech to Congress was more direct, more ambitious than what his program originally seemed to be. So what do you expect?

LAURA CARLSEN: Well the speech was a little bit more direct in that sense. But it’s definitely true, Greg, that he has become more centrist in this campaign in order to broaden a base. I think one of the lessons of having those elections stolen from the left in the past was the necessity to build a supermajority that could not be refuted or statistically reverted through any kinds of the dirty tricks that have been typical in past elections. And in order to do that, he felt like he had to build bridges with some forces that are typical in some ways to the leftist platform that he is espousing. So the first election in 2006, the actual slogan at the election was “the poor come first.” So that immediately put the economic and political elite in attack mode, and even part of the middle class, who feared that they would be ignored under a new government.

And what he did this time is he built bridges with even the major architects of the neoliberal system, some major business people who have said that they’re now modifying their views to be part of the AMLO team. And he created a kind of a more general message, which was “together we’ll make history.” So he’s talking about a fourth transformation, he says it’s going to be radical, but he’s got a lot of people on board who are highly invested in the status quo. And how he manages that, just like Lula in Brazil and other places where we’ve seen that, where it becomes more and more of a problem as the administration goes on, will be one of the big questions of his government.

GREG WILPERT: Well, we’ll certainly be keeping a close eye on it. I should also note that he has only, I think, two votes short of a two thirds majority in the Congress and that will, of course, make a big difference in terms of his ability to maneuver if, let’s say, he were to win two more votes or convince others to vote with his party. But we’re going to have to leave it there for now, and we’ll definitely come back to you as we see the situation develop. So thanks, Laura. I was speaking to Laura Carlsen from Mexico City. Thanks again for having joined us today.

GREG WILPERT: And thank you for joining The Real News Network. If you like Real News Network stories such as this one, please keep in mind that we have started our winter fundraiser and need your help to reach our goal of raising four hundred thousand dollars. Every dollar that you donate will be matched. And unlike practically all other news outlets, we do not accept support from governments or corporations. Please do what you can today.

Laura Carlsen is the Director of the Americas Program of the Center for International Policy in Mexico City. She focuses on US policy in Latin America and grassroots movements in the region.