As’ad Abukhalil discusses the role which Qatar plays in the ceasefire between Israel and Hamas. Qatar has saved the Palestinian Authority from financial collapse.  Meanwhile, Mahmoud Abbas has allied himself with Qatar’s staunch enemy Saudi Arabia

The Eurovision Song Contest taking place in Tel Aviv, Israel this week has been made possible only through a ceasefire signed between the Israeli government and the Hamas party in Gaza, with the help of Qatar. A delegation from Qatar is now in the Gaza Strip providing around $30 million of emergency assistance which will help Palestinians survive under the siege imposed by the Israeli military.

As'ad AbuKhalil, professor of political science at California State University, Stanislaus and writer of the blog The Angry Arab News Service, spoke to The Real News Network's Sharmini Peries about the nature of Qatar's support.

Peries and AbuKhalil explained that according to international law, it is on the shoulders of Israel to take care of the population that it is holding under military occupation.

It is because of Qatar, then, that Israel can celebrate the Eurovision Song Contest—even as Netanyahu continues to threaten to break the ceasefire. Peries observed that Israelis are gambling that enough artists will ignore the call to boycott the Eurovision contest it will become a show of strength for Israel, legitimizing the occupation. She notes also that Hamas has taken a gamble here with Eurovision and have allowed Israel to go ahead with it by agreeing agreeing to this ceasefire. AbuKhalil added that it speaks to the limits of Hamas, as well as the expanding power of Israel.

“It's a very sinister thing, presenting itself to the world as if it's a humanitarian gesture when it isn't. It's a service of occupation,” AbuKhalil said. “Everyone is trying to ingratiate themselves with the U.S. and that comes with ingratiating themselves with Israel.” 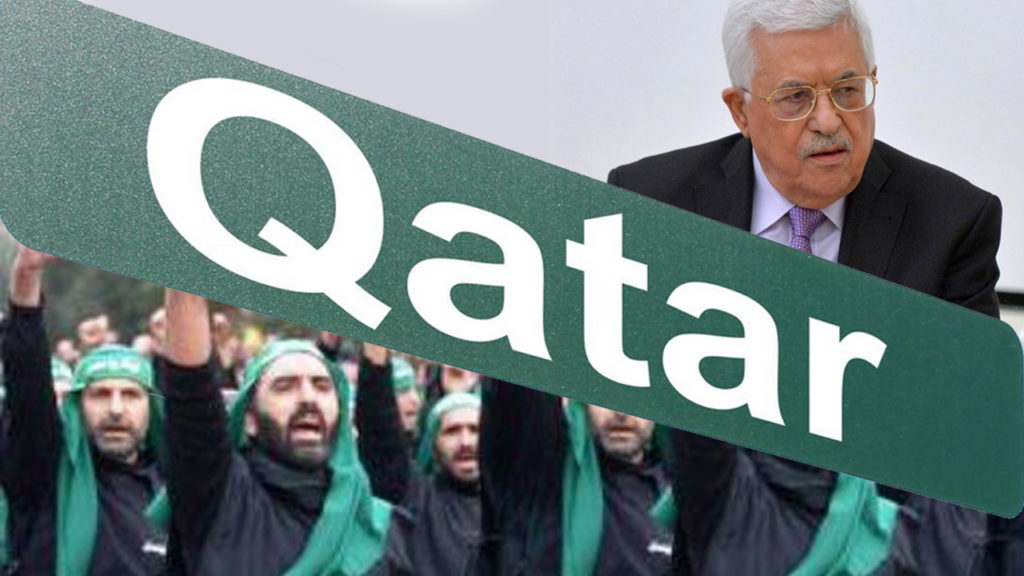 SHARMINI PERIES It’s The Real News Network. I’m Sharmini Peries coming to you from Baltimore. Despite thousands of cancellations in protest, the Eurovision Song Contest will take place in Tel Aviv on May 14th to 16th. It’s been made possible only through a ceasefire, which has been signed between the Israeli government and the Hamas Party in Gaza. As we speak, a delegation from Qatar is now in the Gaza Strip delivering about $30 million of emergency assistance, which will help Palestinians survive a little longer under the siege imposed by the Israeli military. It is noteworthy that Qatar is delivering the aid, although the responsibility for the well-being of the population under military occupation rests on the shoulders of the occupier— in this case, Israel— according to international law.

Joining me now is As’ad Abukhalil, professor of Political Science at California State University in Stanislaus and he’s a regular contributor at his blog site, The Angry Arab News Service. As’ad, so good to have you with us.

AS’AD ABUKHALIL Thank you for inviting me.

SHARMINI PERIES All right. As’ad, let’s start with the big question on the table. Why is Qatar assisting in this way?

AS’AD ABUKHALIL Well I think the Qatar regime is basically investing in the Israeli occupation. As your intro indicated, the responsibility of the upkeep and taking care of the population under occupation in Gaza, the West Bank, and the whole of Palestinians in historic Palestine, all under Israeli occupation, are the responsibility of the occupiers— and that’s the Israeli government. Basically, the Qatar regime, all Gulf regimes, are racing to accommodate themselves and to ingratiate themselves with the Trump administration. They are doing their best to get closer to Trump by getting closer to the Israelis. We see areas of normalization among all Gulf regimes— from Oman, UAE, Bahrain, Saudi Arabia, and now, Qatar— and Qatar’s relations with the Israelis go all the way back to the 90s. In fact, they were the first to openly initiate normalization measures than all other Gulf regimes, which maintained secret ties under the table.

SHARMINI PERIES As’ad, as you said, everyone is trying to ingratiate themselves with the US and that comes with ingratiating themselves with Israel, but Saudi Arabia has joined this alliance and Qatar is in dispute or fighting, in terms of the regional bloc, for some influence in the region. How do you respond to that conflict between Qatar and Saudi Arabia at this moment and how it’s getting played out in Israel-Palestine?

AS’AD ABUKHALIL I mean, clients of the US don’t always get along. There are schisms and divisions within the pro-American regional order in the Middle East. It has been the case for many a long time. Jordan and Qatar have had feuds, Saudi Arabia and UAE had feuds in the past, and so on. This should not in any way undermine the reality that all of them in the end fall into the US-Israeli camp. We should remember that Qatar is the most generous, largest host of US troops in the entire region. Many of America’s military operations and occupations spring from bases in Qatar, itself. You’re right. There are factions within the pro-American camp in the region, and within the Arab counter-revolution which began since 2011, there are factions. There is the UAE-Saudi Arabia faction and there is the Qatari faction. They disagree on who they want to pick and install in power, but the fact is, both camps are fundamentally anti-democratic. Both of them are normalizing with the Israeli occupation state, and both of them are trying desperately to ingratiate themselves with the Trump administration. And fourthly, both them are enemies of programs of social justice, progressiveness, leftism, and feminism in the Middle East region.

SHARMINI PERIES Now let’s take up this issue of the Eurovision. Israelis gamble that enough artists will ignore the call to boycott the Eurovision so that it will become a show of strength for Israel, legitimizing the occupation. Now, Hamas has also taken a gamble here with the Eurovision, that it’s an important celebration or festival, and that they have allowed Israel to go ahead with it by agreeing to this ceasefire. Is this historical that they accommodate each other when there’s a need of this sort?

AS’AD ABUKHALIL Not surprising at all. I have been arguing for many years that Hamas has reached a bankrupt dead end and that the future of Hamas can be read through the history of the Fatah movement, which resides in Ramallah today. It has basically failed in their agenda, and failed to present a real, credible alternative to the Fatah organization, and the way they managed the Gaza Strip has been quite repressive, unimaginable, and unrevolutionary. They also, like their rivals in Ramallah, have been repressing freedom of expression inside the Strip itself. Having said all that, the responsibility for all that goes within Gaza and the West Bank, which are territories under occupation, should be blamed squarely on the Israeli occupation and its sponsor in Washington DC. Hamas today is resorting to a reliance on the Egyptian mediation between it and the Israelis when the Egyptian regime or the Egyptian dictatorship is a sworn enemy to the Muslim Brotherhood of which Hamas used to count itself as a branch. And the Egyptian dictatorship is extremely close to the Israelis and they do not in any way have the best interests of the Palestinian people at heart. So the fact that they are resorting to the mediation of the Egyptians, tells me that they basically have no alternative. They have no agenda, no program, nothing to offer, and they’re just counting the days until maybe they reach an accommodation with the occupation and the West Bank regime in Ramallah.

AS’AD ABUKHALIL Well, first of all, I am not one to quibble with the designation of the Muslim Brotherhood per se, whether it’s terrorist or not. I question the fundamental right, this arrogant right by the US government, to label organizations and states around the world as terrorists. I mean, we just heard from credible sources that the US and its allies in their indiscriminate, massive, sinister campaign of bombing in Raqqah, managed to kill at least 1,600 civilians— 1,600 civilians, I repeat that figure. This came in the same time period when the UN for the first time publicly announced that the number of civilians killed in Afghanistan are now larger at the hands of US bombs and its allies, than at the hands of the Taliban. When the US is killing more civilians than the Taliban, it gives you an idea that it certainly should not have the moral authority to judge and label an organization on the basis of the criteria of terrorism. This is very much like the Israelis when they themselves declare their enemies and the people who want to resist their occupation as being terrorists. That should be said right away.

Now, I have witnessed in recent weeks and months how many academics, western journalists on social media, and others, are protesting widely the designation of the Muslim Brotherhood as a terrorist organization. I don’t mind the protests against that designation, but I wonder how come these same people never protested the fact that for many decades, left-wing, socialist, feminist Palestinian groups and Arab groups that have defied and resisted militarily Israeli occupation, have also been labelled as a terrorist organization, and we never heard protests by the DC think tanks and the like. The only reason they’re doing that, in my opinion, is because the Muslim Brotherhood has been quite good for Israeli interests since it reached power briefly in Egypt, or also partly in Tunisia. They can do business with the Israelis and they have reached an understanding with the Israeli lobby as far back as 2011.

Also, I noticed that none of these protests about the designation of the Muslim Brotherhood and this assertion about their peaceful intent, managed to admit that the Muslim Brotherhood has engaged in violence and has engaged in violence which killed civilians and they have also been tied to groups in Syria that were part of the Civil War. So, we cannot in any way declare that the Muslim Brotherhood has been a pacifist organization for so long. Let us remember the origin of the organization and its resort to violence was in the 1950s when it decided to take up arms against the regime that defied Western interests and Israel, the regime of Egypt. Since those times, the Muslim Brotherhood threw their lot in the camp of the Americans, the Westernist route, the decades of the Cold War, and they were sponsored and armed and financed by the Gulf regimes, which only after September 11th decided to blame them for their own problems and to declare them enemies of the people. So I do not like the designation, but I do not think that the US should be in a position to designate anybody.

SHARMINI PERIES With that, we’ll leave it there. As’ad, I thank you so much for joining us.

SHARMINI PERIES That was As’ad Abukhalil with The Angry Arab News Service.