According to an analysis of the Center for Economic and Policy Analysis, Ecuador's recent IMF loan of $4.2 billion comes with strings that will hurt economic growth. Ecuador doesn't even need the loan, says the report's co-author, Andrés Arauz

According to an analysis of the Center for Economic and Policy Analysis, Ecuador's recent IMF loan of $4.2 billion comes with strings that will hurt economic growth. Ecuador doesn't even need the loan, says the report's co-author, Andrés Arauz 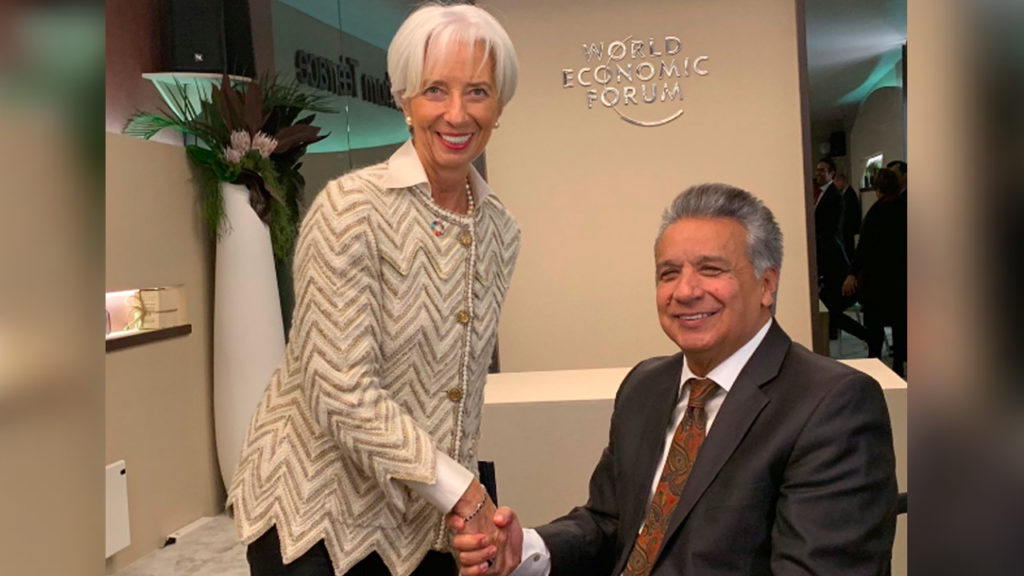 Protests against the economic policies of Ecuador’s President Lenin Moreno have been going on all week in major cities throughout the country of Ecuador. A broad coalition of social organizations— including labor, Indigenous, and campesino groups— are declaring their opposition to a package of austerity measures that the Moreno government was imposing on Ecuador since the beginning of this year. These measures include tens of thousands of public sector layoffs, health and education budget cutbacks, and the elimination of gasoline and electricity subsidies. In the works is also a labor market reform, which would increase the workweek, among other things. President Lenin Moreno began to implement many of these measures since the beginning of this year and they are part of a loan agreement that he struck with the International Monetary Fund last March for $4.2 billion.

President Moreno originally ran as the handpicked successor to President Rafael Correa, who was part of Latin America’s so-called “pink tide” of the 2000s. Correa had associated himself closely with other left or center-left governments in the region; such as Venezuela’s Hugo Chávez and Brazil’s Lula da Silva. Moreno though, shortly after his election in mid-2017, made a sharp break from Correa, accusing him of corruption and implementing a policy shift towards the right. He also withdrew Julian Assange’s asylum from the Ecuadorian embassy in London.

Joining me now to discuss the IMF loan and its likely consequences for Ecuador is Andres Arauz. He’s a former Director of the Central Bank of Ecuador and is currently a Doctoral Fellow in Financial Economics at the National Autonomous University of Mexico in Mexico City. Also, he recently co-authored a report together with Mark Weisbrot titled “Headwinds to Growth: The IMF Program in Ecuador” published this week by the Center for Economic and Policy Research. Thanks for joining us today, Andres.

ANDRES ARAUZ Thank you for the invitation, Greg.

GREG WILPERT So let’s start with why Ecuador even went to the IMF. Was it even necessary? And if so, why? And if it wasn’t necessary, why not? What do you think?

ANDRES ARAUZ Well, the circumstances in which Ecuador asked the IMF for a loan are very strange. Usually in Latin America, countries ask for loans when they’re in trouble, in crisis conditions. But in this case, Ecuador was growing. It had positive real GDP growth. It had sufficient international reserves. It had a stable balance of payments condition, and the overall situation in the economy was not bad. Not to say it was excellent, but it was not definitely a crisis condition or even a recession. The political Right in Ecuador had been demanding an IMF agreement for the last five or six years, even during the Correa presidency, because they said that an IMF agreement would be the only thing that would, sort of, anchor the economic policy of Ecuador in the medium term. So the true political objectives of seeking the IMF loan by the Moreno government had nothing to do with the financial or economic situation, but rather a policy orientation to anchor the political economy and the economic policy of Ecuador for the next four to five years, what we can see is a similar pattern that has been occurring in other loans throughout Europe and in Latin America as well.

GREG WILPERT So give us a brief summary of what the IMF loan agreement with Ecuador is like, and what do you foresee as being the main consequences of its implementation for Ecuador?

ANDRES ARAUZ Okay. So the IMF agreement, I would call it deeply ideological. It has very specific obsessions even— I would dare to call it— with restoring Central Bank independence. We must recall that Ecuador’s 2008 Constitution said, resolved to take away the independence of the Central Bank and to make it part of the government’s economic team, the economic ministries. So the IMF is clearly focused on restoring the autonomy and the independence to the Central Bank of Ecuador in order to give more leeway and more privileges to financial capital, so to the bankers basically.

And that independence entails basically forbidding the Central Bank from granting loans to the central government, to government. It forbids the public financial sector, which is fairly large in Ecuador, from engaging with the government, so it prohibits them from financing public investment. And it also says that it must guarantee private banks deposits at the Central Bank with public resources. So basically, institutionalizing a bailout mechanism within the Ecuadorian financial economic structure. These are the main IMF institutional changes that require certain economic policy orientations, which basically imply a huge austerity package that would have consequences in Ecuador’s real economy.

GREG WILPERT Give us some more detail on what kinds of consequences we are talking about. I know your report talks about and disagrees with the IMF projections in terms of economic growth, for example. Tell us about that and what other consequences you see.

ANDRES ARAUZ Okay. So we’ve titled the report “Headwinds to Growth” because it is a phrase that is recurrently being used by the IMF in the report when referring to their austerity package. The IMF finally admits that their policies, the ones that they are recommending as part of the conditionality agreement, will have a negative impact on economic growth. So that’s by the IMF’s own admission. We reviewed those projections and we say that even with those admissions, the IMF is overly optimistic because they have some accounting mistakes in the projections. So basically, this will imply a growth in the unemployment rate for the next three years. So in 2019, 2020, and 2021, the unemployment rate is projected to increase. Also, poverty is projected to increase.

And likewise, we have a massive five percent of GDP adjustment in terms of their fiscal austerity package, which implies basically that the Ecuadorian economy will have shrunk by that amount specifically geared towards most of the population. So basically, cutbacks in fuel subsidies, which means raising gas prices, raising electricity prices, a privatization of public assets, including the national state-owned telecommunications company and the national state-owned largest bank that we have in Ecuador, and also a privatization of the electric companies and several hydropower power plants that were built in the last six years during the Correa presidency are also part of the package. And of course, raising the value-added tax from twelve to sixteen percent that will have an overall impact in the national economy, and that will restrict and reduce household consumption throughout.

GREG WILPERT Wow. It really sounds like an all-out typical neoliberal economic program. Now, what alternative economic policies do you think Ecuador could have or should have implemented that would actually restore or create equitable economic growth in the country?

ANDRES ARAUZ Well, one of the things that surprises me most from the IMF report is a graph in the section called Debt Sustainability Analysis, where they show that had there not been an austerity package since last year that was implemented by the Moreno government, Ecuador’s economy would have grown between five to eight percent annually. So per year, the IMF admits that if they hadn’t applied this austerity package, this neoliberal package, the economy would have grown because that was the pace at which it was growing with windfall oil, from oil prices. And also, the other thing is the Moreno government pursued a tax amnesty that gave away about one percent of GDP to the largest transnational oil corporations that had evaded taxes in Ecuador.

So if they needed the money, they could have just basically, you know, pursued normal tax collection strategies by optimizing the tax evasion from the transnational corporations. We must recall that Ecuador is an oil-dependent economy. About a third of all of its exports are oil exports, measured in monetary terms. So it’s a lot of money that could have been gotten that way. Now, what really needed to happen was continued public investments. The Correa government left a development plan including a public infrastructure program for the next twenty years. So at least a part of that public infrastructure program could have continued and could have been financed with domestic liquidity that was available and continues to be available. And also, with foreign partners from all over the world that were interested in financing the public infrastructure program that characterized Correa’s government.

GREG WILPERT Wow. There’s really quite a turnaround from Correa to Moreno, which we’ve reported on before here on The Real News. But we’re going to leave it there for now. I was speaking to Andres Arauz, co-author of the CEPR report “Headwinds to Growth: The IMF Program in Ecuador.” Thanks again, Andres, for having joined us today.