Monday morning’s commute was disrupted in the nation’s capital when activists blocked 22 intersections to demand action from leaders to address climate change.

Monday morning’s commute was disrupted in the nation’s capital when activists blocked 22 intersections to demand action from leaders to address climate change. 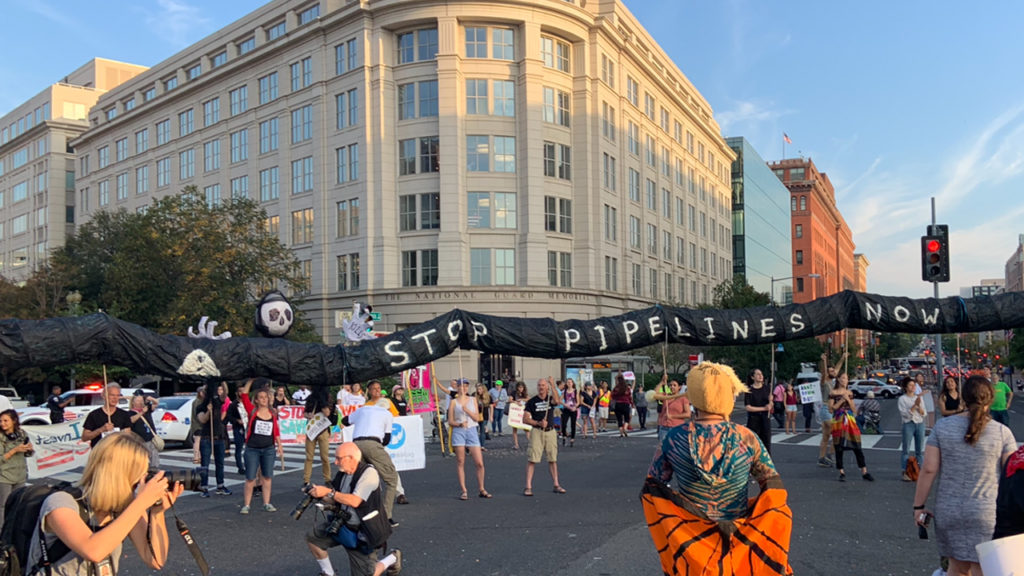 Shut Down DC activists have disrupted Monday morning’s commute at intersections across the nation’s capital to demand urgent action to address climate change.

REV. LENNOX YEARWOOD: So it’s critical for us to stand up and make sure that we have to do what was done before— from the gay rights movement to the civil rights movement to women’s rights movements— to make things awkward, make things uncomfortable, make things in a way that we have to stand up. Listen, when there were folks at the lunch counter in Greensboro, when four young brothers who came from North Carolina A & T [College] and they went to the lunch counter, listen, I’m sure those who were eating their breakfast that morning didn’t want to see four black guys here at the counter. They were more than apt to drink their coffee and eat their eggs, but if we had let them be comfortable, we would still having a segregated society.

PROTESTORS: What do we want? Climate justice. When do we want it? Now!

JAISAL NOOR: These actions are building on Friday’s youth climate strike, which brought four million people to the streets in more than 150 countries around the world. These actions in DC are happening as world leaders meet at the UN in New York for high level meetings to take concrete steps to address the climate threat. On Sunday, 130 banks that hold $47 trillion in assets, one third of the global banking sector, said they would align their business goals with the Paris agreement, but activists say this is not enough and that the Trump administration has advanced policies that threatened the climate.

NIRANJALI AMERASINGHE: Take action. Take climate change seriously. The United States is so responsible for this problem, it’s time that we actually did something about it. Well, it’s the communities who have done the least to contribute to this problem who are being hit the hardest, and we owe it to them to stop, to stop climate change as quickly as we possibly can.

JAISAL NOOR: The activists are from a coalition of groups— including Black Lives Matter, 350.org, and Extinction Rebellion— who have carried out a civil disobedience campaign across the UK for the past nine months.

JAISAL NOOR: Activists said they aim to bring DC to a standstill to send a strong message that inaction or denial of climate change is no longer acceptable. The Trump administration has sought to withdraw from the Paris Accord and roll back regulations on fossil fuel extraction and emissions. They say they will continue a week of action until policymakers take warnings by the UN and climate scientists seriously.

CLIMATE PROTESTOR: We care about the next generation and generations to come to leave a good environment and home for them and we’ve been given a very short timeline. Even before, we were given just 12 years. It was clear that because of what’s happening in the climate, there’s things that are happening that we don’t have any more time. There’s a climate emergency. It’s an absolute emergency. So we don’t have time to just go about business-as-usual like we’ve been doing every day, in this so-called developed world.

JAISAL NOOR: With Cameron Granadino, this is Jaisal Noor in Washington, DC.