Does the UK Need Donald Trump, or does America Need Jeremy Corbyn?

In Part 1, TRNN correspondent Jaisal Noor speaks to Brits about their views on the U.S. president, Brexit, and more

In Part 1, TRNN correspondent Jaisal Noor speaks to Brits about their views on the U.S. president, Brexit, and more 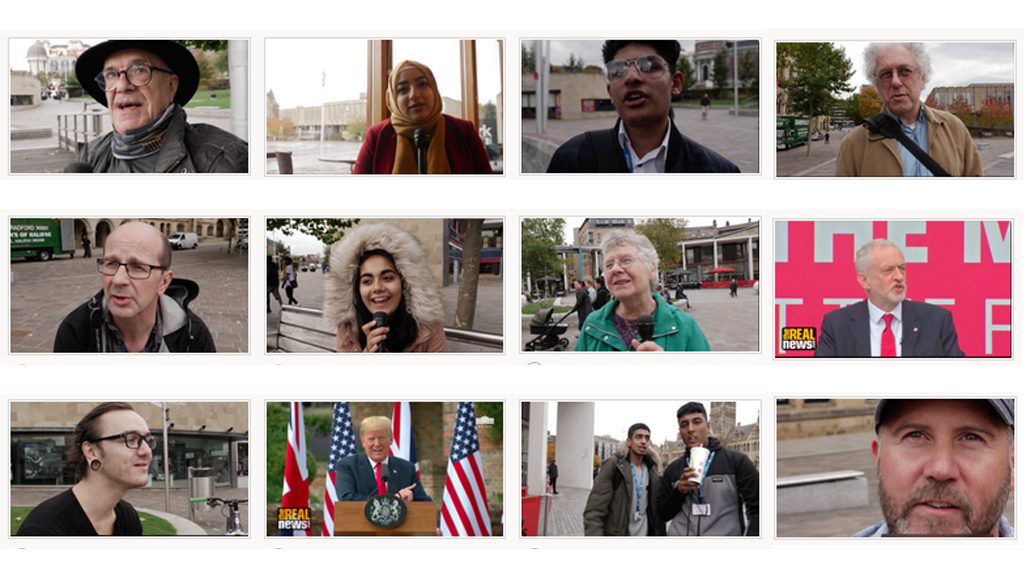 JAISAL NOOR: It shouldn’t come as a big shock that many in Bradford, England don’t like U.S. President Donald Trump. Hundreds of thousands protested his recent visit to the UK, and more than 60 percent say he makes the world a more dangerous place.

BRIAN PUNTER-MATHEWS: He’s effectively going to cause a war at some point.

JAISAL NOOR: I asked the people here for their opinions on a wide range of issues. I started off by asking if the UK needs President Donald Trump, or if the U.S. needs Jeremy Corbyn, the head of UK’s opposition Labour Party who’s been compared to Bernie Sanders.

JEREMY CORBYN: People want a country run for the benefit of the many, not the few.

JORDAN: If I had to say one, I would say that America needs Jeremy Corbyn. But personally, I feel that America will be better with Bernie Sanders.

ALLISON EDWARDS: The UK doesn’t need Donald Trump. We’ve got enough problems as it is, thank you.

JAISAL NOOR: And does America need a Jeremy Corbyn?

FAISAL: England needs Jeremy Corbyn. Donald Trump is not welcome here. Because what he thinks is all about himself, and he just likes to mess the economy up.

REHMAN: Like, he destroyed America. We don’t want racism in our England. We all get along very well. And I want Jeremy Corbyn to come here and be England’s leader, or president.

JAISAL NOOR: What about the U.S.? Does the U.S. need a Jeremy Corbyn?

JAISAL NOOR: But I did speak to one person with a very different take.

JAISAL NOOR: What do you like about Donald Trump?

JAISAL NOOR: In July 2016, a majority of voters in Bradford, as across the United Kingdom, voted to leave the European Union.

NIGEL FARAGE: We’ve got our country back.

JAISAL NOOR: With Brexit now just six months away, Britain remains deeply divided. Negotiations are ongoing, but it’s unclear if a deal will be reached between the European Union and Prime Minister Theresa May.

THERESA MAY: By working intensively and closely we can achieve that deal. I believe a deal is achievable. Now is the time to make things happen.

JAISAL NOOR: On Saturday over half a million people marched in London, demanding a new vote on the final Brexit deal something the Prime Minister has ruled out.

JAISAL NOOR: Talk about why you voted for Brexit.

PARTON: Because we don’t want to be ruled by the people that we beat in the last war. That’s what it’s all about.

JORDAN: I voted to stay. I think considering dropping the pound, the way Brussels are treating parliament, and the possibility of a no deal scares, scares the hell out of me. I hope that we do get a vote on the final deal and what’s to come, but we’ve got to wait and see at this point, I guess, don’t we?

SAMAYYA AFZAL: So I think it’s a combination of issues. I think when you are faced with a system where you don’t feel heard, people use the means or the opportunity that they have to send a message. I think a lot of people did use the Brexit vote to do that.

BRIAN PUNTER-MATHEWS: Well, I actually voted to leave, because I couldn’t believe anybody would be stupid enough to leave. And what I didn’t want it to be is a 100 percent whitewash of ‘remain.’ I wanted there to be some kind of voice saying hey, we’re not happy.

ALLISON EDWARDS: I’m frightened about how it’s going to affect poor people, most of all. How it’s going to affect them. I’m very scared of it. I don’t want it to happen. I like being part of Europe, and I’m European, citizen of the world. And I don’t like what we’re going through. I’ve been depressed about it for two years. It worries me.

JAISAL NOOR: Why did so many people vote to leave?

JAISAL NOOR: It was a colonial relationship.

PARTON: It was colonial at the time. Now they’re independent, but they’re still part of the Commonwealth.

GRAHAM HARDY: Well, the appeal of ‘leave,’ I should imagine, is people are harking back to some idea of what Britain used to be like, in some golden age which never really existed. Or if it did exist, it existed on the backs of people who were oppressed by Britain.

PARTON: And we’re getting far too many immigrants in. They’re just coming in from [inaudible], you know. They don’t have to work. They come straight in and start drawing money. And that’s not on. Not on.

PARTON: Exactly. I mean, you don’t mind it, to a degree. But all we’re getting at the moment, I think, is freeloaders. You know? We don’t like that. We want our country back, as it was.

SAMAYYA AFZAL: Bradford is a city where we have had a lot of immigration. My own family are immigrants. I’m a third-generation immigrant myself. So people tend to have concerns around who can come to the UK, and how easy it is for people to come to the UK. So you had a lot of people that I spoke to, a lot of businesses, said if we vote for Brexit, then it will be more likely for us to, for our kind of compatriots, or people from our background, across the Commonwealth, will be able to come here easier. It’s certainly not going to be the case that the UK can limit migration from certain areas and increase migration from other areas. That’s not all we’re seeing, you know, happen in practice afterwards, anyway.

JAISAL NOOR: Stay tuned for the next installment of this report at TheRealNews.com.

From Bradford, England, this is Jaisal Noor.