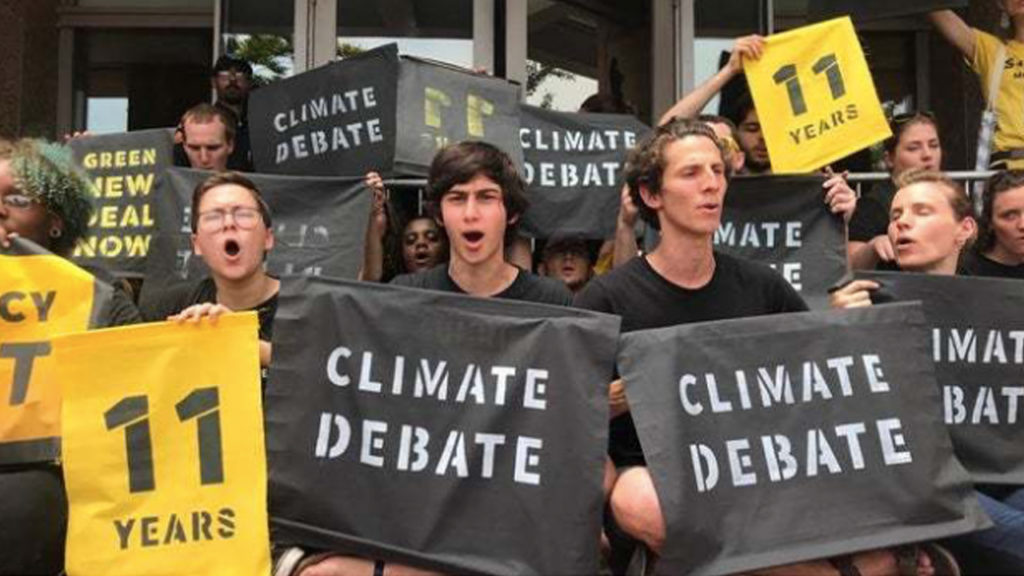 DHARNA NOOR It’s The Real News. I’m Dharna Noor in Baltimore, the Democratic National Committee rejected a proposal to hold a candidate debate focused entirely on the climate crisis. At a meeting in San Francisco on Thursday, DNC officials voted 17 to 8 on the proposal and when they did, protesters with the youth live climate organization, the Sunrise Movement interrupted the meeting to ask the question… (singing).

Climate organizers did score a smaller victory. Previously the DNC prohibited all the candidates from participating in climate forums that they hadn’t sanctioned. But at this meeting, the resolutions committee voted to reverse that ban, and to sanction a less formal climate forum.

Still every major democratic contender has publicly supported the proposal for a climate debate and polls show that climate policy was actually the number one issue that voters wanted to hear about in the first debate. So what happened? Joining me to talk about this now is sunrise movement trainer Carmen Bouquin, who is joining me from San Francisco. Thank you so much.

CARMEN BOUQUIN Yes, thank you so much for having me.

DHARNA NOOR So I should say, obviously before we get started, the stakes here could not be higher. The Amazon is burning at a record rate. The Amazon’s a big carbon sink, so it helps the earth fight climate change. Ice sheets are melting in Greenland of the Arctic, Arctic wildfires are raging and breaking records. So with all that as a backdrop, you were there in the room for this meeting along with some 350 other members of the public. What was it like to be there when the resolution got rejected and why you think it did?

CARMEN BOUQUIN Yeah, it was actually a really painful meeting because it was like two hours of them debating specific clauses within the specific resolution and I think it was really discouraging because this is a campaign that not just Sunrise, but all of these environmental organizations had been working on for the past couple of months and pushing candidates to hold the climate debate. And we have so many candidates and supported it. And so to hear like DNC representatives vote no and so many of them that did was really discouraging. And I think a lot of youth felt unheard and not listened to.

DHARNA NOOR For sure. And of course, you know the DNC did project this resolution, but they did also reverse the ban on candidates participating in non-sanctioned climate forums. DNC chairman Tom Perez instated that ban after he got an open letter from Washington governor Jay Inslee calling for a climate debate instantly just announced that he’s dropping out of the democratic primary on Wednesday. But anyway, what exactly will that DNC resolution that past due and is that a victory for y’all in any sense?

CARMEN BOUQUIN Yeah, so that resolution basically allows the CNN town hall and MSNBC town hall that’s happening on climate change to exist and for candidates not to be punished for it. It was like kind of a ridiculous rule in the first place that candidates would be punished if there was a climate debate. And so that was a small victory and we’re really excited to see how candidates react at those town halls and what their plans are. But we still believe that I’m a climate debate is going to show the full enormity of the plans and we still believe that a climate debate should happen, but we were excited about the small victory for sure.

CARMEN BOUQUIN Yeah, there was another resolution that we were really excited for. It was like a resolution 30 and it was about the platform of the DNC and making it so that the DNC could mandate single issue debates based on the platform of the DNC and that was something that Christina Pelosi had reformed during the meeting to kind of adhere to some feedback from the climate debate resolution that said that if we debate climate change, then we should be able to have a debate about healthcare and immigration.

And Christina Pelosi was like, “Absolutely, we should have those and we should have them based on the DNC platform.” Unfortunately, that resolution was also the… the aspect of the resolution about making parts of the platform of the DNC into a debate, that was voted down. And so that was discouraging as well. Because we want to see the candidates debate as many things as possible and as many issues as possible. And so that was also discouraging.

DHARNA NOOR Yeah, it’s interesting. So speaking of that, that talking point that if you sanctioned this debate, will we need to sanction other single issue debates. That was something that Simone Sanders took up. So I was watching the live stream of this DNC conference today and Simone Sanders talking, which is kind of a really wild moment for me. She’s a top advisor to Joe Biden’s campaign who today came out staunchly. She came out staunchly against the climate debate resolution.

SIMONE SANDERS To call for a public in and of itself may sound good, but at the end of the day, we actually cannot exert the power over the network to do what we would like to do.

DHARNA NOOR So a couple of things going on here. She said that networks might not comply with the DNCs call for a climate debate if they did support it. She said a town hall’s a better format. As you just said, both MSNBC and CNN have already planned climate town halls, but way fewer people watch those than debates, obviously. Simone Sanders works for Joe Biden who publicly endorsed the call for a climate debate. What did you make of her comments today?

CARMEN BOUQUIN Yeah, I think that was pretty confusing because Biden has come out in favor of a climate debate and it seems like a lot of folks at the table today got caught up in process and precedent. And didn’t really focus on the emergency at hand of the climate crisis and the fact that the climate crisis impacts every aspect of our society and every issue.

And so that was kind of confusing to hear that coming from her because Biden had had endorsed the climate debate. And it also is just not true. Climate change is an intersectional issue that impacts all of our lives and it needs to be discussed in full and we need to know what the presidential candidates think and what their plans are.

Every realm of society is going to be impacted by climate change. And the people that are being most impacted are the most vulnerable. And it seems like it’s being ignored and it has been ignored for so long that we thought that the climate debate could be something that they actually draw attention to that. But obviously they aren’t recognizing that.

DHARNA NOOR Yeah, it’s interesting in sort of a poetic, sort of display of difference here, Simone Sanders used to work for Bernie Sanders, who today put out this really huge ambitious green new deal proposal. And it calls to decarbonize the U.S. Completely by 2050, which that’s a deadline that a lot of other candidates have said they’d stick to.

But it also calls to decarbonize transportation and energy sectors by 2030. It calls to ban nuclear energy. Those proposals aren’t so common in other candidates plans. So it seems like there are still some pretty big differences that need to be hashed out between these candidates, especially on climate policy. So is a town hall forum enough to do that? Is that sort of informal forum like the one that the DNC voted for today, sufficient to take on all of those huge questions?

CARMEN BOUQUIN Yeah, no. And that’s why we wanted a climate debate is because we want candidates to be able to debate in full all of those plans and be able to push each other and develop plans like Bernie Sanders. We even saw that today, DNC representatives were saying that, that just having a discussion on climate change is not enough. We need a debate and we need to see how candidates stack up and what their plans are.

There was a lot of discussion on how we can change how debates are run and not have them run by large new sectors like CNN, but having them more controlled by the people. And that was like also a focus of the climate debate is we wanted that to happen.

DHARNA NOOR Sure. I should disclose here for viewers of The Real News Network, I did donate 27 dollars to Bernie Sanders campaign, so if that makes you take nothing that I’m saying here seriously, that’s your prerogative.

But anyway, so what is the next move for Sunrise Movement now that a DNC sanction climate debate seems to kind of be off the table. What do you all plan to do now to encourage real debate amongst candidates on how they’ll address the climate crisis and could these town halls or these multi issue forums play into that at all?

CARMEN BOUQUIN Yeah, we’re definitely going to encourage candidates to debate in full at those forums and all candidates to go. Kamala Harris had originally said that she wasn’t going to go and some of our people and environmental activist pushed her to go. And so we’re making sure that all of these candidates are being pushed in the biggest way possible. But the Sunrise Movement is going to keep going. We have three huge summits planned around the country, including one this weekend in the Bay area for all of the West.

DHARNA NOOR Got it. And I guess I’ll just close by asking you, today was just an initial meeting for the DNC. This coming weekend, they’re going to be taking on final votes on all these resolutions. What do you expect to see from that meeting this weekend and what do you hope that the DNC votes up votes down?

DHARNA NOOR All right. Well as we see what comes out of this weekend and continue to follow the candidates proposals and plans to take on the climate crisis, we’d love to talk to you again. Carmen Bouquin, you’re a trainer and an organizer with the Sunrise Movement based in California. Thank you so much for being on today.

CARMEN BOUQUIN Yes, thank you so much.

DHARNA NOOR And thank you for joining us on the real news network.

BABATUNDE OGUNFOLAJU Thanks a lot for watching. Appreciate it. But do us one more solid favor, hit the subscribe button below. You know you want to. Stay up on new videos.

Carmen Bouquin is a trainer with the Sunrise Movement. She’s based in central California.