In a highly contradictory move, Attorney General Jeff Sessions is telling California that only the federal government has the authority to regulate internet service, while at the same time maintaining that it cannot (will not?) regulate it either. We speak to Ernesto Falcon, legal counsel of the Electronic Frontier Foundation

In a highly contradictory move, Attorney General Jeff Sessions is telling California that only the federal government has the authority to regulate internet service, while at the same time maintaining that it cannot (will not?) regulate it either. We speak to Ernesto Falcon, legal counsel of the Electronic Frontier Foundation 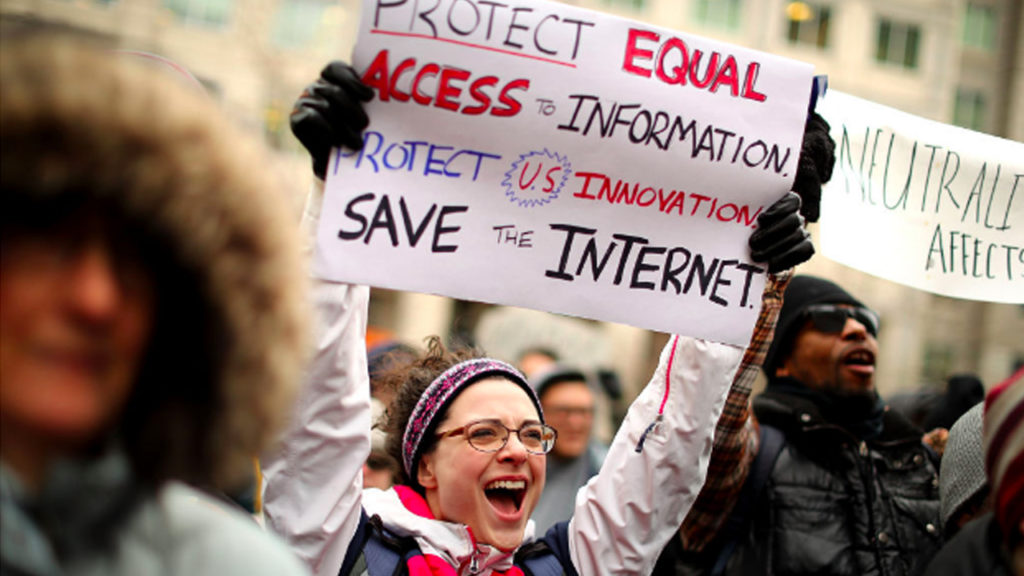 Right after California’s Governor Jerry Brown signed a law to guarantee net neutrality in his state last Sunday, the Department of Justice filed a lawsuit against California to stop the law. According to Attorney General Jeff Sessions, California’s net neutrality bill is unconstitutional because Internet traffic involves interstate commerce. And according to the Constitution, the federal government regulates interstate commerce.

Also, representatives from the Internet Service Provider industry argue that they cannot possibly be expected to adhere to 50 different Internet traffic regulations. Thirty states across the U.S. are already considering bills that would guarantee net neutrality. Joining me now to make sense of what is going on with net neutrality is Ernesto Falcon. He is the Legislative Counsel for the Electronic Frontier Foundation, a membership-supported digital liberties organization that was founded in 1990.

GREG WILPERT: Thanks for joining us today, Ernesto.

ERNESTO FALCON: Thank you for having me.

GREG WILPERT: So what’s going to happen now? California’s net neutrality law is supposed to go into effect on January 1, 2019. But will the court stop the law, and what do you expect to happen with this?

ERNESTO FALCON: So right now, what’s happening is the Department of Justice has filed a preliminary injunction against the state of California. Preceding this case and this litigation, about 22 state attorney generals and a number of different companies have sued the FCC to strike down the Restoring Internet Freedom order, which is the original decision to repeal net neutrality. So you have two litigations that are kind of moving in parallel, and the judiciary will have to kind of decide how to sort that out.

It’s notable that the DOJ, the Department of Justice, really central to their argument is that the California state has to be on pause until the federal litigation resolves, rather than arguing that the states outright can’t do this. I think it’s wrong for the opponents of net neutrality to argue that there is some sort of categorical bar to state action in this place. I don’t think that’s true. There’s lots of places the states regulated or issued protections that address the ISP industry historically, and this is just a new frontier.

ERNESTO FALCON: Well, the outcome or the ultimate objective of everyone who’s fighting for net neutrality is to restore the uniform federal rules we had as of 2015. The problem is; AT&T, Comcast, Verizon went the FCC asked the agency to get rid of all of that. And so, they’re the reason why we have all these states fighting, because they are the ones that got the federal government to say, “We’re no longer regulating or have any authority over these broadband cable and telephone companies.”

So a major contradiction for the attorney general is stating that the Congress and the federal government is regulating this space. The opposite has happened. The FCC says, “We have no authority here, we will no longer regulate, and we cannot do anything really to discipline these actors.” And if the situation is there’s a complete absence of federal regulation rules in this place, the state’s ability to react in that space is actually empowered.

GREG WILPERT: So basically, what you’re saying is that there’s a contradiction there, that they’re trying to have their cake and eat it too. In other words, saying that the states cannot regulate it, but the federal government isn’t going to regulate either. Is that right?

ERNESTO FALCON: I mean, that’s the main argument that state attorney generals have filed against the FCC in regard to their effort to block state laws in its place, what’s called a preemption of state laws. The state attorney general’s laws a number of legal experts have filed to the D.C. Circuit, saying, “You cannot possibly state you have no authority to issue rules or conserve protections over the ISP industries, yet have great authority to block states from doing that in your place.” They both have to exist at the same time, the authority to regulate and the authority to preempt states.

GREG WILPERT: So looking a bit further ahead, couldn’t the Department of Justice’s decision to file a suit against California backfire, and this whole process? That is, if they and others file suit, like you said, against states and organizations such as yours, and other states filed suit against the FCC, there would be so much regulatory uncertainty created that the ISPs will eventually perhaps say, “Hey, we’d rather have a national law favoring net neutrality instead of this regulatory chaos.” What do you think?

ERNESTO FALCON: I think that’s really a big part of the fight here. The states are not the final solution to all of this. I think everyone from all the nonprofits and the small businesses and activists across the board all want to see the restoration of the federal rules we had in 2015. So the ISPs are the ones that are at the disadvantage here. AT&T, Comcast and Verizon have to decide, despite the fact that they only have about 15 percent support, are they going to continue to push the minority of legislators and policy makers they have in D.C. to retain the Restoring Internet Freedom Order, the decision from the FCC to repeal net neutrality?

Or, are they going to give that up? Are they going to surrender to the fact that they are completely outnumbered by public? And whether they do it willfully or we’re going to have to go through them at the end of the day, that remains. That’s your choice. We remain committed to fighting until we finally have a full restoration of net neutrality and full restoration of the 2015 Open Internet Order, and to ensure that the Internet remains a free and open platform as a matter of federal law.

GREG WILPERT: Well, we’re certainly going to continue to watch this very interesting fight. I was speaking to Ernesto Falcon, Legislative Counsel for the Electronic Frontier Foundation. Thanks again, Ernesto, for having joined us today.

ERNESTO FALCON: Thank you for having me.

Ernesto Falcon is the Legislative Counsel for the Electronic Frontier Foundation, a membership supported digital civil liberties organization that was founded in 1990. He represents the organization on Internet policy, intellectual property, and privacy issues before Congress and the state legislatures. He was heavily involved in effort to pass S.B. 822, California’s net neutrality legislation.