At the second US presidential debate, Senator John McCain once again raised the specter of a renewed Cold War, displaying a very confrontational position towards Russia. Even Senator Barack Obama accused Russia of promoting "mischief around the world". McCain doesn't seem to be listening to his own heroes - certified Cold Warrior Henry Kissinger, who advises him, and counterinsurgency ace Gen. David Petraeus.

At the second US presidential debate, Senator John McCain once again raised the specter of a renewed Cold War, displaying a very confrontational position towards Russia. Even Senator Barack Obama accused Russia of promoting "mischief around the world". McCain doesn't seem to be listening to his own heroes - certified Cold Warrior Henry Kissinger, who advises him, and counterinsurgency ace Gen. David Petraeus. 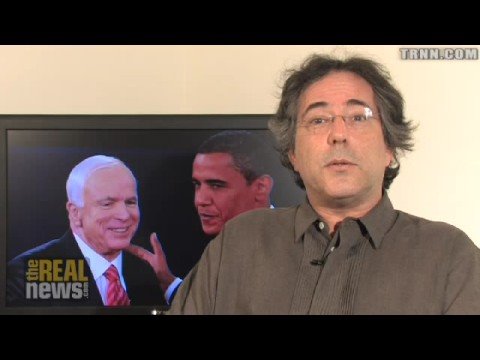 SEN. JOHN MCCAIN (R-AZ), US PRESIDENTIAL CANDIDATE: Have no doubt that Russia’s behavior is certainly outside the norms of behavior that we would expect for nations which are very wealthy, as Russia has become because of their petrodollars.

MCCAIN: He has exhibited most aggressive behavior, obviously, in Georgia.

ESCOBAR: Oops. It was Georgia, coached by McCain adviser Randy Scheunemann, that invaded and destroyed the capital of South Ossetia. Russia reacted with a counterpunch.

MCCAIN: —said before, watch Ukraine. Ukraine right now is in the sights of Vladimir Putin, those that want to reassemble the old Soviet Union.

ESCOBAR: Oops. Viktor Yushchenko, America’s man in Ukraine, is supported by only four percent of the voters ahead of the next elections. Prime Minister Yulia Tymoshenko, she has warned against hostility to Russia and against any retaliatory measures against Russia’s Black Sea fleet, based in the Crimea in the Ukraine. And recent polls show that Ukrainian citizens prefer integration with Russia and other CIS countries [Commonwealth of Independent States] to that with European and Euro-Atlantic structures. According to the Ukrainian National Academy of Science Sociology Institute, only 17 percent of Ukrainians want to join the European Union.

ESCOBAR: Penalties. McCain wants to expel Russia from the G8 and create a league of democracies—that sounds like a Marvel comic—to bypass the United Nations Security Council. And that’s an idea the European Union diplomats in Brussels, they call it a bad joke. Moreover, a Gallup poll has shown that the majority of people in every country, from Azerbaijan, Georgia, and Ukraine to the Central Asian ‘Stans, they want a partnership with the CIS, the Commonwealth of Independent States.

MCCAIN: We will use the leverage, economic, diplomatic, and others, and united with our allies, with our allies and friends in Europe, who are equally disturbed.

ESCOBAR: McCain forgets that Europe depends on Russia for oil and gas. There’s a tremendously complex negotiation going on in Brussels for more than a year now to define the rules of cooperation between the EU and Russia. Besides, Russia’s considering selling oil and gas in Euros, and they’re also considering making the ruble convertible into gold. Does Obama also subscribe to McCain’s cartoon politics? Well—.

SEN. BARACK OBAMA (D-IL), US PRESIDENTIAL CANDIDATE: Energy is going to be key in dealing with Russia. If we can reduce our energy consumption, that reduces the amount of petrodollars that they have to make mischief around the world.

ESCOBAR: And then there’s something about evil.

OBAMA: I think they’ve engaged in evil behavior, and I think that it is important that we understand they’re not the old Soviet Union, but they still have nationalist, you know, impulses that I think are very dangerous.

MCCAIN: If I say yes, then that means that we’re reigniting the old Cold War; if I say no, it ignores their behavior.

ESCOBAR: Mischief around the world, evil behavior, evil—wasn’t that Saddam, al-Qaeda, Iran? Oops. The Cold War as well, of course. So let’s see what two cold warriors, certified cold warriors, have to say about all this. Henry Kissinger, George Shultz, former secretaries of state, couldn’t be more clear: "This drift toward confrontation must be ended. However appropriate as a temporary device for showing our concern, isolating Russia is not a sustainable long-range policy." (Henry A. Kissinger and George P. Shultz, "Building on Common Ground With Russia," The Washington Post, October 8, 2008.) And what about the European allies? "Even much of Western Europe is uneasy about such a course." Kissinger and Shultz, they want to deal with Russia as a strategic partner. They understand that getting NATO at the gates of Saint Petersburg is not exactly swell: "Moving the East-West security line in a historically short period, 1,000 miles to the east while changing the mission of NATO and deploying advanced weapons technology on the territory of former Soviet satellites was not likely to be met with Russian acquiescence." So they want to talk without preconditions—very dirty word in McCain’s lexicon. "We believe that the fundamental interests of the United States, Europe and Russia are more aligned today—or can be made so—even in the wake of the Georgian crisis, than at any point in recent history." Is McCain listening? Henry Kissinger is advising John McCain, and he’s also advising Ms. Alaska as well. They met recently in New York for the first time. Are they listening? And is McCain listening to his own oracle, General David Petraeus?

DAVID PETRAEUS, US GENERAL: I do think you have to talk to enemies. I mean, again, you’ve got to set things up, you’ve got to know who you’re talking to, you’ve got to have your objectives straight, all the rest of this stuff. I mean, so I’m not trying again to get into the middle of domestic politics.

ESCOBAR: There’s still one more debate to go. Will McCain and Obama admit that the US economy will get much worse before it gets better? Will they stop demonizing Russia? Will they admit that China is financing the war in Iraq—and a lot more, for that matter? And will they even pronounce that fateful word "China"?

"That one" moment reveals McCain’s dark side