Cracks in the Wall: Beyond Apartheid in Palestine/Israel

Ben White discusses his new book Cracks in the Wall, it examines narratives that challenge the Israeli colonization of Palestine and their recent successes

Ben White discusses his new book Cracks in the Wall, it examines narratives that challenge the Israeli colonization of Palestine and their recent successes 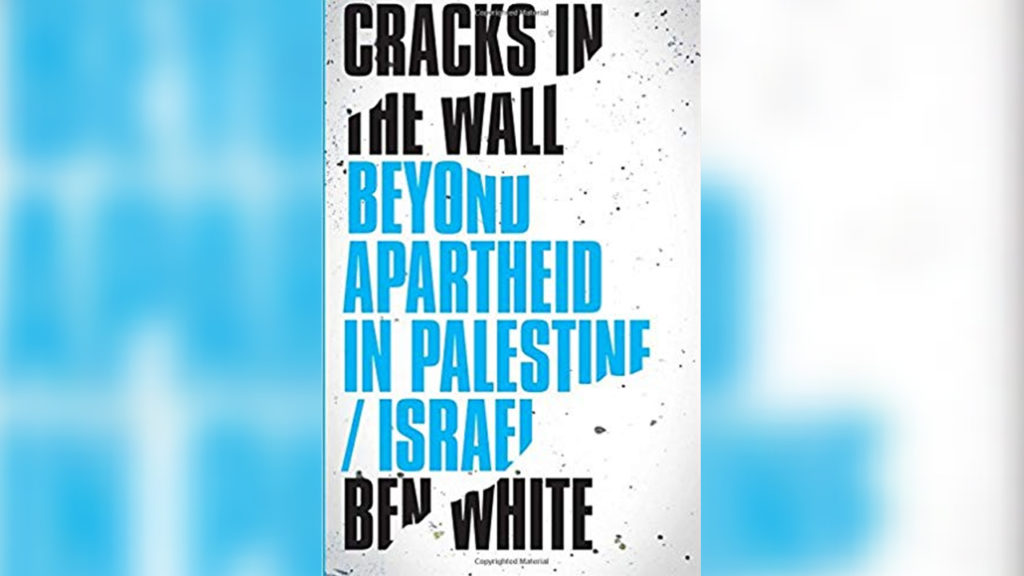 A new book called Cracks in the Wall: Beyond Apartheid in Palestine-Israel was published recently. Rather than tackling the century long story of Zionist and Israeli colonization of Palestine apartheid and military occupation. The book focuses on the events of the last couple of years. Now, if we see how Israeli Prime Minister Netanyahu is greeted by right-wing world leaders who look at the policies of U.S. President Donald Trump, who moved the U.S. Embassy to Jerusalem; if we look at the Israeli military using live sniper fire to kill unarmed Palestinian demonstrators in Gaza, things look very grim for the Palestinian cause. Nevertheless, this is a very optimistic book. It really is about the cracks in the wall, signs that decades of struggle are starting to make a dent in the Israeli repression machine.

We’re joined by the book’s author, Ben White. Ben White is a journalist, analyst, and author specializing in Palestine-Israel. He has published hundreds of articles in various international outlets, and he published four books, the latest of which is Cracks in the Wall: Beyond Apartheid in Palestine-Israel by Pluto Press. Thank you very much for joining us, Ben.

BEN WHITE: Thanks for having me on.

SHIR HEVER: So, Ben, let’s talk about the international aspect of are those cracks in the wall. You’ve dedicated a whole chapter of your book to the BDS movement, Boycott, Divestment, and Sanctions. But the Israeli government has made several statements recently that BDS has all but disappeared, that it has no impact on the Israeli economy. Can you give us maybe a counterexample about the success of the BDS movement?

BEN WHITE: To sort of assess the BDS movement’s success, there’s a few different perspectives there are important. Of course, in 2005 when it was launched through to now it’s become a genuinely global, international civil society-based movement. It’s picked up a lot of traction from students, academia, culture workers and artists, and also amongst activists, local community activists in various countries and communities in cities around the world. There have, of course, been specific economics-focused divestment or boycott successes in relation to, say, Veolia, the French multinational G4S companies that have been targeted because of their complicity in the Israeli occupation of the West Bank and the Gaza Strip and East Jerusalem.

But the angle that Israeli officials and some pro-Israel advocates take, which is that BDS has been ineffective, and the Israeli economy is strong and so forth, to my mind miss the point about the real purpose and success of the BDS movement to date, which is about changing a conversation, particularly in many important Western contexts; changing conversation about … Reframing the whole so-called conflict is a big part of what’s happened, away from the sort of discourse of the so-called peace process and the problematic framing that the Oslo process brought in, more into a framing of apartheid, settler-colonialism, and so forth. And also brought into the conversation the issue of accountability, which is to my mind the one thing that the Israeli government, the Israeli state, fears about the BDS movement the most; the issue of accountability, putting accountability on the agenda. And the conversation has changed in many important civil society sectors in the West and elsewhere to be how best to tackle Israeli violations of international law and human rights, not whether they occur. And in many areas, of course, people have reached that conclusion and agreed and sort of heeded that call from Palestinian civil society that the best way to tackle those abuses is through some form of boycott and divestment.

And this is by no means a battle that’s been won, and of course there is an important Israeli counteroffensive against it. But more and more what you see is the exception that has always been made about Palestine, the exception that’s been made here that Israel can’t be held to account like other governments and actors are held to account, that exception is starting to be eroded. And from Israel’s point of view that’s that’s a serious problem. It’s legitimately referred to by Israel as a strategic threat; a strategic threat in the sense that it threatens the apartheid system.

SHIR HEVER: Let’s talk a bit about the biggest ally of Israel, the United States. You actually have two chapters in your book which address this, one talking about U.S. government policy, the other talking about Jewish communities; not all of them are in the United States, but specifically in the United States there is a very clear trend of these communities splitting up over the issue of Palestine-Israel. But you know, opinions are one thing. What do you think can really happen in practice? Do you think, for example, that it would be realistic to expect that the U.S. will stop military aid to Israel?

BEN WHITE: Right. The short answer to the question you finished with is no, at least not in the short term. Because, of course, the relationship between the U.S. and Israel is multilayered, multifaceted, and exists for different reasons; geopolitical, economic, and so forth. But a key part of that relationship and a key part, particularly of, sort of, let’s say, public support for that relationship has been the position of the Jewish American community, of Jewish American establishment groups and community groups. The official Israeli leadership groups. And the tensions that have been exposed in recent years, these are tensions that sort of relate to and are symptoms of much longer developing trajectories. This is not an overnight process. It’s partly generational. There’s a generation of younger Jewish Americans who are related to Israel in a very different way to their parents and their grandparents, and so forth.

But it’s not purely generational. You have–there’s a lot of manifestations of this, of this phenomenon in groups like Jewish Voice for Peace, for example. For the sake of time, skipping to the issue of the Democrats, you have now, again, nobody needs to [inaudible]. There’s no point kidding ourselves. We’re not talking about any seismic shifts in policy terms yet. But the things that you would expect to have to happen in order to reach policy changes are happening at this stage, in terms of the journey that we can sort of see unfolding. And it’s now starting to manifest at the top level, right, with the latest congressional intake in the midterms. And you start to see that starting to shift in the last few years. And it’s not just related to, for example, the animus between Obama and Netanyahu. It’s actually the fruit of many, many years of hard work by Palestinian Americans, their allies, and so forth, at the grassroots level in the U.S. And that’s starting to bear some fruit, even in sort of establishment liberal political contexts.

SHIR HEVER: Yeah. And your book is full of examples of that, so if anyone wants to get into the details, I recommend reading the book. But I wanted to ask you about Chapter 6 in your book, which in my opinion is the most important chapter, because after all, no one is going to fight the fight of Palestinians for freedom for them; not the small progressive Israeli groups within, not the solidarity groups scattered around the world. It’s a Palestinian struggle for freedom. And what do you see is happening in Palestinian society now which justifies your argument that there are cracks in the wall? What are the Palestinians able to do that is actually challenging the Israeli authorities?

BEN WHITE: Well, I mean, that’s kind of where the disparity or the distinction I want to make is important, because the cracks in the wall that I do talk about are primarily internationally based, primarily Western based. And that’s a reflection of–and the reason why they have strategic significance is a reflection of the way in which Israel has been shielded and supported and funded and so forth by those Western governments.

On the ground in Palestine, as I mentioned earlier, actually, the situation’s pretty pretty awful. Now, Chapter 6, as you mentioned, where I talked about green shoots and signposts that have emerged in recent years amongst Palestinians are important and vital for us to know about. And I talk about things like the solidarity actions that have taken place around prisoners’ hunger strikes, for example, the activism that took place to protest the dispossessions of Bedouin Palestinian citizens in the Naqab, the so-called Prawer Plan, activism that’s taken place in the Gaza Strip amongst youth, and so forth. So there’s a lot of manifestations of this–the battle of the gates in Jerusalem now, you know, a year and a half ago.

But they’re quite fragmented. And one of the reasons why these isolated examples of cracks in the wall can’t really gain momentum at the moment is because of structural political problems primarily to do with the politics of the Oslo process, the Palestinian Authority, the internal divisions between Hamas and Fatah. And of course, you know, goes without saying, the obstacles and barriers imposed by the Israeli occupation, and tools, repressive tools that are used, such as detention without trial, and so on.

So there are those really important examples that you can see unfolding all the time and that crop up in unexpected ways, often, of Palestinian activism, often youth-led. But until there are some significant shifts on the internal political level amongst amongst Palestinians themselves, it’s hard for those green shoots and signposts to sort of build into something bigger, which–as you quite rightly point out–is an essential part of the decolonization, and sort of, as you say, it will be primarily, of course, Palestinians who lead the liberation struggle themselves.

SHIR HEVER: Well, we’re going to have to leave it there. I’ve been speaking to Ben White, author of the new book The Cracks in the World: Beyond Apartheid in Palestine-Israel. Thank you very much, Ben, for joining us.

BEN WHITE: Thanks for having me on.