Joe Jamison of the U.S. Peace Council explains that the Pentagon is one of the world's worst polluters.

Joe Jamison of the U.S. Peace Council explains that the Pentagon is one of the world's worst polluters. 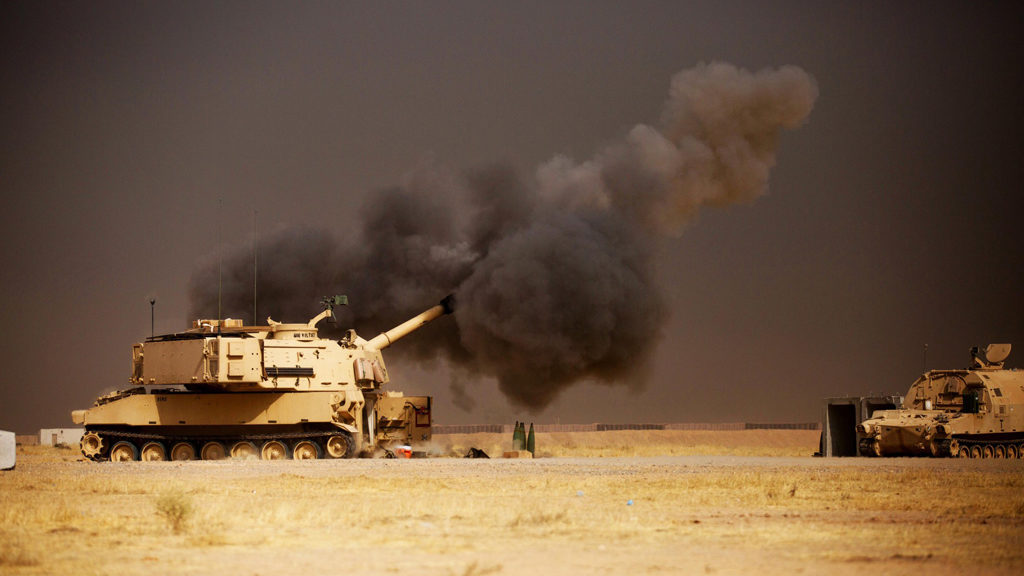 DIMITRI LASCARIS: This is Dimitri Lascaris reporting for The Real News Network from Herald Square in New York City. We are at the people’s mobilization against the US war machine and to save the planet. I’m here today with Joe Jamison of the US Peace Council, a member of the Executive Board of that organization. Thank you very much for joining me today, Joe.

JOE JAMISON: My pleasure. Glad to be here.

DIMITRI LASCARIS: So Joe, we were just chatting before we started our interview about the relative size of this crowd and the crowds we’ve been seeing so far in the last several days, not just in New York City, but across the world in connection with the climate strike. It’s interesting to see that at this stage, a rather small number relative to what we’ve been seeing in the streets last few days has shown up. What do you think this says about the level of awareness amongst the US population of the effects that militarism is having on the climate crisis?

DIMITRI LASCARIS: So for the benefit of our viewers, what should they take away from this protest today about the relationship between the climate crisis and militarism?

JOE JAMISON: Well, the anti-war movement has been trying to assert the linkage for a long time. The resistance I think frankly is on the other side. The environmental movement, or at least the dominant elements of it, don’t yet understand the linkage. And yet, the science is on the side of the argument that there is a profound linkage. So for example, last month Brown University produced this enormous study showing that the Pentagon is the major polluter in the world, and yet that got one or two days’ play in the media and then it disappeared. The media should be hammering away at that, and yet it doesn’t.

So we try to raise it as often as we can. It needs to be raised within the environmental movement as to the genuine causes of climate change. It’s not simply the oil industry. I’s not simply fossil fuel, excessive fossil fuel usage and the fact that the fossil fuel industry has bought the political party system and has bent it to its purposes. It’s also the war machine that squanders the usage of fossil fuel and produces all sorts of climate damage.

DIMITRI LASCARIS: The Democratic Party contest right now for the presidential nomination, you’re hearing a great deal about the climate crisis. What grade would you rank to the leading candidates, and let’s focus on the two that are perceived by the public to be the most progressive, Bernie Sanders and Elizabeth Warren. How would you rank them? How would you assess their positions with respect to militarism and defense spending? Do you think that they’ve taken sufficiently bold positions, and if not, why not?

They rarely raise those questions and I think an honest discussion of increased spending on social needs has to take up the question of where is the spending going to come? Where’s the revenue going to come from? Gabbard raises that question and discusses it. She says, “Take it out of the military budget.” So I think that she’s probably the most progressive candidate in the race, when she’s been excluded. In fact, I said that in my remarks.

DIMITRI LASCARIS: And just finally, switching gears, I want to talk to you about what is probably the biggest risk in terms of war confronting the world today given the current geopolitical climate, and that is the possibility of war between the United States and its Middle Eastern allies on the one side, and Iran and its allies on the other side. You know, we hear a lot about Iran. We are told that it is the world’s worst state sponsor of terrorism, that it’s an egregious human rights abuser, that it’s destabilizing the Middle East. What’s your assessment of Iran, and what is your prescription for how we should deal with Iran as Western citizens, and how our government should deal with Iran?

JOE JAMISON: I completely reject the dominant narrative with respect to Iran. I think President Trump committed a total act of folly by rejecting the Iran nuclear deal. The Iran nuclear deal was one of the few sane foreign policy initiatives of the Obama administration. He has boxed himself into a corner by rejecting it and now we’re reaping the consequences. I think the rise in tensions is exactly what we would have expected from the rejection of the Iran nuclear deal. And now the putting of US troops in Saudi Arabia only exacerbates the tension and even heightens the danger of war even further.

So I think the whole policy is misbegotten and misdirected and it’s moving in the wrong direction and things are getting worse. I’m hoping that the saner voices within the foreign policy community, including the Europeans who are trying to rescue the JCPOA, I hope those voices prevail. My fingers are crossed, but at the moment I don’t see much hope.

DIMITRI LASCARIS: The JCPOA being the nuclear deal with Iran, the United States, and the Western powers. Thank you very much, Joe. It’s been a pleasure talking with you.

JOE JAMISON: My pleasure. Keep up the good work.