At the Sanders Institute Gathering, Cornel West says of Lamont Hill, “All he's saying is that Palestinian babies deserve the same rights as Israeli babies”

At the Sanders Institute Gathering, Cornel West says of Lamont Hill, “All he's saying is that Palestinian babies deserve the same rights as Israeli babies” 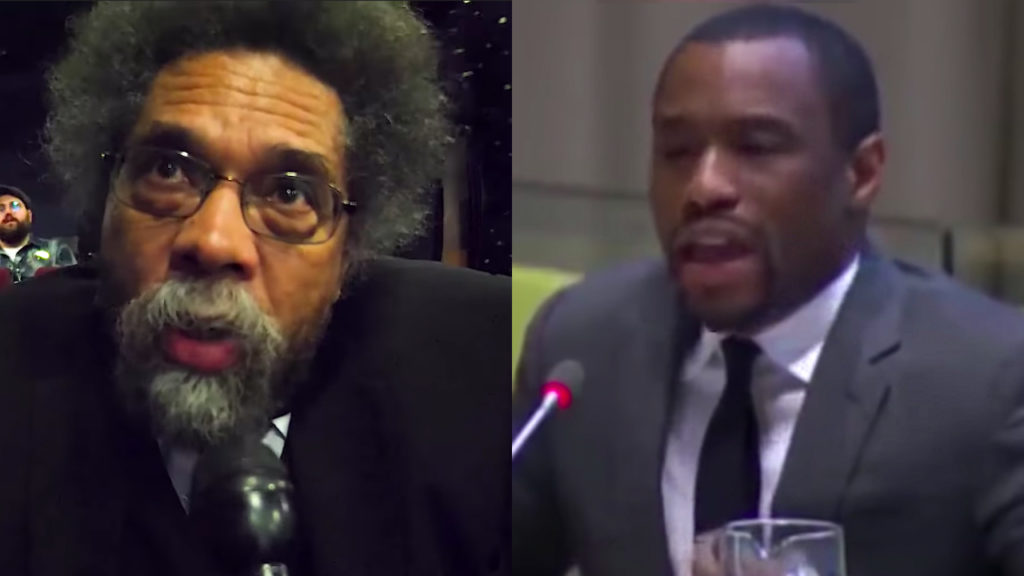 JAISAL NOOR: Supporters are coming to the defense of Temple University Professor Marc Lamont Hill, whose abrupt firing from CNN is causing backlash.

The news network let Hill go after a speech Wednesday during the UN International Day of Solidarity with the Palestinian People.

MARC LAMONT HILL: As we speak, the conditions on the ground for Palestinian people are worsening. In recent decades, the Israeli government has moved further and further to the right, normalizing settler colonialism and its accompanying logics of denial, destruction, displacement, and death. Despite international condemnation, settlement expansion has continued.

JAISAL NOOR: CNN might not be the only organization parting ways with Hill. Temple University, where Hill is a tenured professor, is reportedly also considering severing ties. In particular, critics noted the end of Hill’s speech.

MARC LAMONT HILL: So as we stand here on the 70th anniversary of the Universal Declaration of Human Rights, and the tragic commemoration of the Nakba, we have an opportunity to not just offer solidarity in words, but to commit to political action. Grassroots action. Local action. And international action that will give us what justice requires. And that is a free Palestine, from the river to the sea.

JAISAL NOOR: Critics say “a free Palestine, from the river to the sea” is a Hamas slogan calling for the destruction of Israel. But as Hill notes, the phrase pre-dates Hamas’ creation by decades; and Hill has consistently supported a one-state solution to the Israel-Palestine conflict.

To discuss the backlash against Hill and the implications for supporters of Palestinian rights, we caught up with Cornel West.

CORNEL WEST: The important thing is we’ve got to stand with my dear brother Marc. All he’s saying is a Palestinian baby has exactly the same value as a Jewish baby; Jewish baby has the same value as a Palestinian baby. If we can’t have an egalitarian understanding of what it is for a people that have to struggle under ugly occupation on the one hand, and folk who themselves have been hated and despised, but have a responsibility to treating other people with dignity, in this case Palestinians, and to the degree to which we still are unable to have that kind of public dialogue recognizing the humanity on both sides is the degree to which we find ourselves impoverished. So I want to stand very closely and intensely with my dear brother Marc.

JAISAL NOOR: Hill has been accused of being a Hamas supporter, even though he embraces non-violent resistance like the Boycott, Divestment, and Sanctions movement.

MARC LAMONT HILL: Solidarity with the international community demands that we embrace boycotts, divestment, and sanctions as a critical means by which to hold Israel accountable for its treatment of Palestinian people. This movement, which emerges out of the overwhelming majority of Palestinian civil society, offers a nonviolent means by which to demand a return to the pre-’67 borders, full rights for Palestinian citizens, and the right of return as dictated by international law.

JAISAL NOOR: His comments are being equated with support for Hamas. What’s your response to that?

CORNEL WEST: Everybody knows that brother Marc is not a supporter of Hamas. You can love Palestinian people, you can support their rights and their dignity, and that doesn’t mean you’re a supporter of Hamas. I love Palestinian brothers and sisters. I support their dignity. I support their rights. That doesn’t mean that I’m a supporter of Hamas. And for somebody to make that kind of jump is ridiculous. It’s ridiculous. And I just find it sad that people would stoop to that level, to try to attack my brother or anybody else who stands with the Palestinian people. We would do exactly the same thing if there were a Palestinian occupation of Jewish brothers and sisters. That wouldn’t mean we supported Irgun, or a Jewish group killing innocent people. But we would support any people who are occupied. Kashmir. Tibet. Any people who are occupied. That includes our precious Palestinian brothers and sisters. So I’m very, very—in deep solidarity with brother Marc.

JAISAL NOOR: Thanks so much.

CORNEL WEST: Thank you so much.