While harshly condemning the Salisbury nerve agent attack, the Labour Party's leftist leader requested evidence that the Russian government carried it out. A deluge of smears followed.

While harshly condemning the Salisbury nerve agent attack, the Labour Party's leftist leader requested evidence that the Russian government carried it out. A deluge of smears followed. 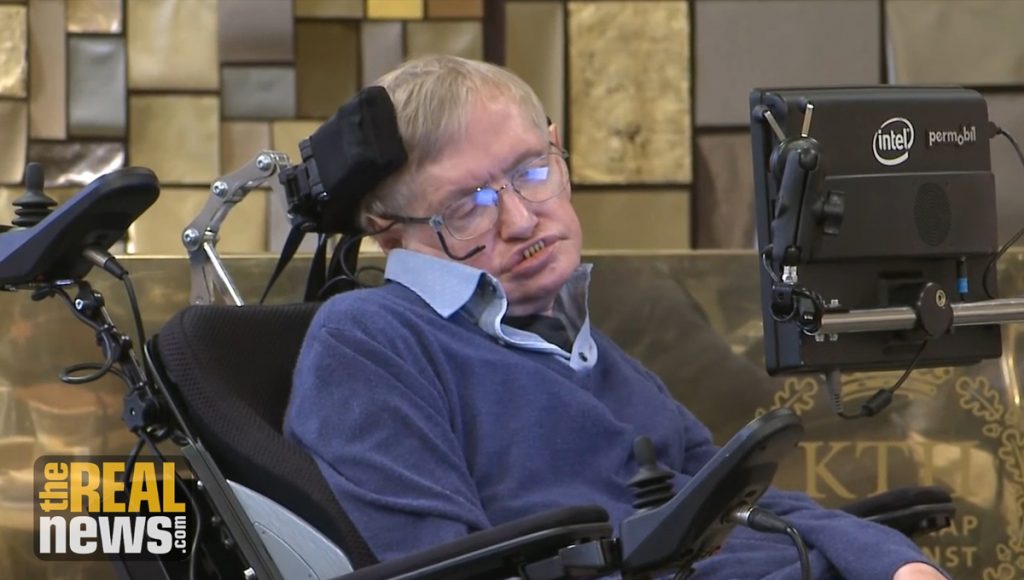 BEN NORTON: One of the world’s most beloved and inspirational scientists, Stephen Hawking, passed away on March 14, 2018.

Hawking revolutionized physics and cosmology, and his tireless resilience in the face of adversity touched the lives of millions of people, leaving behind a formidable legacy that will influence not just science, but humanity as a whole for years to come.

What is much less known about Hawking, however, is that he was also very politically active, and held a variety of leftist views.

He spoke out against numerous wars, called for action against climate catastrophe, and defended socialist programs that help society progress.

In fact, Hawking’s final post in an Ask Me Anything interview on the social website Reddit warned against the dangers of capitalism, and the endless inequalities it creates:

“Everyone can enjoy a life of luxurious leisure if the machine-produced wealth is shared,” Hawking wrote, “or most people can end up miserably poor if the machine-owners successfully lobby against wealth redistribution.”

He was also a strong voice in support of socialized medicine. Hawking frequently called for greater funding for the British government’s National Health Service, and vociferously opposed attempts at privatizing it.

“The more profit is extracted from the system, the more private monopolies grow and the more expensive healthcare becomes,” he explained. “The NHS must be preserved from commercial interests.”

When the US and UK illegally invaded Iraq in 2003, Hawking again condemned the war. At a peace demonstration in London in 2004, he blasted the Iraq War as a “war crime” that was based on “lies.”

In 2013, Hawking even came out in support of the boycott of Israel, on behalf of Palestinian human rights. Despite the ensuing smear campaign and massive backlash, he stood tall for justice.

STEPHEN HAWKING: We are close to the tipping point where global warming becomes irreversible. Trump’s action could push the Earth over the brink, to become like Venus, with a temperature of 250 degrees, and raining sulphuric acid. Climate change is one of the great dangers we face, and it’s one we can prevent if we act now.

BEN NORTON: Hawking was part of a long line of revolutionary physicists who had revolutionary politics. His predecessor Albert Einstein was a committed socialist who admired Vladimir Lenin and who, given his close links to communists, was carefully monitored by the FBI, which compiled a 1,400-page file on him. Hawking’s contemporary Carl Sagan was also a leftist who was committed to popularizing science education for the working class.

Stephen Hawking faced unimaginable physical obstacles, but he always rode over them in his signature wheelchair.

In fact, the physicist regretted never having an opportunity to use that wheelchair to run over the toes of Britain’s notorious right-wing Prime Minister Margaret Thatcher.

Up until his final days at age 76, decades longer than doctors initially told him he would live, Hawking continued his quest to understand the universe, and to make it more just.

STEPHEN HAWKING: The thrill of discovering something no one knew before is like nothing else I know. I want to share my excitement with everyone. My main challenge has been Lou Gehrig’s Disease, or ALS. I have had it since I was 21, but it has not prevented me from exploring the universe with my mind.

BEN NORTON: He was deeply motivated to always keep on fighting not by religion, but rather by a secular humanist worldview. Hawking recognized that we as humans create our world, and it is our responsibility and our responsibility alone to make it a better place.

STEPHEN HAWKING: No one created the universe and no one directs our fate. This leads me to a profound realization: there is probably no heaven, and no afterlife either. We have this one life to appreciate the grand design of the universe–and for that I am extremely grateful.