Communities Seek Solutions to Keep Billionaires Out of Local Politics

The Real News investigates how new laws are fighting the wave of cash pouring into state and municipal elections, and how local public financing of campaigns might work

The Real News investigates how new laws are fighting the wave of cash pouring into state and municipal elections, and how local public financing of campaigns might work 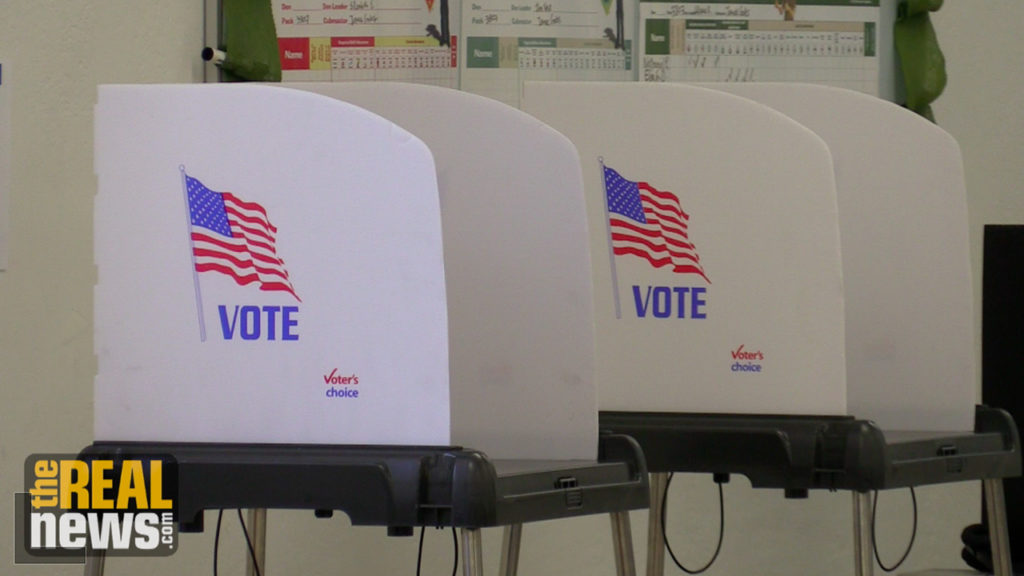 It’s a fair argument to make that mixing money with politics is a recipe for corruption. And on the national level it’s been a losing battle to get big money out of campaigns. But here in our own backyard of Baltimore City there are solutions on the table that just might work.

ROBBYN LEWIS: It is certainly true that in politics in this country decisions are sometimes made depending on where the money is.

TAYA GRAHAM: Covering the 2018 primary in Baltimore we ran into Robyn Lewis. She was running to keep her delegate seat in the Maryland State Legislature’s 46th District, but she faced a formidable and unprecedented challenge: An opponent named Nate Loewentheil had raised a whopping $450,000 to unseat her. For her it was an insurmountable sum.

ROBBYN LEWIS: Money in politics is corrupting. As a relatively new legislator, I can tell you it was one of the most challenging things to come to grips with.

TAYA GRAHAM: And even though she won, the cash horde is a sign that big money is finding its way into local elections.

EMILY SCAR: The cost to run for office at every level has dramatically increased, from City Council, mayor, state delegate. And the thing that’s interesting about that is it’s not that, oh, so many more people are politically engaged and they’re getting so many donors. Actually, it’s driven by a rise in the average donation.

TAYA GRAHAM: Campaign records reveal that Loewentheil had raised a big chunk of his cash from out of state donors due to his ties to the Obama administration. Loewentheil did not respond to our request for comment. But the rising cost of campaigns is not an isolated phenomenon, says Emily Scar, executive director of Maryland Public Research, a national campaign finance watchdog.

EMILY SCAR: Fewer donors giving more money, making campaigns more expensive. So it shuts everyday people out of the process, so your $25 contribution doesn’t really mean much, and it shifts the behavior of candidates. And it makes it so people can’t run for office unless they have access to wealth.

TAYA GRAHAM: According to Scar it started with a Supreme Court ruling called the McCutcheon decision- the country’s highest court striking down all limits on contributions to multiple candidates and PACs for federal elections.

EMILY SCAR: There was a Supreme Court case, the McCutcheon decision, which overturned aggregate campaign contribution limits. So we used to have a law in Maryland htat said you can only spend, I think, $10,000 in aggregate for all campaigns. You can max out for each campaign at $2000. Any donor across the country could give the max in every race they wanted. So big donors in Maryland, for example, they maybe didn’t play in the City Council race, Board of Education race before. And now they can max out at every single race across the state, because the state said they’re no longer going to enforce that aggregate campaign contribution limit.

TAYA GRAHAM: And as a result, money poured in for local candidates, and billionaires like the Koch brothers were unleashed to spend freely on local campaigns- often with national consequences.

But some jurisdictions are trying hard to fight this trend with a local solution. Baltimore City Councilman Kristerfer Burnett is one of them.

KRISTERFER BURNETT: We got a charter amendment passed this summer, early summer, which basically establishes the framework for what will eventually be a public financing fund.

TAYA GRAHAM: He has successfully pushed legislation through the Council that will put a charter amendment on the November ballot that would create public financing for city candidates.

KRISTERFER BURNETT: We also want to make sure that we get people in office that care about rec centers, that care about school funding, and AC, and drinkable water, and comprehensive violence reduction. And oftentimes those folks struggle to get competitive in races.

SHANNON SNEED: It was very hard. It was, like, I don’t come from a family with money. And essentially, you know, my mom could give me, like, $5, and you have friends who don’t make a lot of money as well, because they were nonprofit. And then my friends for a long time were broke. They can’t give money, you know. So I couldn’t go through my friends that I’ve known all this time and be, like, hey, I need you to help me out.

TAYA GRAHAM: As she and other candidates face the prospect of raising larger and larger amounts of money.

TAYA GRAHAM: But the question is how would it work? Emily Scar directs our attention to nearby Montgomery County. There, the recently-passed public finance campaign law matched small donations for eligible candidates and barred big donors. The results showed promise, with several Council candidates and the county executive who won using public dollars. It’s a good start, says Scar.

EMILY SCAR: It was an overwhelming interest in using this program. We had candidates for county executive, including the winning candidate, and candidates for [at large] all races. We had Democrats and Republicans winning using the program, which is a great success.

TAYA GRAHAM: But Baltimore may face other obstacles. We asked Mayor Catherine Pugh, who signed the measure, how the city would fund it. And she says the city has other priorities that are much more important.

CATHERINE PUGH: But for those who might need it, good luck.

STEPHEN JANIS: So you don’t need it because you’ve got plenty of donors, is what you’re saying?

CATHERINE PUGH: No, what I’m saying is that I just respect the right of people to go out and ask their friends and family and others to support them.

STEPHEN JANIS: But do you support having the city having some sort of way for people to publicly finance their campaigns?

CATHERINE PUGH: I don’t know what that way might be. I think what we did was put it on the ballot so people could make a decision as to whether they want to do that or not. And then I think you’ve got to figure out where the resources come from. Because, you know, we’ve got some other priorities in the city as it relates to home ownership, reducing violence in our city, a lot of issues before that.

TAYA GRAHAM: Of course, Pugh has raised a considerable amount of money, according to campaign finance records, much of it from developers and business whose contracts with the city she controls. But Burnett vows to press on.

KRISTERFER BURNETT: That’s the gamble. You’re betting on yourself, that the citizens of Baltimore will have your back. And I think, I believe in that.

TAYA GRAHAM: So that local elections and policy, unlike national governance, can be run by and for the people.

The Real News will continue to explore the solution in other cities. This is Taya Graham and Stephen Janis reporting for The Real News Network in Baltimore City, Maryland.