In a contest against incumbent Petro Poroshenko, the TV comedian Volodymyr Zelenskiy won an overwhelming majority of 73%, signaling a hunger for real change in Ukraine

During the election, Zelenskiy promised to “root out corruption” and adopted a reconciliatory stance between Russia and Ukraine. His wide appeal across classes could have been the source of his margin of victory over Poroshenko, Tarik Cyril Amar told The Real News Network's Greg Wilpert.

“Zelenskiy's support is younger and Zelinskiy has been able to bring in this landslide result...because it has managed to appeal to the mass of Ukrainians who have been impoverished and who feel deprived and who are anxious about economic developments,” Amar said. “Poroshenko had in essence nothing to offer to these people. Zelenskiy promised things such as, for instance, communal tariffs and service costs would go down again. It's a question of whether he can deliver that—it's a very open question actually—but Zelenskiy's class base is clearly broader than Poroshenko now.”

Ukrainian desire to resolve the ongoing conflict with Russia also helped garner support for Zelenskiy: "Zelenskiy's electorate may not be pro-Russian, but is very much in favor of being more active in looking for a way to end the conflict in Eastern Ukraine," Amar said. “Russia needs to participate in ending the conflict, but there are also rebels and separatists in that region that Zelenskiy will have to deal with.”

The most extreme opposition is among Ukrainian nationalists and neo-Nazis. Wilpert observed that the Ukraine is the only country in the world other than Israel in which both the president and the Prime Minister Vladimir Greisman are Jewish—notable because of the Ukraine’s far right factions and neo-Nazi Azov Battalion.

“Zelenskiy has even made fun of the far right in his television show, where he of course also plays the president. The episodes where that happens were actually broadcast just before the election,” Amar said. “So there is, I think, generally a reaction against the sort of oompah nationalism that the far-right stands for. I am not sure in how far that is directly related to the fact that Zelenskiy himself is Jewish.”

Amar observed that Zelenskiy has been careful not to entirely antagonize nationalist voters and despite a large majority vote, the far right remains powerful. Andriy Parubiy, chairman of Ukrainian Parliament, a former neo-Nazi now considered a liberal who has maintained ties with the far-right, has come out against Zelenskiy.

"Parubiy, the speaker of the parliament—an important position in Ukrainian politics—has come out today with a press conference that in implicit terms is very much a declaration of war against the president,” Amar said. “It is all couched in political language and in legal language, but Parubiy has made it very clear that he sees the Parliament as the bastion to be had against this president." 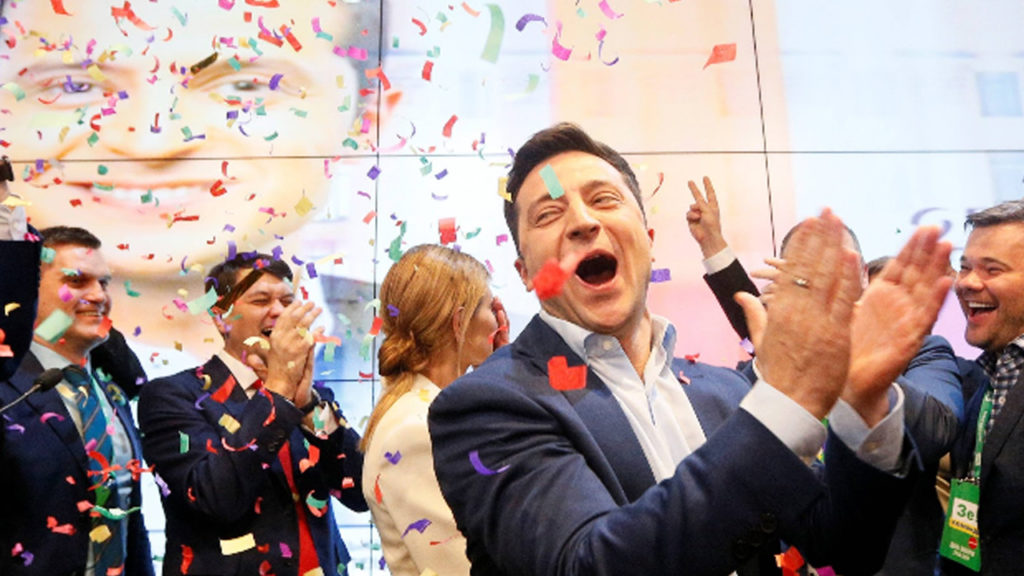 GREG WILPERT It’s The Real News Network and I’m Greg Wilpert in Baltimore. A television comedian won Ukraine’s presidency on Sunday. Volodymyr Zelensky got 73 percent of the vote, compared to 25 percent of the vote for the incumbent, Petro Poroshenko, who has conceded the election. Zelensky is a comedian with no political experience who played Ukraine’s president on a popular television series in the Ukraine. As a candidate, it was relatively unclear what Zelensky stood for except that he promised to root out corruption and take a more conciliatory approach towards Russia, which has been in conflict with Ukraine ever since 2014 when a pro-Russian government was overthrown. There’s speculation that one reason the incumbent, Petro Poroshenko, lost so big is because a court ruled that his nationalization of Ukraine’s largest bank, PrivatBank, was ruled illegal shortly before the election. Joining me now to analyze the election result in the Ukraine is Tarik Cyril Amar. He is Associate Professor of History at Koc University in Istanbul, Turkey and the author of the book The Paradox of Ukrainian Lviv: A Borderline City between Stalinists, Nazis, and Nationalists. Thanks again for joining us, Tarik.

GREG WILPERT So when it comes to the relationship to Russia and the European Union, it’s difficult to find much difference between the two runoff candidates, Poroshenko and Zelensky. Poroshenko had pushed a very defined agenda against Russia but during the last debate, Zelensky asked Poroshenko, “why is your chocolate sold in Moscow,” and won a lot of applause. Now is Zelensky somebody who’s changed his tune a little bit and proposing a more extreme pro-European Union, anti-Russia line?

TARIK CYRIL AMAR No, I don’t think so. I think that is basically electoral rhetoric. Zelensky has an electorate, or at least a large share of Zelensky’s electorate, may not be pro-Russian but is very much in favor of being more active in looking for a way to actually end the conflict in eastern Ukraine. The conflict in eastern Ukraine has a Russian dimension. That is true, and it cannot be ended without Russia participating in that. But at the same time, it also has domestic sources in those areas among rebels and separatists. I think that Poroshenko’s defeat is to a large extent due to the fact that many voters were discontent, precisely with the fact that the war is still dragging on. Zelensky is likely to be careful. He doesn’t want to antagonize voters who are more patriotic or more nationalist. He also has to be careful not to mobilize the far-right against himself. You will find statements that clearly cater, as it where, even to that audience. But my sense from what he has been saying on the whole is that it’s still true that he is more open than Poroshenko was to try to reset the negotiation processes that are under way in the Normandy Format and in the Minsk Format.

TARIK CYRIL AMAR Zelensky’s support is generally— let’s get two things out of the way before the class issue. Zelensky’s support is much more comprehensive, regionally. It now really cuts across all of Ukraine except a very small part of the territories of Ukraine in the extreme west. Zelensky’s support is younger. And Zelensky has been able to bring in this landslide result— unprecedented in the history of Ukrainian independence. He has been able to bring this landslide result only because he has managed to appeal to the mass of Ukrainians, who have been impoverished, and who feel deprived, and who are anxious about economic developments. We can see this very, very clearly in the polls. Poroshenko had in essence nothing to offer to these people. Zelensky promised things. For instance, communal tariffs and service costs would go down again. It’s a question of whether he can deliver that. It’s a very open question, actually. But Zelensky’s class basis is clearly broader than that of Poroshenko now.

GREG WILPERT Now the Ukraine is the only country in the world other than Israel in which both the President and the Prime Minister, Volodymyr Groysman, are Jews. Zelensky didn’t conceal his Jewish background during the campaign. Jews actually are a very small minority in the Ukraine though. Do you think people voted for Jewish politicians partly also as a way of expressing their disgust of the rise of neo-Nazism and anti-Semitic militias in the Ukraine, such as the Azov Battalion?

TARIK CYRIL AMAR Well I have not seen evidence of voters positively making a decision in favor of Zelensky to express their resistance to the rise of the far-right. But it’s clear that Zelensky’s Jewishness— as you say, he has by no means concealed it— has not kept them from voting for him in very large numbers. Zelensky has even made fun of the far-right in his television show where he also plays the president. The episodes where that happens were actually broadcast just before the election. So there is, I think, generally a reaction against the uber nationalism that the far-right stands for. I’m not sure in how far that is directly related to the fact that Zelensky himself is Jewish.

GREG WILPERT Now I just want to turn for a moment to the situation in southeastern Ukraine, which has traditionally had a significant proportion of the population that are ethnic Russian or also Russian-speaking Ukrainians. There are reports also that, as I mentioned before, the neo-Nazi Azov Battalion is quite active and engaging in violence against people there. Tell us a little bit about what is happening there and whether that might have had an effect on the election in terms of turnout and who won the election.

TARIK CYRIL AMAR So turnout has been good. If you compare it with prior Ukrainian elections, it’s been solid. Zelensky has won, as we know, by a landslide. If the far-right tried to threaten and intimidate people anywhere, then they would have done so clearly against Zelensky. We have had a few reports of that sort; for instance, as a mass message being sent to the heads of polling stations and threatening them just before the election. But if you look at the result, whatever the far-right may have been doing there, it clearly wasn’t successful. Zelensky has still carried the day with the large majority. That unfortunately doesn’t mean that the far-right is not in play any longer. It may very well come back. When Zelensky runs into the first difficulties, as is predictable— for instance, over the issue of the War in Donbass, which you mentioned at the beginning. The fallout is still going on. It may also play a role again if there is or if there should be a major conflict between the new President Zelensky and the parliament because the speaker of the parliament is a former neo-Nazi. He’s usually called a former. He now is supposed to be a liberal, Andriy Parubiy. His past is very, very clear on this account and I don’t think his being a former neo-Nazi is as clear as some Western observers think. It is very interesting that Andriy Parubiy, the speaker of the parliament, an important position in Ukrainian politics, has come out today with a press conference that in implicit terms is very much a declaration of war against the president. It is all couched in political language and in legal language, but Parubiy has made it very clear that he sees the Parliament as a bastion to be had against this president.

GREG WILPERT Okay. That’s all the time we have for today, but I’m sure we’ll come back again. I was speaking to Tarik Cyril Amar, Associate Professor of History at Koc University. Thanks again, Tarik, for having joined us today.

As Ukraine’s Presidential Race Heats Up, Politics Shift to the Right