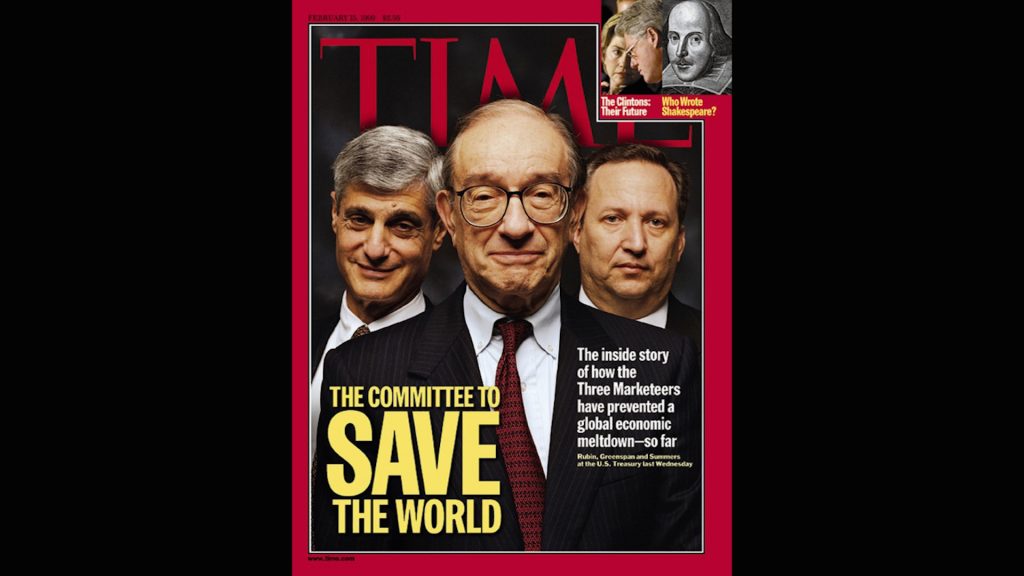 PAUL JAY: Welcome to The Real News Network. I’m Paul Jay. This is Reality Asserts Itself, and we’re in New York.

In her 2016 book “Makers and Takers: The Rise of Finance and the Fall of American Business,” Rana Foroohar writes:

“By the late 1990s, the world was in the midst of yet another emerging-market crisis, this time brought on by the further deregulation of global capital flows orchestrated by the Clinton administration. (Treasury secretary Rubin and his deputy and then successor, Lawrence Summers, were principal architects of these measures, and finance lobbied vigorously for them.) Too much money had flowed into the markets too quickly, ending up in speculative projects that were now going bust … Amazingly, though, instead of widespread criticism for their choices, Greenspan, Rubin, and Summers got a love letter in the form of a 1999 Time cover story entitled ‘The Committee to Save the World.’

“So fully were the media and the government enthralled with finance that nobody seemed to raise an eyebrow when Citibank’s Reid and Travelers Group’s Sandy Weill announced the creation of the world’s largest financial institution—Citigroup—in the midst of a crisis that showed just how risky such entities could be.

“Reed and Weill employed another time-tested strategy, telling government that banks needed more room to roam precisely because of the problems in the market … Banking had to get bigger in order to thrive. This line, coupled with vigorous personal lobbying, yielded the ultimate triumph for finance: in November 1999, Clinton abolished Glass-Steagall, eliminating the last vestiges of Depression-era regulation. A month earlier, Rubin (fresh off his Treasury job) became cochairman of Citigroup, a move that would net him $15 million and 1.5 million shares of stock in his first year.”

Now joining us again in the studio is Rana Foroohar. Thanks for joining us.

RANA FOROOHAR: Thanks for having me.

PAUL JAY: So in the first segment we talked a bit about some of the key legislation. There’s always sort of this dynamic, is it the legislation that opens the door for the kind of growth and changes in finance? Or does the growth in finance create the conditions that gives them the power to get the legislation. And it’s probably both, is the answer.

PAUL JAY: But I think it’s important in the power of finance and how pervasive this is throughout the economy, this has very little to do with Republicans and Democrats. In fact, some of the key opening doors for finance happened in the Clinton administration.

RANA FOROOHAR: Absolutely. I mean, if you look back just to the ability of too-big-to-fail banks to be formed, that was something that happened under Clinton. The roll back of Glass-Steagall which was the Depression-era legislation that had really kept the financial system, I would argue, safe for some time.

PAUL JAY: And real fast, what that is.

RANA FOROOHAR: Glass-Steagall was the, it came out of the Great Depression. And basically it put investment banking, which is kind of where riskier trading lives, and commercial banking, plain vanilla It’s a Wonderful Life kind of banking, to be simplistic, put those in two separate baskets. And so you couldn’t have these banks that were doing plain vanilla lending that was taxpayer subsidized and backstopped by the Federal Reserve and the FDIC, you couldn’t have that in the same house as the risky casino-like trading. Under, again, under Bill Clinton, that was Bob Rubin, Treasury Secretary, that was rolled back. And you know, I mean, the huge scandal was, of course, that Rubin left weeks later to become the head of Citigroup and profited to the tune of $100 million from this very rollback.

Now, you could argue, and they did argue back then, that the financial sector had become such an important competitive advantage for the US that we needed to empower it. And there’s always a big debate. You know, London’s going to eat our lunch. We’ve got to protect New York. You know, what was interesting is after the dot com crash, London, which actually had lower standards even than New York, suffered disproportionately. They had all kinds of dodgy Russian companies IPOing, Chinese state-owned enterprises that weren’t backstopped well. So you know, the very prudential regulation that banks often say we don’t want, we don’t need, is what actually can give you a competitive advantage in the market at times like this.

RANA FOROOHAR: Well, Citigroup’s interesting. It was kind of there at every major turning point. Citigroup was, it played a role in City National, or actually it was National City at the time of the Great Depression, played a role in the run up to that crisis. It played a role in lobbying following that. The breakup of Citigroup sort of tracks this safer period in the banking sector from, say, the ’30s to the ’70s.

And then when Walter Wriston, who was a former CEO of Citigroup, came in in the ’70s and became sort of the model for today’s more glamorous bankers. You know, I keep seeing ads in the subway for Billions, which is this new HBO show about, or a Netflix show about financiers. And he was kind of the prototypical financier, with the fast red car and the beautiful TV anchor wife and, and so on and so forth. So that marks a period where banking went from being the It’s a Wonderful Life model to more of the glamour model that you saw. And Citi, and Citi’s rise really tracked that entire process. And then, of course, when the great financial crisis came there was the famous quote from the Citibank CEO that as long as the music is playing you’ve got to keep dancing. You know, you have to keep, keep moving around.

So Citigroup, I have an entire chapter on their history, is just a wonderful lens into one institution that kind of exemplifies finance in America, I would say.

RANA FOROOHAR: Well, part of it, interestingly, came out of this period in the ’70s where you started to have a deregulation of the financial sector. Politicians wanted more money to flow into the economy. They did that in part by opening the doors to foreign capital. Citigroup was very big in some of the deals in the 70s and in the 80s that let a lot of emerging market money in, a lot of Gulf money in. And it also played an important part in some of the foreign banking scandals. The peso crisis, various national emerging market, national emerging market debt scandals. You could often find Citi’s footprints on that.

And you know, like so many of the big banks, which, by the way, are even bigger now. You know, we should, we should stop and say that you would imagine that 2008 would have been the apex of the too big to fail banks. In fact, all it did was create an environment in which the larger ones could actually eat up the smaller ones.

PAUL JAY: And they’re far bigger now than they were.

RANA FOROOHAR: And they’re far bigger. They have, individually they have much more lobbying power than they did. JP Morgan, actually, is probably, I would say, the strongest financial institution in terms of its political clout right now. I mean, you saw in the last few years Jamie Dimon literally being, who’s the CEO of Citibank, being able to call up Washington and, you know, work riders into the budget bill at his at his behest because there’s so much power.

PAUL JAY: You mentioned in Part 1 a meeting you were at where a representative of the Obama administration said don’t worry, Dodd-Frank, it’s all OK now. Not only was Dodd-Frank not OK, and not only was it Swiss cheese, as you and others have described it, and I think in your book you think, most of it, any company with a bunch of good lawyers could figure out their way around the rules. But now under Trump and the Republicans it looks like there won’t even be that.

RANA FOROOHAR: Well, exactly. And you know, of course it’s been somewhat easy for both folks on the left and the right to argue, well, the current system is broken. Maybe we should just throw it out. You can make that argument. And I did make that argument. I do think that simplicity is really, really important when it comes to financial regulation. The banks would love you to think that there is no simple way to regulate a bank. It’s oh my gosh, it’s too complicated, you can’t possibly understand it.

But believe me, you know, I’ve been a business journalist for 25 years. When bankers start throwing around acronyms, complicated terms, you know, making you feel badly for asking dumb questions, it means that you’re on to something and that you’re asking the right questions. And the real question is how do we craft a financial system that supports the real economy? That’s really the only question that matters. Tier 1 capital leverage ratios, these can be gamed and manipulated until the cows come home, and they are right now. What we really need, I think, is essentially two things. We need a clear narrative, which is finance should support the real economy. We need banks to be holding enough capital, enough cash on their own balance sheets, to actually support themselves if there should be a crisis.

And it’s interesting. If you go back to the 1920s financial crash and the Great Depression, one interesting point is none of the big New York banks went under. And that’s because their leverage ratios were far better than they are today. I mean, today your average bank does business with 95 percent borrowed money on a daily basis. It’s hard to think of any other industry that you could get away with working with 90, I mean, not even 50 percent borrowed money in most other industries would be considered reasonably safe. And yet here’s an industry that sits at the center of our economy that works with 95 percent borrowed money. Well, they should be able to hold at least, you know, 15-20 percent of an asset base against their potential liabilities, and then maybe taxpayers wouldn’t have to bail them out. That’s point number two.

And then point number three is I think we’ve got to have a clear line between risky trading and plain vanilla lending. I mean, that’s just kind of common sense. You don’t do taxpayer insurance when hedge fund guys are trying to deal in dodgy Russian debt. It’s just, it’s just not a good idea.

PAUL JAY: In the next segment we are going to talk about the profound debt around the world, and in the Unites States and just what that means in terms of the coming crisis so please join us for the next in our series of in terviews with Rana Foroohar on The Real News Network. 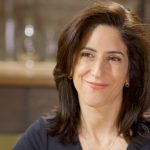 Rana Foroohar is an associate editor and global business columnist for The Financial Times, and CNN’s global economic analysts. She’s the author of “Makers and Takers: The Rise of Finance and the Fall of American Business.”